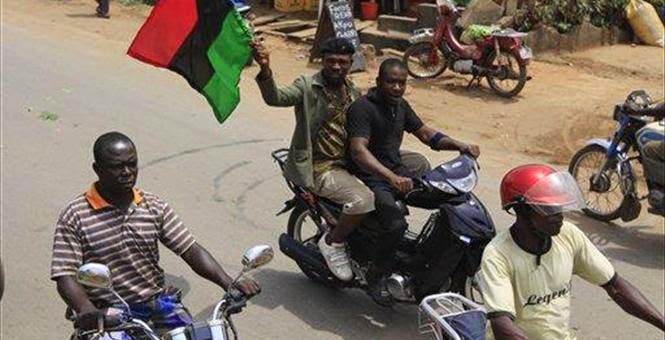 What would you say to the Founding Fathers who gathered in Philadelphia to craft the Declaration of Independence knowing that it would mean war with England? Would you have told them to wait, to keep trying diplomacy, or to wait for England to leave them alone? Would you support their taking up arms to protect their people and their rights? Thank God, they justified and supported the war for independence that made America free.
While the world is once again preoccupied with tensions in the Middle East and in the Ukraine, there is a growing call for independence for Biafra. Nnamdi Kanu, the Director of Radio Biafra, is the world-wide voice for the indigenous people of Biafra (IPOB) in the south and southeast of Nigeria. They are weary of seeing their women raped, their churches burned, and their villages bombed and terrorized.
They remember the 1967-1970 Biafra-Nigeria Civil War that resulted in the genocide of over 3 million IPOB Christians while the world was focused on Vietnam and the conflict in the Middle East. Once again, they’re seeing buses of Muslim terrorists/cattle herdsmen vandalizing their farms and villages. Thankfully, six have been arrested when two bombs were found and defused at the Living Faith Church,popularly known as Winners’ Chapel, in Owerri, Nigeria.
Enough is enough. The IPOB are ready to defend themselves. To the largely Christian population in Biafra, the concept of a Holy War is not a theoretical discussion; it is a matter of survival and freedom from the Islamic Caliphate that is sweeping the Middle East and Africa. But they know that any declaration of Independence is but a piece of paper; independence must be earned.
Why focus on Nigeria when ISIS has aggressively secured a beachhead in Syria and Iraq for their self-proclaimed Islamic caliphate united under Sharia Law? The Middle East is but the tip of the iceberg in the drive for an Islamic caliphate. For years, Africa has been a target of the extremists’ dream of a unified Africaunder Islamic control.
The brazen attacks on Christians and moderate Muslims by Boko Haram in Nigeria have been happening for years. In 2012, Secretary of State Hillary Clinton had been reluctant to label them a Foreign Terrorist Organization (FTO) for fear of cutting them off from diplomatic contact.
Only the reported abduction and threat to sell 200 young Nigerian women into slavery or forced marriage has awakened the western media. The comments by video in May of Boko Haram’s leader, Imam Abubakar Shekau, speaks of their all too public mission:
“You infidels of the world, you have met a trouble, we must follow Allah, and you should die with bitterness. Brethren cut out infidels from their necks, brothers you should capture slaves; just because I took girls in western school they are worried. I said they should even desert the school, they should go and marry. Nonsense, I am the one that captured your girls and I will sell them in the market. I have my own market of selling people; it is the owner that instructed me to sell. Yes, I will sell the girls people, I am selling the girls like Allah said until we soak the ground of Nigeria with infidels blood and so called Muslims contradicting Islam. After we have killed, killed, killed and get fatigue and wondering on what to do with smelling of their corpses, smelling of Obama, Bush, Putin and Jonathan worried us then we will open prison and be imprisoned the rest. Infidels have no value. It is Jonathan’s daughter that I will imprison; nothing will stop this until you convert. If you turn to Islam then you will be saved.”
When Britain laid out the borders in Africa for the breakup of its empire, countries were not formed to help build viable nations. Nigeria was formed as a dysfunctional colony that combined naturally competing peoples in a way that would sow perpetual discord and allow Western companies to freely take advantage of the natural resources they treasured.
As Nigerian Ambassador Bola Dada asserted, “Our problem is not leadership, it’s our weak foundation. No one can govern Nigeria successfully now because of the faulty foundation. So the foundation has to be pulled down before we can see any way out.”
The current Christian President, Goodluck Jonathan, has been neutered. He wants a united Nigeria, but he has no real power. Under the alleged support of sponsors like General Babangida, known as IBB, Islamic extremists have infiltrated the armed services, police departments and the political administration. Their mission is clear–protect Islamic extremists and Boko Haram. It’s no wonder that Islamic terrorists are expanding their attacks throughout Nigeria.
This demand for the independence of Biafra is far from new. In March 2008, 145 countries voted to support the United Nations Declaration on the Rights of Indigenous People. Although not supported by President George W. Bush, President Obama endorsed UNDRIP in 2010.
The people of Biafra want independence and are asking for help around the world. The IPOB can trace their roots in Judeo-Christian heritage to the lineage of Jacob, one of the founding patriarchs of both faith communities.
The fight for Biafra independence provides a tangible way to thwart the drive for an Islamic caliphate in Africa. It’s time once again to support a people whose time for independence has come. It’s not our fight, but, with UN justification, it’s a fight we should support.