BIAFRA: ONLY TRAITORS, QUISLINGS & COLLABORATORS WILL BE AT OHANEZE AWKA SUMMIT BUT THEY WILL NEVER GO UNPUNISHED – IPOB 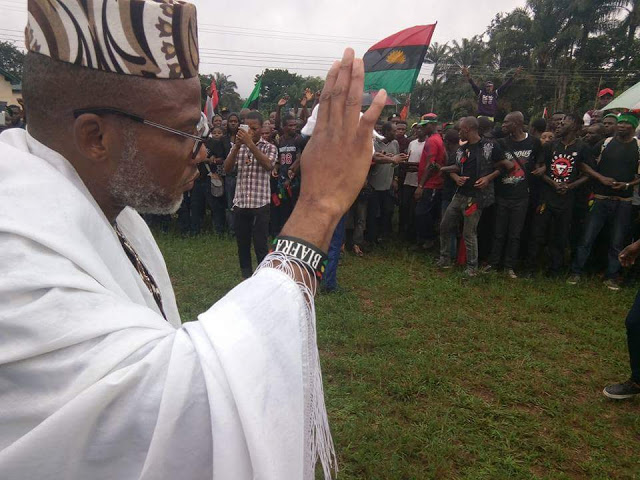 Careful observation reveals that the few corrupt people organising the Hausa Fulani sponsored Ohaneze Ndigbo Summit are those whose parents and grandparents collaborated with the British conquerors when they came into our land in the late 19th century. We must remember that before the British colonized us they first conquered our land. The fathers of these modern collaborators were made servants at the homes of British colonial masters and Warrant Chiefs to serve white man’s interest and enslave our people contrary to the traditions and culture that sustained our civilisation for over 5,000 years. These same group of inbred agents of the oppressor is at work in Ohaneze Ndigbo today.
When Arochukwu fell, the forebears of these modern day collaborators benefited and hurriedly attached themselves to White missionaries in order to help complete the subjugation of their own people. They became agents and informants for Nwa-DC or District Commissioner and in return were made clerks or Kotuma to the colonial courts. Therefore only those born into these families with long history of treachery and sabotage in their blood will attend the Aso Rock sponsored Ohaneze summit in Awka on Monday and they will pay a terrible price for it in the weeks and months ahead.
We shall compile the names of all keynote speakers at the event to add to the register of all those that have over the years been betraying our people, especially the individuals that packaged and executed Operation Python Dance. Anybody seen delivering a speech at Awka will be deemed to have collaborated in the death of hundreds of IPOB members as a result of Operation Python Dance and will be a marked man. It’s not a question of if but when they will pay for their treachery. They and their children, including those living abroad, will go down the same way they conspired and killed hundreds of IPOB family members.
When the time comes, there will be no pity and no mercy for these traitors and their children. Whereas previous generations allowed these collaborators to live, IPOB will make sure they pay for their iniquities against the people. No sensible person will identify with Nnia Nwodo in Awka unless he or she is a sell-out like he is.
A so-called leader that collaborated with the oppressor to invade his land like Afonja did in Illorin that cost Yoruba people Kwara State till today is exactly who Nnia Nwodo is. Without Fulani soldiers Nnia Nwodo would never be in Awka in the first place not to talk of dreaming of holding a summit. But at least Monday the 21st of May 2018 will prove to the world that Nnia Nwodo is a puppet of the caliphate because Fulani not Igbo soldiers will come to protect him.
Neither Arewa Consultative Forum nor Afenifere ever boasted that Fulani army will protect them, which shows that they are widely accepted as the authentic mouthpiece of their people unlike Nnia Nwodo who is exclusively an agent of the North. History will record that in the year 2018, Hausa Fulani soldiers were invited by a supposed Igbo leader to give him protection in a public gathering in his own land. What an abomination!
This will forever seal the status of Nnia Nwodo as a slave of the Fulani caliphate. Nnia Nwodo’s attempt to officially turn Igboland to Fulani Protectorate on May 21, 2018 will be publicly resisted by die-hard IPOB. The spirit of victims of Operation Python Dance, killed with the active connivance of Ohaneze Ndigbo are watching us to see if we will let them down.
Isn’t it shameful that Nnia Nwodo is going from house to house in Enugu begging our more respected elders to follow him to Awka, boasting that Fulani soldiers are coming to protect him.
To allow Ohaneze Ndigbo to hold this summit means we have surrendered Biafraland to Fulani caliphate forever and ever. On Monday Nnia Nwodo will rely on his Fulani masters from the Sahel to protect him as the Yoruba traitor Afonja did at Illorin but we IPOB own the land and rely on the people of Biafra through the grace of Chukwu Okike Abiama to protect us and our land from our oppressors and collaborators within.
COMRADE EMMA POWERFUL
MEDIA AND PUBLICITY SECRETARY
Facebook
Twitter
LinkedIn
PrevPreviousWhy Nnia Nwodo Insist On Holding Ohanaeze Awka Summit At The Expense Of The Blood Of Igbo Youths
NextIPOB Thank All Those Who Contributed To The Success Of Today’s Outing, As Ohanaeze Bow In ShameNext