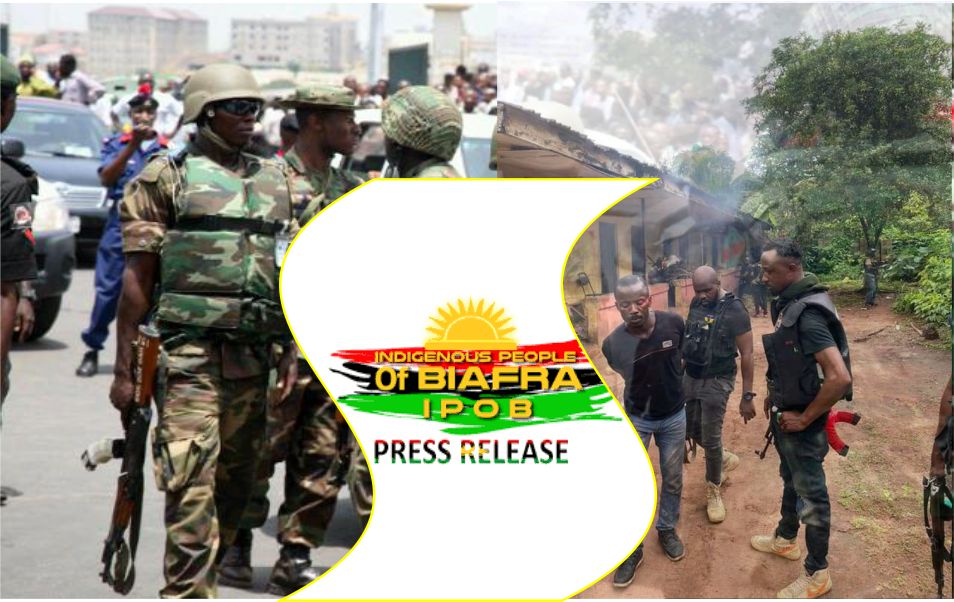 The Indigenous People of Biafra (IPOB) ably led by our indomitable leader, Mazi Nnamdi Kanu wishes to place the world on notice, of the ongoing abductions and secret killings of Biafrans especially Igbo youths by the Nigeria security agents, and tagging them unknown gunmen.

These compromised and Fulani-controlled security operatives move from house to house and abduct Igbo youths, whisk them away to their slaughterhouses and later dump their corpses at mortuaries as unknown gunmen.

It is very unfortunate, that DCP Abba Kyari and co are killing cults members and forcing them to answer ESN and unknown gunmen, the man they are parading as ESN is a cult member and can never be ESN, two months ago the two groups of cultists fought and killed each other and burnt two members to ashes but unfortunately, one of them was caught at Owerri by Abba Kyari and group and they tagged him ESN and unknown gunmen.

What is wrong with Nigeria police and army in this country? Because of this young man they were forced by police to answer ESN and unknown gunmen to deceive the gullible Nigerians who are not connected to information and attracted praises from the public.

These terrorists in military and police uniforms are raiding communities and set people’s houses ablaze claiming they are attacking ESN camps and hideouts, these two face security operatives in Nigeria are perpetrating evil and attacking individual houses in the name of fighting IPOB, ESN and unknown gunmen in Mbieri Mbaitoli LGA Imo State.

Nigerian security agencies led by DCP Abba Kyari have invaded three communities in Mbaitoli LGA in Imo State and burnt their properties worth millions of naira. We’re calling on Human Rights organizations across the globe and other relevant stakeholders in the world to take a record of what the Nigeria army and police are doing in so many peaceful communities in Imo State because nobody should blame us by the time we start getting them down which is not far from now.

We have severally said that ESN stays in the forests where they are keeping their appointments with terrorists and killer herdsmen, anyone looking for them should simply go to the forests and encounter them.

How will the Nigerian security agents who cannot withstand bandits in the North be zealous in killing innocent Biafrans of Igbo extraction in the south? These atrocities have been going on for too long but we won’t tolerate it anymore.

We, therefore, warn perpetrators of these evil agenda to retrace their steps immediately or brace up for stiff resistance. This is a secret genocide orchestrated by the Fulani-controlled federal government to depopulate Ndigbo before the coming of Biafra. Despite the daily slaughter of security agents mainly of Southern origin in the North by bandits and terrorists, the Nigerian military or police have never embarked on mass arrest and killing of youths and residents of the crime scene.

Unfortunately, the treacherous political class has kept mute over this atrocity. But IPOB cannot keep quiet. The intention of the masterminds of this crime against humanity is to weaken the South East and pave the way for its long-planned invasion by jihadists. But they will not succeed, we promise them hell for this cowardly act of victimising innocent Igbo youths for the activities of unknown gunmen.

How many times have youths in Zamfara or Katsina or Kaduna been arrested and killed for the activities of bandits? Why is the Fulani controlled federal government treating the Igbo as slaves and the whole world is watching helplessly?