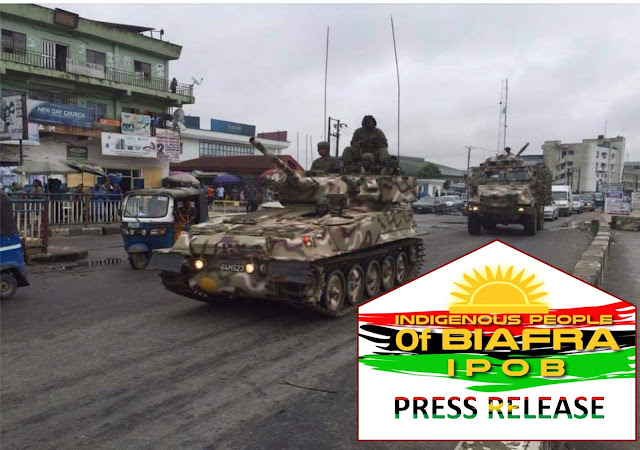 We the global family of the Indigenous People of Biafra (IPOB) wish to advice the Fulani dominated military hierarchy in Nigeria led by Tukur Buratai that constant harassment and killing of innocent civilians in the East will not make up for their failure to deal with insurgency and terrorism ravaging the North where they come from. Any reasonable society would have noticed by now that these meaningless military exercises designed to torment civil society is a tactical diversion to cover up the failures of the Nigeria Army in tackling Fulani terrorism. The plan is to give the world the misleading impression that insecurity is affecting every part of Nigeria and Biafraland when that is not the case.

Announcing countless and meaningless military operations within the borders of Nigeria is indicative that this army headed by Buratai are cowards and instruments of suppression and intimidation. Civilised democratic countries set up their armies to fight external enemies and protect their borders but in Africa as with all developmentally backward parts of the world, national armies are being used to oppress the civilian population of which Nigeria is a prime example.

Buratai’s cowardly and incompetent army of occupation should be reminded that all they have succeeded in doing is turning the Nigerian military into a laughing stock because announcing exotically named military operation after military operation within a civilian space is making it appear more like a television drama series than a serious initiative. They should stop fooling themselves and reveal the motive behind these countless invasions of Biafraland which is to aid Fulani terror herdsmen to acquire and consolidate farmlands forcibly taken from non-Fulani communities in the south. The world must know that we are seriously engaging these band of terrorists in Ebonyi State where they continue to enjoy the protection and help from their fellow Fulani terrorists in uniform in their quest to Islamise Ebonyi State and wider Biafra with the help of the state governor Dave Umahi.

Not long ago, earlier this year, Operation Python Dance 3 was launched by this same bumbling and roundly incompetent Buratai, which ended up accomplishing nothing in terms of their stated aim of eradicating IPOB using military force. All they succeeded in achieving is raping of young women, extortion and mindless thuggery against defenceless citizens. It has now been firmly established that the Nigeria government and her security forces especially the murderous Fulani soldiers in Nigerian Army uniform cleverly designed these never-ending episodes of military action against innocent civilians to ensure they continue the elimination of Biafran youths with the blessing of South East governors and Ohaneze Ndigbo. This is the intention behind this ongoing Operation Python Dance 4 and Operation Crocodile Smile in Biafraland.

In 2017 this same Nigerian Army with active connivance of South East governors and Ohaneze Ndigbo used Operation Python Dance 2 as cover to attempt the assassination of Mazi Nnamdi Kanu and elimination of hundreds of Biafrans of which 28 gallant men fell at Isiama-Afaraukwu Umuahia in Mazi Nnamdi Kanu’s compound during the invasion.

At a time when Nigerian army is being roundly defeated on all fronts by Boko Haram, culminating in some soldiers fleeing from battle and recourse to Saudi spirituality as a means of combating their self made insurgency, Fulani caliphate have instead chosen to display the bravery of their army against unarmed innocent civilians in Biafraland.

It important that Biafrans know that this recent Operation Python Dance 4 in Biafraland is the brainchild of the Fulani caliphate and their slaves in Igboland  Dave Umahi, Nnia Nwodo with the usual brigade of Efulefus that will stop at nothing to ensure that Biafraland is reduced to another vassal colony of the caliphate like Illorin the same way Ukpabi Asika did before them. These quislings know their days are numbered and as with every traitor in history, they must face their fate at the right time. We will never forgive nor pardon them.

In the north, their governors are busy proudly and openly negotiating with known killers, bandits and terrorists but in Biafraland Dave Umahi, Willie Obiano, Okezie Ikpeazu and Nnia Nwodo are busy colluding with northern military officers to kill their own people.

There is no insecurity in Biafraland save for those introduced by land grabbing Fulani terror herdsmen, aided and abated by South East governors.

We know Nigerian military have no shame and will continue to flex their muscle against unarmed peaceful civilians while running away from engaging Boko Haram in battle in the north. Boko Haram are rampaging and killing lives in the north. There are overcrowded IDP camps and abandoned villages in the Arewa core north but the senseless Nigerian army are in Biafraland extorting money from motorists and committing all manner of unspeakable atrocities.

We IPOB are not relenting in our exposure of the inadequacies and unconscionable actions of this Buratai led Nigerian army until the world is firmly aware of what obtains in Nigeria. Exposing and making sure the whole world knows about the evil plans of Nigerian government and her security agencies against the people of Biafra is our responsibility and that we shall continue to do.

There is peace in Biafraland except for where Fulani terror herdsmen are wreaking havoc in Ebonyi State. It is therefore unacceptable that Nigerian army should be running around in armoured vehicles and tormenting innocent civilians when they should be combating insecurity in core Arewa North. What exists in Nigeria is a Fulani Islamic army of occupation not a national army by any stretch of the imagination. It is, therefore, the duty of the masses to resist them as we IPOB are doing.

Facebook
Twitter
LinkedIn
PrevPreviousFulani dominated Nigeria security apparatus in Biafra land: A tool of intimidation in furtherance of their Jihadi agenda
NextOnitsha Inferno: We Commiserate with families that lost their loved ones – IPOBNext