DIRECT MESSAGE FROM THE LEADER OF THE IPOB NNAMDI KANU, URGES PROTEST TO CONTINUE 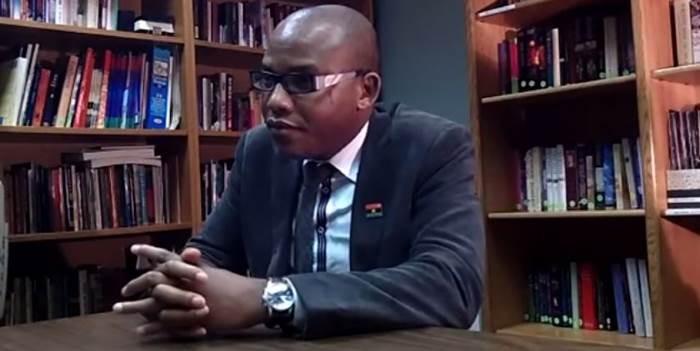 …Orders that no Biafran should attend the purported meeting called by Okoroawusa.

The Supreme leader of the Indigenous People of Biafra, who also doubles as the Director of Radio Biafra, Nnamdi Kanu, currently being extra-judicially detained by the private army of President Muhammadu Buhari, the Department of State Security (DSS),  is hale and hearty and in very high spirit.
We can report authoritatively that Nnamdi Kanu is being treated by the DSS as a “delicate and complex” (VIP) prisoner of conscience.
Our team after several attempts was able to meet with the radical leader of the Indigenous People of Biafra at the facility where he is being held against his wish.
He was beaming with smiles upon seeing our team and was as undaunted and fired-up as ever. He was completely in the dark as to the protest going on as a result of his arrest. But when he was briefed he said it was in line with his thought and urged that hell should be let loosed.
He admitted that he has been well respected and treated by the detectives. He is being detained in an average hotel room size kind of cell, fitted with air conditioner; fan and television set that shows only Nigerian Television Authority (NTA) station. His meals according to him were tested by the person(s) serving them before he eats and that he takes only bottled water from NBC, which the men of DSS corroborated later in our conversation with them.
From our interaction with some of the DSS operatives, they accepted the fact that the bail conditions have been met but maintained that they needed to authenticate the title documents presented whether or not they were genuine, insisting that they would have to cross-check with Ministry of Housing. When we impressed on them that they should have long done the cross checking given the nature and caliber of the detainee and the interest it is generating, they then asked us if we can facilitate their going to the Ministry of Housing which we obliged.
But reading them in between the lines, we deduced that their refusal to release him as granted by the Magistrate court was clearly deliberate, for there is no question about the documents presented with respect to his bail being genuine or not. They are ostensibly delaying his release till 18th of November when the case is expected to come up at the same court in other for them to press more (grievous) charges against him which the Magistrate court as an inferior court will lack jurisdiction to entertain and thus remanding him in prison custody.
The lawyer handling the matter having sensed the permutations of the DSS has proceeded to file a case at the ECOWAS court.
We must report, however, that there has been a high powered meeting going on between the Nigerian authorities and Nnamdi Kanu with iKanu rebuffing all cards placed on the table insisting that any entreaty that is not centered on Biafra restoration is dead on arrival. 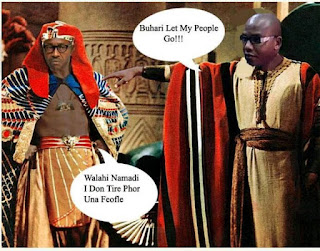 The British government in spite of their make-believe press statement are also concerned about the continued detention of Nnamdi Kanu, who despite having dual citizenship is still their citizen, as the British High Commissioner to Nigeria and his team visited him on Monday, details of their discussion which we are not permitted to report remains reassuring and gladdening. A delegation from the United States government will be meeting with him on Thursday. The pressure from a certain British MP is unsettling the British government and making her act in Nnamdi Kanu’s favour.
When told about the plans by the Governor of Imo state, Chief Rochas Okorocha to convene a meeting of all interest groups over the protest, he got infuriated uncontrollably not minding the presence of the DSS operatives and pronounced death upon any Biafran that attends such meeting. He said that Governor Okoroawusa is a sworn enemy of the Biafran people and that Biafrans should not be equally yoked with him.
He informed that the Nigerian state is panicking, that they had come to him repeatedly, urging him that they will allow him to speak to his group to stop whatever they were doing but he refused not knowing that it was because of the protest. He thus thundered that as the Commander in Chief of the Biafran Armed Forces that the protest should be intensified ten times over. He said he is unshaken and very confident of the leadership he left behind, that they will not disappoint him and the Biafra course. When he was informed about the casualty figure he was sober and pursued for a while, but vowed that for every blood of innocent Biafrans spilled that Nigeria will pay in ten folds. He paid tributes to those killed in Onitsha and Igweocha (Port Harcourt) and urged that those injured should be given all the care necessary. He also called for support for the protesting troops.
Our team left him some hours ago, he was full of life and in high spirit.
Facebook
Twitter
LinkedIn
PrevPreviousEVIDENCES NEEDED BY INTERNATIONAL CRIMINAL COURT CASE AGAINST NIGERIA
NextVolunteer Journalists/Contributors and Editor neededNext