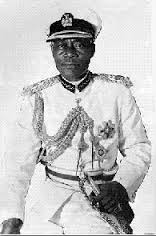 DR.FRANCIS AKANU IBIAM LETTER TO HER MAJESTY QUEEN ELIZABETH.
Your Gracious Majesty,
I am deeply and humbly constrained to present you with this letter. For many years, indeed throughout my mature life, I had been a proud but disinterested admirer of the United Kingdom of Great Britain and Ireland and her peoples. The history of Your Majesty’s country is replete with heroism, discoveries which were near miracles, and institutions of higher learning of the most outstanding character and achievement. Britain, though insular and small in size and capacity, had centuries ago proved conclusively, to the world that for any community and nation to reach the acme of greatness and respectability, it is not quantity that counts but quality and the type of people who make up the nation.
British Christians had the privilege and honour of evangelizing not only a good part of Africa, my own continent, but also a greater part of the rest of the world. Her missionaries, men and women, left home and kindred and comfortable life, to spread Christianity far and wide in areas of the world where, for want of a better description, life was anything but civilized in the Western sense of the word, civilization. They endured lack of scientifically purified water, electric or gas light. They trekked long miles of single-file roads, endured our moist heat and drenching rains, the nuisance of mosquitoes, and sand flies and other indigenous African insects. In the earlier days of missionary venture, they imported tons of tinned foodstuffs and cared nothing for their lives so long as they could preach the Gospel and its Good News, heal the sick, and bring education and enlightenment to the people. The result of this effective humanitarian service, supported financially, morally, and prayerfully by the Churches way back in their homeland, has born exceedingly abundant fruit, and for us in Biafra (formerly Eastern Nigeria), their work has, by grace of God, made our homeland as much a Christian country as any other reputed countries of the world.
Despite annoying treatment meted to me and my fellow African students now and again in certain quarters, I was highly impressed with the religious life of the people of Britain, particularly in Scotland, where I lived and studied in the University of St. Andrews for seven years in one of the coldest parts of the United Kingdom. Altogether, I resided in Britain for ten long years. And having seen their homeland and lived in this Christian atmosphere in which they grew up, the self-denial and self-sacrifice of Christian Missionary came home to me very forcibly, I drew much inspiration from their splendid example, and my understanding and realization of the full meaning and significance of the Christian life dawned on me with great sense of joy and thankfulness.
After taking my medical degrees, therefore, I offered my services to the Foreign Mission Committee (now the Overseas Council) of the Church of Scotland, Edinburgh. I joined the Church of Scotland Medical Service, Calabar Mission, Nigeria, and served the mission and its offspring, the Presbyterian Church of Nigeria, from February 1, 1936 to January 31, 1967. With the consent and approval of the Overseas Council, I was on leave of absence without pay during the last five years, December 1960, to January 1965, of my missionary service, while I was Governor of Eastern Nigeria. As the only Nigerian among a group of some seventy European Missionaries for twenty five years, the going was in the main, stiff and at various times, I felt most frustrated and unhappy. For although Missionaries inspired me without knowing it themselves, I regret to say that, by and large, they did not encourage me. Such a situation did not bother me, however, because I was inwardly happy to serve my people in this unique capacity, and I was not going to quit, come weal, come woe, until, like other missionaries, I had served my turn for thirty years or reached the age of sixty years. If European missionaries, I argued within me, could leave their well-ordered homeland and ease of life, more or less, and where they could make a name for themselves academically or otherwise, and came to my homeland where amenities of life in the European background were hardly existent, I did not see any reason why I, an African, could not follow in their footsteps and serve my own people in my own country under conditions which called for Unclad hardship and demanded much self denial and self sacrifice.
In 1949 New Year Honours Awards, Your Majesty’s revered and late father, His Majesty King George the sixth, graciously conferred on me the honour to be an Officer of the Civil Division of the Most Excellent Order of the British Empire (O.B.E) for services to the Church and State. Again, in the New Year Honours, 1951, he conferred on me the dignity to be a Knight Commander of the Civil Division of the Most Excellent Order of the British Empire (K.B.E) for selfless service to the Church and my country. I happened to be in London at this time as a special guest of the British Council, and when I was invited by a Buckingham Palace Official to present myself before His Majesty to receive the insignia and accolate of Knighthood, I begged permission to have them conferred on me on my return home to Nigeria. I did receive the insignia and certificate at the hands of His Excellency the then Governor of Nigeria, Sir John Macpherson, but I had the unique distinction and singular privilege of receiving the accolade from Your Majesty’s august person during your Majesty’s Royal and memorable visit to Nigeria in February, 1956. 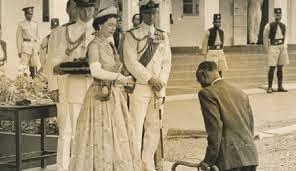