End Killing Our Members In Nigeria, IPOB Alerts Israel And Other World Governments 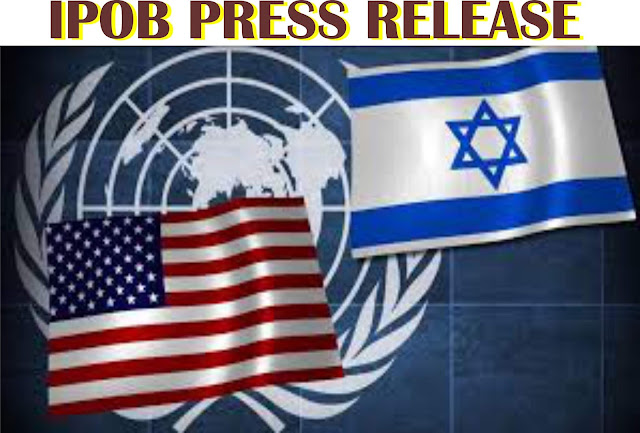 The  Indigenous Peoples of Biafra,  IPOB, has made a passionate appeal to Israel and other world governments to prevail on Nigeria Government to stop killing our members as well as other Biafra agitators who visited Nigeria before Christmas and beyond from different countries. Biafrans abroad are humiliated and hunted down in their respective families and communities especially since Nnamdi Kanu IPOB leader snapped pictures with Israeli national coordinator and other members in Israel, their families are under serious attack by DSS and other security operatives.

IPOB alerted the world governments of the danger faced by Biafra agitators families in Nigeria since the appearance of IPOB leader Nnamdi Kanu in the state of Israel on October 2018.

IPOB leadership said the appeal had become necessary following reports that some of our members seeking refuge in some foreign countries face threat because of their involvement in the struggle for Biafra freedom.

IPOB, the lives of our members here in Biafraland are in danger of summary execution by security operatives in Nigeria.

We certainly discovered that two of our family members who recently arrived from the state of Israel got killed by Nigerian Army and dumped in a boro pit in Aba,  Abia State.

IPOB, therefore, must plead with  Governments of the world especially the Israeli Government and other western countries to give any support necessary to save the lives of IPOB family members who eventually comes to Nigeria.

It is important we remind the whole world that those who are coming back from other parts of the world including Israel are facing serious persecutions here in Nigeria, particularly those who snapped pictures with IPOB leader.
Just last week two young men who came back from Israel were killed and dumped along the road and in bush in Aba Abia state.

IPOB leadership have been informed that even our Coordinator in Israel,  Mr. Ibezim Obiorah Augustine’s family is also facing threat from Nigerian DSS and other security operatives.

We appeal to the Israeli Prime Minister, Benjamin Netanyahu to intervene and save the lives of  Augustine and his family, including other IPOB family members in Israel, Nigeria, Biafra land other countries of the world.