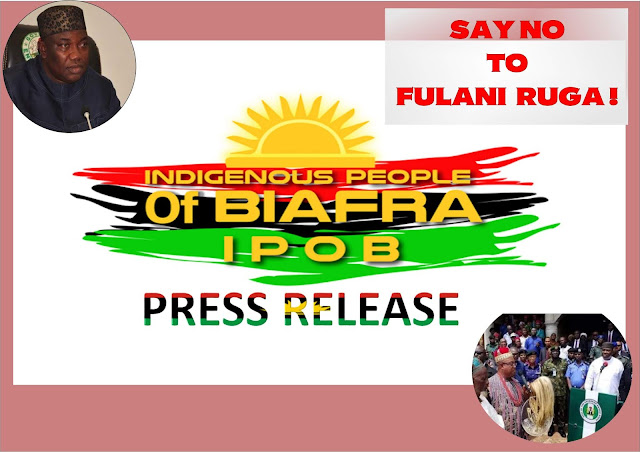 It has come to the knowledge of the great family of the Indigenous People of Biafra (IPOB) that Governor Ifeanyi Ugwuanyi of Enugu State and Okezie Ikpeazu of Abia have both  concluded arrangements to hand over our land in three senatorial zones of Enugu state and Olokoro in Umuahia to Fulani terror herdsmen as part of their  clandestine RUGA implementation program in the East.

We have also discovered that Governor Ugwuanyi along with some traditional rulers and President General of some communities also connived and handed over a land belonging to Newe in Aninri and Nome in Nkanu communities of Enugu States to Fulani terrorists and their cattle. The said land has been in dispute for years between the two communities but now Governor Ifeanyi Ugwuanyi has forcefully taken these ancestral lands and handed them over to the same Fulani terror herdsmen that is responsible for hacking to death dozens of Enugu indigenes in Nimbo and other parts of the state without any reprimand. The message South East  governors are sending out is that Fulani terrorists are welcome to kill Biafrans at will and on top of that they get rewarded with a land for their Fulani settlement.

Instead of apprehending and prosecuting these marauding murderers, Gov. Ugwuanyi have instead empowered them by giving them a RUGA settlement in Enugu State while publicly claiming he has not done so. This level of criminal deception from South East governors have placed the entire Biafra land in danger of a whole-scale Fulani invasion.

We IPOB cannot be dying and placing our lives in danger on a daily basis across Biafra land, fighting well armed Fulani terrorists with our bare hands only to have an Efulefu governor like Ugwuanyi undermine our noble effort. Anybody related to Ifeanyi Ugwuanyi, Okezie Ikpeazu or other Fulani slaves in government houses in the East must warn them to desist from their suicidal undertaking to hand over our land to Fulani Islamic caliphate.

We are equally aware that other state governors and politicians in Biafra land are having series of secret meetings on how to allocate our sacred land of Biafra to Fulani terrorists for their Ruga Settlement on the pretense of a renamed National livestock Program (NLP) initiated by Jubril/Abba Kyari.
We are calling on all relatives, stakeholders, supporters of South East governors and traditional rulers to warn Ifeanyi Ugwuanyi and his collaborators including those in other states  to desist from this evil act of ceeding our ancestral lands to Fulani terrorists for RUGA Settlement or National Livestock Program in any part of Biafra land.

IPOB does not wish to abandon the critical task of confronting Fulani terrorists in our forests and bushes in order to face these wayward governors and their families in our quest to secure our land. We will not spare any person or persons  implicated in the conspiracy to Islamise Biafra land through forced Fulani settlements.

It is important we notify the public that Ifeanyi  Ugwuanyi and his supporters have secretly deployed and detailed a detachment of Fulani controlled Nigerian  Police and Army in the two communities of Aninri and Nkanu as a way of frightening and preventing youths, women and children from protesting against the injustice of RUGA settlements in our land.

Ifeanyi Ugwuanyi must be cautioned and called to order by his family members, friends and associates because if Fulani terrorists acquire or establish RUGA settlement anywhere in Enugu State and its environs, he, Ifeanyi Ugwuanyi will bear whatever  consequences that may result from it.

Our people in Enugu and other parts of Biafra land must remain at full alert and continue to report every suspicious Fulani movement to the nearest IPOB family unit for appropriate action.

IPOB can never and will never allow the establishment or  implementation of RUGA Settlement anywhere on Biafran soil. We shall continue to confront and drive them away wherever they are found even with their police and army support.