IPOB Gives High Sign To South-East Governors, Traditional Rulers Of The Consequences Of Working Against ESN 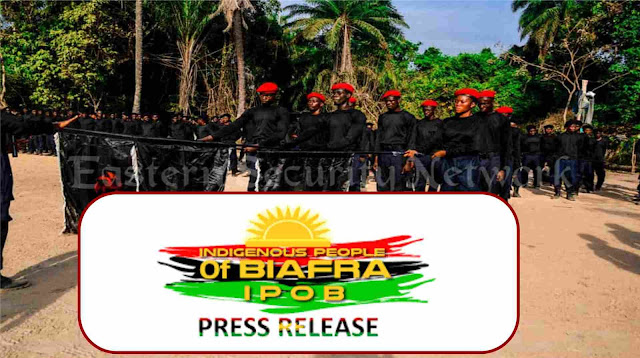 Through Intelligence gathering, it has come to the knowledge of the Indigenous Peoples of Biafra, IPOB, under the command of our Leader, Mazi Nnamdi Kanu, that the treacherous Governors of the Old Eastern Region, are now recruiting traditional rulers, President Generals and politicians to mobilise some local vigilantes to engage Eastern Security Network, ESN in their various localities. The game plan is to orchestrate crisis between the vigilante groups and ESN to pave the way for Nigeria soldiers to attack ESN personnel.

We therefore, wish to warn all local vigilantes in every state of Biafra who have been/may be contacted or are being recruited by the masterminds of this evil agenda through the traditional rulers and President Generals (PGs) of any community or town in Biafraland to attack ESN operatives to have a rethink. Embarking on such unholy mission is suicidal!

Anyone, vigilante group, community, traditional ruler or President General, political elite or anybody under any guise who will connive with the enemy to expose or attack ESN in their locality will live in eternal regret of such satanic mission. It’s not a threat but a promise!

Is it not ridiculous and stupidity that these bunch of idiots who could not mobilise in search of Fulani terrorists maiming and raping women in their communities, destroying their crops and slaughtering them like cows, are now mobilising to go after ESN – a security outfit established to protect Biafrans against the Invaders? Instead of mobilising to stop those on a mission to take over their ancestral lands these fools without any modicum of shame are busy conniving with the enemies of Biafra to sabotage ESN – their only defense line and last hope of survival.

We want to make it clear that leaders of any community in Biafra land where any ESN personnel is attacked will pay dearly for such attack. In the same way, the Governor of any state where the security outfit is attacked shall also be held responsible. Any traditional ruler, PG and vigilante group who collaborates with the Nigeria military to attack ESN operatives should be prepared to bear the bitter consequences of his treachery.

ESN is not a Biafran Army but a mere vigilante group set up to defend the people of the Old Eastern region against terrorists and criminals responsible for the growing insecurity in the region. ESN is not after law-abiding citizens but criminals. Members of the outfit have not molested any law-abiding citizens but have remained in the forests to rid our land of terrorists and ensure our farms are safe again for our people to resume farming activities. They have done nothing to warrant any attack more so when the real terrorists and bandits are still killing and maiming innocent locals daily unchallenged by the highly compromised security agencies.

ESN is a child of necessity which has come to stay. The failure of governors from the South-East and South-South to float a regional security outfit to protect the people against terrorists gave birth to ESN to do what the cowardly governors have failed to do.  It’s the people’s movement and no amount of sabotage can stop it. Anyone standing in its way shall be crushed.

May we also advise the Nigerian Army and other security agencies to stop dissipating energy towards stopping ESN, and rather channel it against Boko Haram, ISWAP, bandits and other terrorists rampaging the North. They should be concerned about rescuing the North from the enclave of terrorists instead of wasting resources to hunt down ESN personnel securing Biafra land against terrorists.

We specifically warn Gov. Dave Umahi of Ebonyi State not to push us any further against the wall. We have tolerated his madness enough. His kinsmen and friends should advise him to stop incurring the wrath of IPOB because he doesn’t have the dancing steps of the music he wants to play. He cannot sacrifice Biafran freedom on the altar of his imaginary Presidential ambition. Umahi must re-trace his steps now and not test our resolve to protect our land.