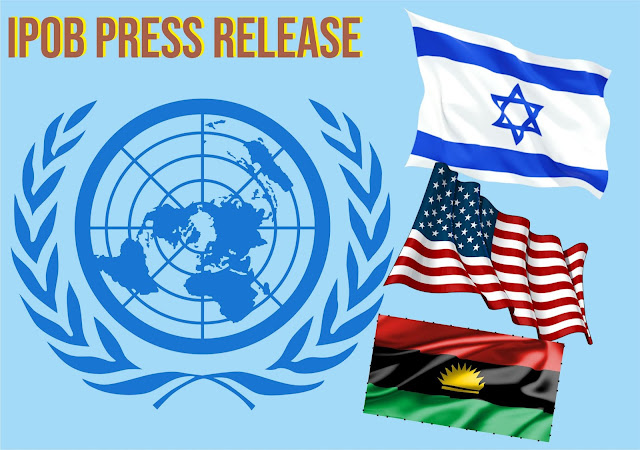 We the Indigenous Peoples of Biafra, IPOB, under the leadership of Mazi Nnamdi Kanu have noticed with interest, the childish attempt by the Federal Government to defend itself against the pure gospel of redemption by our leader using a faceless and non-existent group called Peace Accord Forum.

The Federal Government’s resort to hiring faceless and amorphous groups to defend itself against incontrovertible expositions by our leader, Mazi Nnamdi Kanu, is nothing but an undeniable sign of total defeat. We are now glad to know that the cabal running the crumbling government of Nigeria is more than ever, jittery, and on irreversible panic mode over our leader’s sustained expository messages on Radio Biafra and other media platforms about the fraud going on in Nigeria. The greatest fraud of the century anywhere around the world.

They have confirmed their morbid fear about the imminent collapse of their government of deceit as well as the forced marriage called Nigeria courtesy of our leader’s unveiling of the truth about their fraud, hence their resort to recruiting faceless groups as their attack dogs.

The charade called press release by the so-called Peace Accord Forum via its imaginary National Coordinator, Ambrose Omorodion, published in The Nation Newspapers of May 7, 2020 was a poor script by the DSS.  The purported “body of Northern and Southern organisations” as claimed in the publication is nothing but a creation of the deflated DSS as there is nothing like such group anywhere in Nigeria.

For the discerning minds, why did the report not have a by-line as is the tradition in authentic newspaper reports everywhere in the world if they are real?

As if that was not enough blunder, why is the group losing sleep over the words of a dead man since it claims that our leader Nnamdi Kanu is dead and buried? If Kanu is dead, why bother to respond to him?

We do not need to dissipate energy proving that our Leader is alive, hale and hearty as he comes live on air during his broadcasts every Wednesday and Sunday unlike the impostor acting as the Nigerian President. Mazi Nnamdi Kanu gives real time, and responds to questions during his live broadcasts, an action the hyper-reality mask wearing Buhari doubler cannot attempt. We challenge the man that claims to be the President of Nigeria to hold a live broadcast and take questions from journalists instead of the continued use of photoshopped and pre-recorded videos by the cabal and his media handlers to deceive the gullible populace but certainly not Biafrans because we are smarter. Is it not a big shame for Nigerians, about 200 million of them, that a president they claim they elected democratically cannot address them live and respond to questions by journalists in this coronavirus era when other world leaders do so almost on daily basis?  Is Buhari afraid of the press or the press afraid of him?  Why does he no longer hold media chat? Why has Nigeria suddenly become a country governed by press statements by the ‘Presidency’ instead of a President?

The non-existent PAF in the purported press release, laboured in vain to diffuse the truth unveiled by our Leader concerning the wife of President Muhammadu Buhari, Aisha Buhari. Mazi Nnamdi Kanu said what would have passed as fair comment in saner societies but certainly not in the Fulani -controlled nepotistic and despotic government of Nigeria. We still stand by our Leader that Aisha Buhari, wife of the President without any budgetary provisions should be asked where she got the money she used to procure the 118 trucks of relief materials she donated to Kano State as Covid-19 palliative. Why is it that close to a month since after the death of Abba Kyari the de-facto President cum Chief of Staff to the President, a so-called President Buhari has not appointed his replacement? Today one camp of the cabal will drop a name, the next day another camp will drop a different name? Do they think that Nigerians don’t reason? Well if they don’t, Biafrans do, and that is why our leader is not going to stop exposing them until those in bondage are set free. Mazi Nnamdi Kanu will be live again on Sunday 10 May 2020 at 7pm GMT to continue his heaven ordained gospel of restoration of Biafra and freedom for all Nigerians.

Now Aisha Buhari who had openly complained in a video that Abba Kyari’s daughter locked her out of her room in Aso Rock, who fled Aso Rock for about two months claiming to be on Hajj, has suddenly taken charge of Aso Rock because the obstacle is out of the way.

Our leader is not in any propaganda game but simply unravels the truth to dismantle the cabal in Aso Rock. He backs up every claim with incontrovertible evidence. He only speaks the truth nobody would dare speak, the truth Nigerians are afraid of speaking in order to educate and sensitise the people.

We are grateful to God that more people are now beginning to reason like human beings and asking questions about the deceit surrounding the Nigerian Presidency. The world is now asking: ‘Why is there a hole in Buhari’s neck?  That’s why the cabal is very uncomfortable.

The writer of the PAF crap called press release is an amateur and should be fired immediately by those that recruited him. Instead of puncturing our leader’s points with proofs he decided to chase after the wind. For instance, his shameless and untenable claims that “Kanu is dead and buried”, and that “Kanu is an impostor”, only confirm the fact that he has nothing to say and is bereft of original ideas. It is a childish strategy to deflect attention away from the fraud in Aso Rock has failed.

Our leader has maintained with proof that the Buhari elected in 2015 as Nigerian President was dead and buried in Saudi Arabia. He has also proved with undeniable pictorial and video evidence that the man in Aso Rock is an impostor. So, for saner minds, the so-called press release is only but ‘copycat’; the writer is a lazy student.

Now that the non-existent PAF has volunteered to take on our leader on behalf of the federal government, its imaginary Coordinator should in his next outing address the press live instead of dishing out garbage in the name of press release so his fellow Nigerians can know his real identity.

We are not surprised that the Nigerian government and its latest recruit, PAF, wish death for our leader but Elohim the Almighty God Chukwu Okike Abiama will continue to preserve his life until Biafra is restored and transformed into the centre of excellence that heaven ordained it to be. Having realised their futile attempts to reduce the teeming followership of our leader during this live broadcast on Facebook, they have resorted to cheap, lame and baseless propaganda but they should get prepared to work harder because they will cut to pieces on Sunday. We won’t relent in exposing the truth until this false contraption with faulty foundation finally collapses.