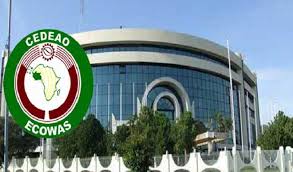 THE FALTERING AND LILLY-LIVERED ECOWAS COMMUNITY COURT OF JUSTICE LACKS JUDICIAL COURAGE
With utter disappointment and feelings of distraught, the Indigenous People of Biafra (IPOB) have determined that the ECOWAS Community Court of Justice (ECCJ) lacks the courage to deliver justice dispassionately. According to information from its website, the ECCJ  “has jurisdiction to determine cases of violation of human rights that occur in any Member State.“ Regarding applicable laws, the ECCJ  noted on its website that it “applies Treaty, Conventions, Protocols, and Regulations adopted by ECOWAS as well as Article 38 of the Statute of International Court of Justice.“ The regional court further stated that “in the area of human rights protection, the ECCJ equally applies international instruments relating to human rights ratified by the State or States party to the case.“ Then why is the ECCJ afraid to give decisive judgment on the case of Nnamdi Kanu versus Federal Government of Nigeria? Why are the Judges postponing the ruling date in perpetuity, if they have nothing to hide?
Recall that on March 2nd, 2016, Mazi Nnamdi Kanu filed a lawsuit at the ECCJ against the Federal Republic of Nigeria on the issue of violations of his fundamental human rights and sought enforcement of same rights as well as compensations from the Federal Republic of Nigeria. At the October sitting of the ECCJ, the case was adjourned to November 8, 2016. When the case came up on November 8, the presiding Judge, Micha Wright, again adjourned it to February 9th, 2017 for Ruling. On the 17th of January 2017 and without waiting for the February 9th, 2017 date to come, the ECCJ again adjourned the date of the Ruling to March 7, 2017, with a caveat that even the March date is subject to further adjournments.
We ask the ECCJ the following questions; why will it take more than one year to hear and deliver judgment on a simple case of violation of fundamental human rights? Why the multiple adjournments at the stage of delivering judgment? How come the cases of Sambo Dasuki and Sheikh Ibrahim Zakzaky which bothered on the same fundamental human rights violation, were started and concluded within six months? Is it because Nnamdi Kanu is a Christian or is it because he is from Biafraland and not from the Northern part of Nigeria?
The ambivalence and the seemingly compromised attitude of the ECCJ is one of the factors propelling Biafrans to seek the restoration of the nation of Biafra. In Biafra, we will show the world that we do not settle for dismal and cowardly performance when it comes to the dispassionate and timely dispensation of justice. Unlike the shenanigans going on both at the ECCJ and in Nigerian courts, the Biafran judicial system will be comparable to what obtains in the Western world.
We assert that the behaviour of the ECCJ on this occasion is encouraging tyranny and abuse of human rights rather than holding the dictatorial and totalitarian government of Muhammadu Buhari to account. The ECCJ is a court of law and, therefore, required by convention and statute to interpret the law. Shying away from delivering a judgment in this case is not only repugnant but is an abdication of responsibility. Regional and national courts in other continents such as North America and Europe are known to be courageous, impartial, and impervious to ethnoreligious influences even when a case is between an individual/group and the State. In such landmark cases, judgments are pronounced without fear or favour. A typical example is the USA versus Schooner Amistad case of 1841 in which a landmark judgment was made in favour of the poor African slaves from Sierra Leone.
Recently, President Ellen Johnson-Sirleaf of Liberia reminded Honourable Justice Jerome Traore and the entire ECCJ of their noble role in the “protection of the human rights of community citizens and promotion of justice“ because according to her “injustice breeds, chaos, destruction, and even death.“ IPOB is appalled that despite these admonitions, the ECCJ has reneged on its roles and responsibilities. We assert that there is absolutely no reason for the ECCJ to dilly-dally in making a Ruling expeditiously in the case of violations of fundamental human rights instituted against Nigeria since March 2016.
The Indigenous People of Biafra (IPOB) wish to express their utter dismay and disappointment with the ECCJ. We believe that the ECCJ lacks the courage and impartial mindset needed to deliver justice promptly in the case instituted by Mazi Nnamdi Kanu, hence the ECCJ resorted to adjournments after adjournments. To this extent, we conclude that the ECCJ has failed to live up to expectations and we do not expect justice from its court given numerous adjournments that have made a mockery of the regional judicial system.
Signed
Barrister Emma Nmezu        Dr. Clifford Chukwuemeka Iroanya
Spokesperson for IPOB          Spokesperson for IPOB 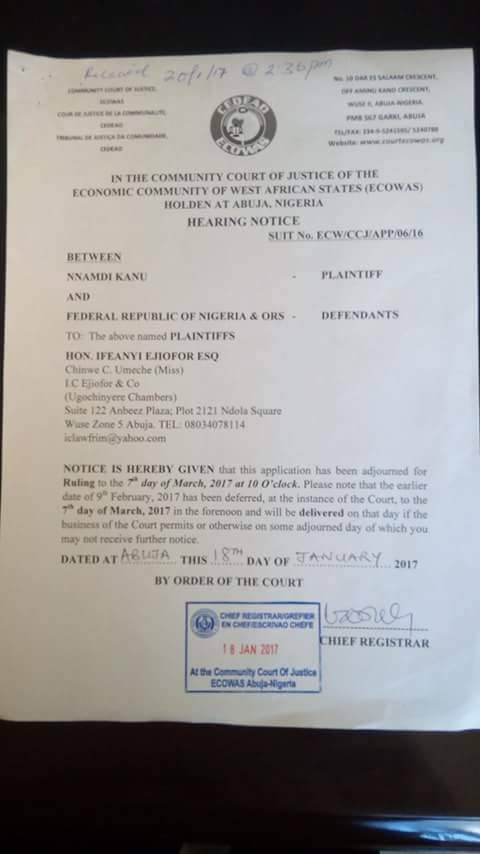