The Indigenous People of Biafra (IPOB) authoritatively assert that the murderous midget-sized governor of Kaduna state, Mr. Nasir Ahmad El-Rufai (born February 16, 1960) has effectively replaced Retired Major General Muhammadu Buhari as the Defacto President and maximum ruler of Nigeria. Midget-Rufai now leads Buhari’s cabal and is confirmed to have put pressure on Justice Binta Murtala-Nyako not to dismiss all the charges against the leader of IPOB, Mazi Nnamdi Kanu and the other three Biafrans. We can assuredly inform the world that this midget-Rufai has instructed Justice Binta Murtala-Nyako to deny Nnamdi Kanu bail on the 20th of March, 2017 and she is bound to obey the midget.

The midget-Rufai’s hatred for Biafrans is innate, genetic, and congenital. The only time that midget-Rufai’s hatred for Biafrans can end is when he is called to the great beyond by Chukwu Okike Abiama (God Almighty). In particular, we recall that this midget-Rufai was responsible for the deaths of Chief Joseph Igwe, the owner of Bolingo Hotels & Towers Abuja and Michael Okpala a.k.a. “Power Mike-Champion of Champions.“ These prominent Biafrans met their untimely death through the nefarious activities of midget-Rufai while he was in charge of affairs at Nigeria’s Federal Capital Territory where he embarked on the systematic dispossession of lands and properties from Biafrans including demolition of existing bonafide structures belonging to Biafrans.

Just like his fellow blood-thirsty Islamic bigot called Muhammadu Buhari, midget-Rufai’s life is riddled with several cases of monumental corruption. Wikileaks reported that midget-Rufai was penniless and homeless as at 1999 before Olusegun Obasanjo brought him into his government and this same midget is now worth over Ninety Billion Naira (N90 billion) with over 40 mansions in assets located in Nigeria and abroad. The midget-sized governor has equally transferred his lavish lifestyle to his son, Bashir El-Rufai who was pictured partying hard with white prostitutes and adorning expensive ring and wristwatch (see pictures). 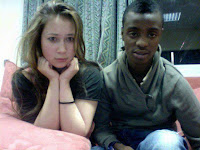 On the 21st of March 2012, Sunday Idowu of Economic and Financial Crimes Commission (EFCC) revealed to an Abuja High Court how midget-Rufai and his two accomplices (Atine Jubrin and Ismail Iro) misappropriated government lands and allocated same to his companies, friends and family members. In particular, midget-Rufai re-allocated lands to three companies where he is a director and these are System Property Development Company, Express Procurement, and Pure Environment Services. Not done with allocating lands to his companies, midget-Rufai revoked plots 1201 and 3352 which were originally allocated to PHCN and NIPOST and then re-allocated them to nine individuals including a serving Senator and one of the daughters of Olusegun Obasanjo.

As the current governor of Kaduna state, midget-Rufai has been cited for his ethnoreligious bigotry, Islamic partisanship, and murderous tendencies. Dr. John Danfulani was quoted by Sabo Douglas Garba of ELOMBA.COM as saying that midget-Rufai “sent armed policemen to shoot poor protesters who were protesting the imposition of one Hajiya Ladi as the sole admin of Chikun Local Government Area.“  Dr. Danfulani further noted that midget-Rufai appointed only four Christians as commissioners out of the state’s 13 commissioners. Midget-Rufai has only three Christian permanent secretaries out of 18 in the state, and there is no Christian among his key officers such as chief of staff, principal private secretary, and secretary to the state government. Most of these appointees are from the Fulani ethnic group. The Fulani ethnic group to which midget-Rufai belongs is a minority group in Kaduna state. This is in line with Buhari’s style of appointing only Islamic Hausa-Fulani Northerners as members of his “kitchen cabinet.“

The killing of hundreds of Shiites in Kaduna under the orders of midget-Rufai is known to all and sundry. Recently, he has been accused of mass murder of Christians in Southern Kaduna which he perpetrated through the hiring of killer squads from the Janjaweed Fulani Herdsmen affiliated to the Miyetti Allah Cattle Breeders Association of Nigeria (MACBAN), an organization which boasts of Muhammadu Buhari as their grand patron. The Janjaweed Fulani Herdsmen group is universally acknowledged as the fourth most deadly terrorist organization in the world. Respected Human Rights organizations such as Intersociety have called for the arrest and trial of midget-Rufai by the International Criminal Court (ICC).

With the blood of Christians and Shiites members in his hands, midget-Rufai is still not satisfied. He has now strayed into the presidency of Nigeria occasioned by the absence of Buhari and he has effectively taken over affairs of the Federal Government to the extent that he now dictates to Justice Binta Murtala-Nyako on Nnamdi Kanu’s case. It is very unfortunate that a midget like Nasir Ahmad El-Rufai, instead of being placed behind bars with all the crimes he committed, is allowed to walk freely and at the same time dictate to Justice Binta Murtala-Nyako on what charges will be dropped or sustained against Nnamdi Kanu as well as insisting that Nnamdi Kanu must not be granted bail. Without any shadow of doubt, it is crystal clear that the midget-sized governor of Kaduna state called Nasir Ahmad El-Rufai has replaced Muhammadu Buhari as the Defacto maximum ruler of the unfortunate British-created country known as Nigeria. This is a more compelling reason why Nigeria must be dismembered so that the constituent nations can go their separate ways and govern themselves properly as they deem fit.

For us Biafrans, there is no going back from the trajectory of the restoration of the nation of Biafra irrespective of the shenanigans of Buhari’s replacement in the person of the midget-sized Nasir Ahmad El-Rufai.