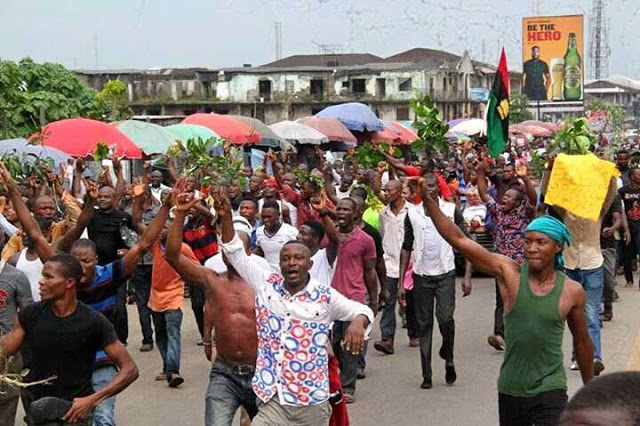 We the global family of the indigenous people of Biafra (IPOB) condemn in it’s entirety the continued and barbaric torture of IPOB family members arrested in Akwa Ibom State yesterday 12th of June, 2019. A combined forces of Police, Army and DSS descended on a peaceful gathering and abducted over 122 innocent and unarmed citizens  including a three year old child that committed no crime. Security agencies through this wholly barbaric and undemocratic act have unwittingly highlighted the fact that Akwa Ibom State is part and parcel of the agitation for Biafra independence. Abducting and illegally detaining people is the greatest recruitment weapon for IPOB. So better know their arrest and brutality will never deter us.

Those that sought to pigeon- hole IPOB agitation as an Igbo affair will now understand very clearly that other ethnic nationalities within enclave of Biafra are yearning for freedom too.

We must warn that Ibiobio Biafrans are under server torture at the hands of northern Fulani soldiers and Police garrisoned in Akwa Ibom and every other part of Biafraland to intimidate and humiliate our people.

The abduction of 140 IPOB members in Enugu State last month and this recent 122 in Akwa Ibom State on 12th of June 2019 is an indication that Nigerian  government headed by Fulani Jihadists, aided and abated by sections of the Yoruba political class are in total dilemma over the tenacity and determination we continue to demonstrate in the face of a brutal crackdown.

We understand the Nigerian government is doing this because of the total compliance seen in Akwa Ibom during the sit at home order issued by IPOB high command to remember and honour our fallen heroes and heroines who sacrificed their early precious lives during the serial killings and genocidal war organised and conducted against the people of Biafra from 1966 to 1970.

Our people were abducted in the state of Akwa Ibom because of the unity flowing in our vain among the people in the whole of Biafraland. It is clearly in the public domain that our leader Mazi Nnamdi Kanu is moving across the globe like a wide fire unifying and bringing Biafrans all over the world together for the total liberation of our homeland. Therefore, this has recently put Fulani government and cabals in Aso Rock into more panic and confusion.

We are aware that our people were arrested to stop them from strategizing to drive home the demand for Biafra referendum in Akwa Ibom which is targeted to become a reality by the last quarter or end of this year.

We are not cowed by the fact that Fulani military in Biafraland summoned the courage to intimidate and humiliate our fathers, mothers, sisters and youths who came out in support of Biafra freedom. It is on record that Fulani military, Police and DSS cannot intimidate or harass, Alamijri, Fulani Herdsmen or Boko Haram terrorists in the whole of the north.

We are reliably informed that Nigeria Government, Hausa Fulani security operatives in Akwa Ibom State especially police commissioner and his killer squad selected over 70 people from among those abducted illegally yesterday in Akwa Ibom State and transferred them to a secret and unknown place for possible execution with the support of APC government in Abuja and members in the State.

It was also gathered that they have perfected plans to start house to house search against anybody suspected to be sympathizer or IPOB member in Akwa Ibom State. Those selected from the arrested members are undergoing serious and severe torture, at the time of the issuing of this statement.

It is pathetic that Nigeria security forces who cannot afford to stop or curtail Fulani Herdsmen and Boko Haram terrorists who are rampaging and killing people in every part of the country are only strong in abducting IPOB members who come out to demand for referendum. It is the responsibility of the governor of Akwa Ibom State Dr. Emmanuel Udom, members of the state House of Assembly and other stakeholders in the State to do the needful by prevailing upon the Fulani police in Akwa Ibom to release those they abducted including a three year old child without further delay.

Facebook
Twitter
LinkedIn
PrevPreviousIPOB Give Special Thanks To Her Family In Canada Over Mazi Nnamdi Kanu’s Warm Welcome
NextBiafrans Across West Coast Of The USA Strongly Behind Mazi Nnamdi Kanu, Support Biafra RestorationNext