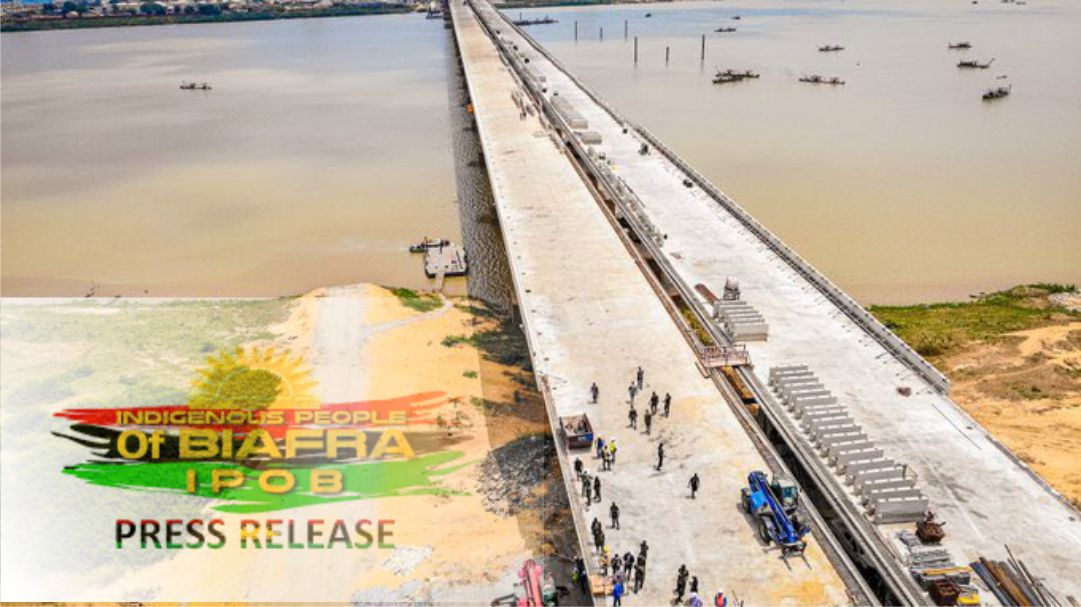 IPOB Press Release
March 30 2022 | IPOB
The attention of the global movement and family of the Indigenous People of Biafra (IPOB) under the command and leadership of our great leader Mazi Nnamdi KANU has been drawn to the laughable plan by the Fulani-controlled Federal Government of Nigeria to name the second Niger Bridge after President Muhammadu Buhari by Fulani controlled Federal Government.
We wish to restate our position on this and reject naming the second Niger bridge after the name of a Fulani man who came to power and completely sidelined our people. Under his watch our youths have been slaughtered by security agents with reckless abandon. Under his watch, terrorists masquerading as Fulani herdsmen have invaded our communities killing innocent men and women after destroying our farms with their cows. These jihadists have raped our mothers and sisters, and spread insecurity across our land. How can a man who supervised all these pains on our people be rewarded with immortalising his name among us?
IPOB is vehemently opposed to naming second Niger Bridge after Buhari. The Bridge should rather be called ACHUZIE BRIDGE or other accomplished Igbo Patriots. No Igbo man has been named after any big project in the North.
Again, we want to debunk the allegation by Fashola that IPOB disturbed the construction of 2nd Niger Bridge. This is another lie from the pit of hell. We want to challenge Fashola to substantiate his claims.  Did IPOB in any way physically interfere with the construction of the bridge by either directly or indirectly hindering any worker either foreign or local handling the project?  Fashola should know that we don’t have his time. He should face his job and not dare us because he is too little to dance our music.
South East has more credible names and more important persons who the federal government can name the second Niger bridge after. We have a galaxy of accomplished Africans like : Chief Chinua Achebe the writer of (THINGS FALL APART), Late Chu Okongwu the renowned economics and a simple man of his time, late Cyprian Ekwensi the author of African Night Entertainment, late Alexander Ekwueme former Vice President of Nigeria, late Chief Michael Okpara former premier of Eastern Region, late Dr. Akanu Ibiam, late Mbonu Ojike, late Chief Kenneth Dike the first Vice Chancellor of  University of Ibadan, Late Professor Eni Njoku the first Vice Chancellor of  University of Lagos, late Dora Akunyili, late Dee Sam. O Mbakwe, late Achuzie, late Phillips Effiong and the living legend Chief Amaechi  Mbazuruike
All these names mentioned above are eminently qualified for second Niger Bridge to be named after them.
Second Niger Bridge was awarded since 1979 by Shehu Shagari regime and since then no administration found it worthy to execute it but IPOB agitation for self-determination pushed this APC administration to reluctantly embark on its construction using the funds past Nigerian politicians looted and starched away in Europe.
We are aware of the condition given by a certain European country that they will only release stolen funds starched away in their country if the funds will be channelled towards the construction of the Second Niger Bridge. This is what compelled the Nigerian government to embark on the Bridge project not out of love for the Igbo people of Biafra. We reject naming the bridge after Buhari when we have other better names.
We equally understand that all these sycophants in Buhari administration derive joy in calling IPOB names to deceive Buhari. We are not perturbed because they would end up in shame.
We want to let them know that IPOB know what is good for our people and we must continue going for what is good for our people.
Fashola and his co-travellers should know that if not IPOB that has ensured security in South-East, the workers of Julius Berger would have run away from the site long time ago. If the second Niger Bridge is being done in the North, Boko Haram, Ansaru, ISWAP and the pampered bandits would have chased them away. That shows them that South East is more peaceful than the North.
The insecurity in the whole of South East is sponsored by Federal government which he Fashola is an integral part of. The Armed Forces know their sponsors and the brain behind the insecurity in the South East region.
COMRADE EMMA POWERFUL MEDIA AND PUBLICITY SECRETARY FOR IPOB.
Published by:
Chibuike Nebeokike
For: IPOB
Facebook
Twitter
LinkedIn
PrevPreviousIPOB Disowns Simon Ekpa And Caution Him To Stop Using ESN, Nnamdi Kanu For Fraud And Crime
NextSenseless Attacks Are Not Part Of Our Mandate: IPOB Denies Hand In The Attacks On Imo Police FormationsNext