IPOB Revokes Ceasefire, Suspends Further Meeting With Ohanaeze, South-East Governors Over Insincerity And Vows On “No Referendum No Election” 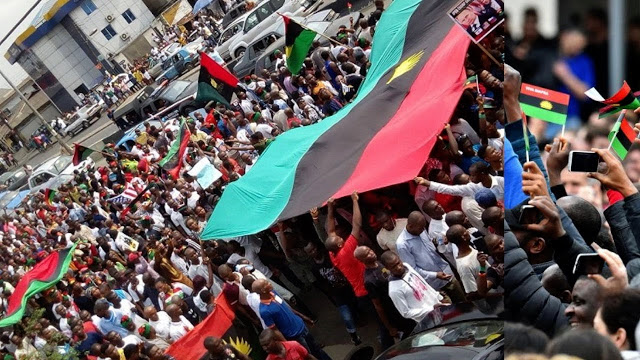 IPOB Press Release
August 10, 2018
Following the inability of Ohaneze Ndigbo and South East governors to de-proscribe the activities of IPOB in line with the stated objectives of the Prof. Ben Nwabueze convened peace initiative, the leadership of IPOB hereby suspend, with immediate effect, any future contact or participation in meetings involving Ohaneze Ndigbo leadership or South East governors. The ceasefire announced as a gesture of goodwill after the first Enugu meeting is now officially revoked with no hope of future reinstatement.
Mindful of posterity and our deep respect for Prof. Nwabueze, who personally pleaded that we suspend all negative comments and verbal attacks against Ohaneze Ndigbo. We duly obliged by announcing a binding cessation of all hostilities against corrupt Igbo leaders despite the fact they knowingly and actively connived with Fulani overlords to kill IPOB activists, invade the home of our leader with the intention to kill him out of petty jealousy over his popularity and acceptance by the people. That our leader and his parents are still missing is a direct consequence of the connivance of Igbo leaders with their Fulani masters to destroy the agitation for Biafra.
IPOB towed this path of peaceful dialogue because of our deep respect for our more honourable and truthful elders whose wise counsel compelled us to give peace a chance. What has transpired over the past two months, culminating in the failed meeting of the 8th of August 2018 in Enugu, have clearly demonstrated the unwillingness of Ohaneze Ndigbo and South East governors to breakaway from their slavish master-servant relationship with the Fulani caliphate. These unrepentant collaborators and instigators of Operation Python Dance abused the privilege IPOB ceasefire afforded them by seeking to turn the meeting into an endorsement of an Igbo candidate for PDP vice presidential slot in the coming 2019 elections.
Under such circumstance, we felt the meeting had lost its purpose hence the need for us to pull out of any talks which consequently brought the entire process to an end.
As a result of these meetings, any lingering doubt that Ohaneze Ndigbo, South East governors and some Abuja based political jobbers instigated Operation Python Dance, has been dispelled by their inability to lift the proscription they themselves imposed on IPOB. Fulani governors of the north never proscribed murderous Boko Haram or Fulani terror herdsmen but Igbo governors and politicians hastily proscribed the only movement, IPOB, fighting for the masses because they want to continue enjoying Abuja patronage. As the masses continue to wallow in abject poverty and oppression, these Igbo sell-out leaders, their families and cronies will continue to live large courtesy of their all powerful Fulani masters who can make or break them.
Having dutifully attended three meetings in the past 7 weeks with nothing to show for it, these collaborators and traitors have become more emboldened in their subterfuge to the extent of boasting to observers sent by Aso Rock to the Enugu meeting of the 8th of August that IPOB has been thoroughly weakened and reduced to begging to be de-proscribed.
Sadly, some of the attendees of the shameful emergency Igbo elders meeting convened to endorse Operation Python Dance at Nike Lake Resort a day after the deadly invasion of Afaraukwu by Nigerian soldiers were also present at the Enugu meeting. In due course, we shall hold them accountable for their actions. They lacked the courage then to issue a statement condemning Operation Python Dance and they still do so till today because they were all in the know or actively involved in the planning of the massacre of their own people because of money.
It has dawned on the worldwide family of IPOB that this well-intended peaceful dialogue, from inception, was a fraud, a charade and political subterfuge designed to get IPOB to participate in 2019 elections and nothing more. Ohaneze Ndigbo and their allies in Abuja saw it as an opportunity to prove to their northern Fulani controllers that they are still in charge of the South East. Nothing could be further from the truth. IPOB is the people and the people is IPOB.
This game plan of seeking to subdue IPOB through a series of endless and meaningless meetings in the name of forging a common front or lasting peace is dead on arrival. IPOB will no longer participate in any meeting or dialogue involving Ohaneze Ndigbo. They mistook our magnanimity for weakness. That, unfortunately, is the greatest mistake they would ever make in their lives.
This bunch will go down as the worst set of leaders in the history of the Igbo race. For 48 years they have been actively involved in trading the future of their children and unborn generations for peanuts. Under their stewardship, nothing worthwhile has been accomplished for the masses since after the war. They are ravenous, predatory and devoid of conscience. We gave them an opportunity to redeem themselves but they failed woefully. This generation of IPOB and history shall judge them very harshly.
Henceforth, anybody seeking to deal with IPOB must contact our world headquarters in Germany where their enquiry will be directed to the appropriate quarters. We would no longer recognise any third party involvement. This will ensure we avoid a repeat of what just transpired with this failed dialogue with Ohaneze Ndigbo.
We wish to thank Prof. Nwabueze immensely for all his efforts and to convey our deep appreciation, regard and respect for him. We also urge him to hold tenaciously to his publicly stated stance that de-proscription of IPOB and the whereabouts of Mazi Nnamdi Kanu is a prerequisite for any peaceful settlement. IPOB hereby reinstate it’s avowed commitment to conduct a referendum as soon as possible.
COMRADE EMMA POWERFUL MEDIA AND PUBLICITY SECRETARY FOR IPOB.
Facebook
Twitter
LinkedIn
PrevPreviousThe Rejoiner; “Blame Game Over Kanu’s Whereabouts” Futile Attempt By State Sponsored Agent Exposed – IPOB Press Release
NextBreaking News: Slain Bodies Of IPOB Members Discovered In Obiawom ForestNext