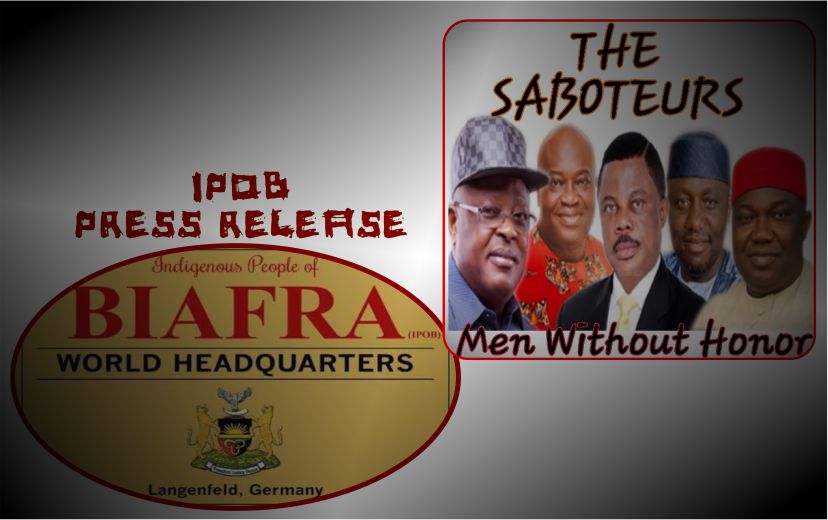 IPOB Press Release
June 22 2021 | IPOB
The attention of the Indigenous People of Biafra (IPOB) ably led by our great leader, Mazi Nnamdi Kanu, has been drawn to the purported disowning and condemnation of IPOB and the Eastern Security Network (ESN), by the frustrated South East Governors and few self-centered political leaders in the region. We are not however, surprised because they were the same people to proscribe us before the federal government tagged us terrorists.
The purported statement by these shameless political generals without foot soldiers has only further exposed them as Caliphate boot-leakers. They know too well that they have since lost grip and control of the masses, hence, their desperation to regain the trust of their paymasters. The only publicly disowned IPOB thinking that doing so will make them regain the trust and favour of the Caliphate.
The governors, Ohanaeze Ndigbo and the handful traitors masquerading as the Igbo political elite should wake up to the realities that they have since lost the confidence of the people. We understand the worry of these Efulefus: They are rattled by the unflinching support and loyalty of the masses to IPOB.
It’s only unfortunate, shameful and disgraceful that the so-called Igbo leaders will be quick to disown and betray their own in their quest to appease their slavemasters. The South East Governors again, in 2017 they sat together in Enugu State to proscribe IPOB and federal government declared them terrorists with the support of South East Governors while they are not. To their shame, how many times have their Northern counterparts disowned the bloody terrorists, bandits and Fulani herdsmen rampaging the country?
So, the South East self-acclaimed Leaders are quick to disown IPOB and ESN, yet they are calling us to accept the calls for peaceful negotiations? What a hypocrisy!
How can South East governors be so desperate for power beyond 2023 that they can sacrifice anything and anybody for personal gains? In case they don’t know, even the Northerners they are trying to impress understand the handwriting on the wall. They know that the governors are on their own. They can’t decide for the over 70 million Biafrans home and abroad.
How can five Efulefus determine the fate of over 70 million people. These South East Vassals should know that during referendum, they only have one vote just like the man on the street.
If these frustrated politicians without conscience and direction are discerning enough, they should know that they should first push for referendum to determine if the people they pretend to be speaking for actually have their support. No matter their pretences, our people are tired of One Nigeria. They have since opted for Biafra, and there is no going back on this irrevocable resolve!
We want to unequivocally declare again, that the five South East governors and the few self-appointed Igbo elite, are too infinitesimal to speak for the millions of Biafrans who are tired of being held hostage in this contraption called Nigeria. They don’t even command the loyalty of all their appointees let alone the egalitarian Igbo nation that never gave them the stolen mandate they parade.
Anybody listening to these traitors does so to his peril. There is no negotiation on the people’s resolve to restore Biafra where human dignity will be respected.
COMRADE EMMA POWERFUL MEDIA AND PUBLICITY SECRETARY FOR IPOB
Published by:
Chibuike Nebeokike
For: IPOB
Facebook
Twitter
LinkedIn
PrevPreviousWe Did Not Kill Any Security Personnel In Imo Or Any Part Of The Country – IPOB Rubbishes Commissioner of Police’s Alleged Claim in Imo State
NextBreaking News! Mazi Nnamdi Kanu IPOB Leader Rearrested – LawyerNext