IPOB TO SOUTHEAST GOVERNORS : YOU PROSCRIBED IPOB TO IMPRESS YOUR NORTHERN MASTERS, NOW THEY HAVE UNLEASHED TERRORISTS AGAINST YOUR VILLAGES 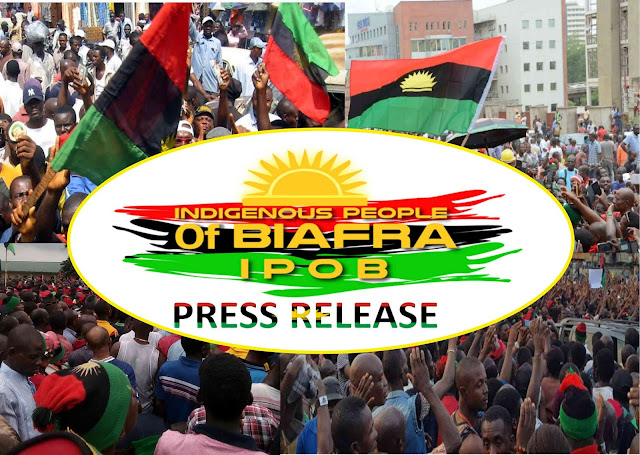 The treacherous and ignoble role of South East Governors, some self-acclaimed Igbo political elite and the Nnia Nwodo -led Ohanaeze Ndigbo in the proscription of the Indigenous Peoples of Biafra, IPOB, and the subsequent invasion of the Afaraukwu Umuahia country home of our Leader, Mazi Nnamdi Kanu, on September 14, 2017 are enough lesson for traitors. It’s a constant reminder of the Igbo adage that “when you kill your hero in internal squabble, during external fight you must remember him “.

Three years down the line, we want to ask these traitors:  How have they and Igbo land fared in the hands of the Fulani? The reward of treachery is shame and eternal regret! By conniving with the enemies to get rid of IPOB that is the only defence line of Biafra nation, these saboteurs have opened our land for constant attack and humiliation by Fulani terrorists, herdsmen and bandits.

First, in their shameful bid to appease and impress their Northern masters for political reward, these traitors outlawed IPOB, a peaceful movement, and paved the way for its eventual proscription as a terrorist organisation. Ever since then, how have they protected or defended Biafra land against incessant Fulani unprovoked attacks? To their shame, Igbo land and the entire Biafra territory have been rendered vulnerable as the enemies on total annihilation and conquest mission have turned it into slaughter ground.

It was their treachery that gave the Nigerian Army the effrontery to raid the home of Nnamdi Kanu on September 14, 2020 under the guise of Operation Python Dance. Their mission was to kill him at all cost but God thwarted their evil plans.

Not done with the recent massacre of 21 unarmed Biafrans at Emene by the wicked Nigeria security agents, the Army, DSS and Police, have now resorted to house to house abduction of IPOB members and other Biafra agitators. The question is: Where are the treacherous Igbo governors, political elite and Ohanaeze that proscribed?

The secret slaughtering of our people in every part of Biafra land since 2015 has continued unabated till date. We are aware of the on-going house -to- house search by security operatives designed to pick up and eliminate Biafrans in Igweocha, Enugu, Imo, Aba, Asaba and Ebonyi States. This is yet another unprovoked attack by Fulani terrorists in Nigeria police and army uniforms since the August 23rd 2020 barbaric killing of Igbo youths in Emene, Enugu State.

Just last week at Ohafia in Abia State, they abducted Mazi Okewu Agwu from his home and many others including Mazi Samuel Arua Eme, Mazi Kalu Iroha Amogu, Mazi David Agwu and 12 others whose names are yet to be established as at the time of this press statement.

Fulani terrorist groups at different locations in Biafraland have been using their kinsmen in Nigeria security formations across the country to unleash different attacks on innocent citizens of Biafra.

This continued state – sponsored attacks and secret murder of IPOB members and Biafrans in general must stop! Let it be on record therefore, that anyone – man or woman, civilian or security agent, etc, directly or remotely involved in killing IPOB member has a debt to pay no matter how long it takes.

We are monitoring and taking records of every single attack on our people and how Nigeria government and her security agencies abduct IPOB members and use chemicals and acid to murder many of our people in their custody to conceal evidence.  We are telling Nigeria government and her security operatives as well as Biafra traitors that IPOB cannot be decimated contrary to their erroneous calculations, and wishful thinking.

In case they have forgotten, IPOB is a global movement divinely ordained to liberate Biafra and other tribes caged in this British   contraption called Nigeria. Our resolve to restore Biafra freedom and independence is of God Almighty (Chukwu Okike Abiama) in Heaven, a task that must be accomplished very soon.

We still call upon US Embassy in Abuja, British High Commission in Abuja, the Canadian Embassy, as well as the Governments of Australia, Israel, France, Germany and Russia to prevail on the Nigerian government and its security operatives to stop their ongoing silent genocide against Biafra agitators. The world should not play blind eye to this atrocity and crime against humanity.

They must also prevail on Nigeria Government to release our people abducted illegally, and also release those dead bodies they took away during the barbaric attack on peaceful and unarmed citizens of Biafra in Emene Enugu State. Nigeria government and her partners in crime must understand that the incessant killings of Biafrans and their murderous tendencies against the peaceful and innocent citizens of Biafra will soon break Nigeria into pieces without remedy.

The latest attempt by the Nigeria government to blackmail IPOB and project it as a terrorist organisation cannot fly. Their ridiculous and shameful claim that a nonviolent and unarmed group is responsible for the purported attack on heavily armed security agents in South East is untenable. How can an unarmed man attack fully armed security personnel? Doesn’t it sound funny?

Ordinarily we wouldn’t have bothered to dignify these detractors with a response as we have since known their stock in trade, but for the sake of the gullible ones and some innocent minds. We want to, once again state here that there is no iota of truth in this fictitious claim.

We equally want to sound a note of warning to everybody especially those who derive joy in castigating IPOB to desist forthwith or brace up for the consequences of their blackmail.

Besides, they should know that the era of propaganda and cheap blackmail is gone. We are ahead of their game.   Frivolous and concocted allegations designed to disparage IPOB can no longer sell. The world now knows better. IPOB’s nonviolent ideology about the Biafra project is well known and cannot change.

It’s an irony that IPOB, outlawed in Nigeria as a ‘terrorist group’, freely operates in over 100 countries of the world. We hold our rallies and activities without molestation or intimidation in these countries because they know we are not terrorists, and don’t intend to be. All we need is Biafra, our own country which has been in existence before Britain created Nigeria and unequally yoked us with Fulani that value cows above human lives. Marriage isn’t by force. We are tired of this bondage and want a referendum to determine our fate. Simple!