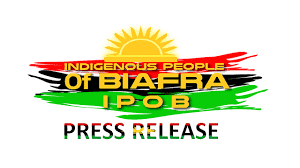 We the Indigenous People of Biafra (IPOB) worldwide have resolved to prove on May 30th both in Biafraland and beyond that, we remain the preeminent freedom fighting outfit anywhere on this earth at this present moment. The High Command of our illustrious movement have directed that every family meeting in every country around the world must in word and deed  demonstrate our formidability and resoluteness before an observant global audience on the 30th of May in such a manner that our heroes, wherever they lie, even in unmarked graves in forgotten battlefields, will be proud of what they achieved 52 years ago. Strict compliance with the sit-at-home order must be strictly and rigorously enforced across Biafraland.

As 30th of May 2019 Remembrance Day draw ever nearer, Biafrans both home and abroad MUST honor and remember our heroes and heroines that died to stop the total Islamisation of the sacred land of Biafra and perpetual enslavement of the children of God. The exceptionally gallant soldiers of the class of 67-70 and the fearless IPOB family members slain during numerous protests and rallies to free Biafra must be honored in time-honored IPOB tradition by observing a solemn sit-at-home and complete lockdown of Biafraland on the 30th of May.

It is, therefore, the patriotic duty of every right-thinking Biafran (man, woman, and child) to respect the sacrifice these brave men and women made for our survival as a race. Every generation of Biafrans must honor our heroes because without them Biafraland would have become another conquered territory like Ilorin, a Yoruba territory that is today 100% Fulani emirate.

All IPOB family units outside Biafraland, in over 88 countries and territories around the world, are expected to partake in street demonstrations, rallies, lectures and prayers to ensure the remembrance of our fallen heroes and heroines on 30th of May 2019 will go down in history as one of the greatest events of our time. IPOB will use this event to conclusively prove to the whole world that we are ready for the upcoming referendum for Biafra sovereignty.

We commend IPOB families in the UK, Europe, Asia, Middle East, USA and many others across the world that have managed to secure marching permits from their relevant authorities because of this historic 30th of May event. The leadership of IPOB are also aware that almost all countries where IPOB has presence, including Angola, Mozambique, Congo DRC, Namibia, Ghana, and Tanzania have respectfully perfected their own arrangements to honor our heroes and heroines on that particular day.

IPOB family members in the UK have secured their venue at Trafalgar Square London for a rally. It is however interesting to note that when the Deputy National Coordinator of IPOB UK contacted the British Metropolitan Police for permission to march on Trafalgar Square on the 30th of May 2019, they were informed by the officer responsible for issuing permits that since 2014 IPOB started its street protests in London, there had never been any breach of public peace compared to similar protests by others groups that have always degenerated into scuffles and altercations with law enforcement agencies in the London area.

Britain having recognised the very civil approach of IPOB, granted permission to the UK IPOB family to proceed with the rally without undergoing the tedious application process for a permit which groups are normally subjected to. No other liberation movement in the world can boast of the pedigree, presence or respect IPOB enjoys across civilized nations of the world.

There will be a complete lockdown of Biafraland and major cities where Biafrans have a significant population concentration like Sabon Gari in Kano, Lagos, Kaduna, Zaria, and Abuja.

We would like to remind certain criminally minded individuals, DSS informants, traitors, and Biafra-for-hire groups that hiding under the banner of Biafra agitation to serve Miyetti Allah agenda through Al Mustapha will only bring them shame and ridicule. As with tradition, Biafraland will be locked down on the 30th of May. These shadowy elements that only exist on the pages of newspapers- without any significant presence on the ground in Biafraland or anywhere else around the world, should retrace their steps before they are all consumed in the upcoming inferno of rage against traitors. Any attempt to discourage our people from honoring their heroes or bring ridicule to the memory of our own Biafran activists that died in the course of Biafra restoration will be calamitous for the said traitor or his group.

These shadowy groups must know that collecting money from their Fulani sponsors in order to disrespect our heroes that fought and died for us is not something we will tolerate. These charlatans without shame or honor have forgotten that some of their members died at the hands of the same people they have gone to collect money from to stop a remembrance that includes honoring those members of theirs that died in service to Biafra. This is the height of evil and betrayal of the very worst kind.

To shamefully make such open and unguarded statements concerning the remembrance day celebration of our fallen heroes and heroines who died that we may live is indicative of the hopelessness and criminal mindset of these Nigeria sponsored criminals masquerading as Biafrans. Only informants, traitors and saboteurs will dream stepping outside on the 30th of May and if they do, they will only have themselves to blame.