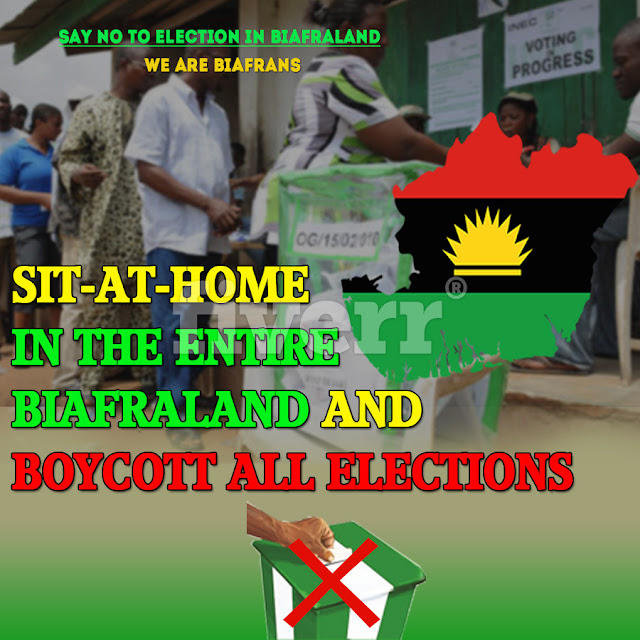 IPOB DIRECTORATE OF STATES
PRESS STATEMENT
The Directorate of State of the Indigenous People of Biafra (IPOB) under the leadership of Onyendu Mazi Nnamdi Kanu do hereby express its profound gratitude to the entire family of IPOB worldwide and to Biafrans in Biafraland and in Anambra State in particular for the discipline which we all exhibited on the 18th of November 2017 through our adherence to the command of our leader Onyendu Mazi Nnamdi Kanu by boycotting the just concluded fraud of an election in Anambra state. Words are not enough to thank all of you for your trust and confidence in the leadership of the Indigenous People of Biafra which has not and will never betray that trust reposed the leadership. 18th of November 2017 was indeed a pivotal day in the life of Biafrans since the last 104yrs.
It is without a doubt that Biafrans in Anambra spoke loudly and unequivocally that we as Indigenous People of Biafra under the leadership of Onyendu Mazi Nnamdi Kanu have no more potion in the contraption called the zoological republic of Nigeria. With that singular act of 18th November 2017, we have said to your tents to all the Nations that were forcibly compelled into the fraud of a country where truth is anathema and falsehood is celebrated.
Even with pictorial evidence of empty polling units and despite the true facts recorded by international observers, the Nigerian corrupt agency called INEC whose only term of reference is to ensure that elections are manipulated as best as possible shamelessly announced a winner in an election for which more than 2,600000 (two million six hundred thousand) people were registered to vote but saw less than 10000 (yes ten thousand) votes casted of which majority of these 10,000 are the relatives and hangers on of the candidates with the rest being those that mortgaged the future of their children for a pot of porridge. These individuals who collected gratification from corrupt politicians who have blood of the innocent on their hands have indeed brought a cause upon themselves, their family and children.
Despite the antics of our internal detractors and in spite of the huge war chest at the disposal of our enemies, the Indigenous People of Biafra (IPOB) under the leadership of Onyendu Mazi Nnamdi Kanu achieved more than 95% boycott of the Anambra state November 18th election.
The false and fake result announced by INEC and being peddled by the compromised Nigerian gutter media is true to form because the Nigeria establishment do not want to accept the resounding defeat handed down to them by the Indigenous People of Biafra as a result of the boycott of the election but we shall expose them It may surprise the reader to know that as it stands today the whole Nigeria media establishment cannot boast of one (1) honest and truthful reporter or journalist in the mold of Dele Giwa of the blessed memory who stood on a very high moral pedestal and spoke truth to power. I challenge Nigerian media practitioners to prove me wrong if there is still any conscientious practitioner amongst them whose hands have not been tied with brown envelopes and other forms of consideration.
We are aware that the Nigerian government in a meeting it held with party chieftains and their candidates in the Anambra election has decided to offset the cost of their electioneering expenses in exchange of accepting the result announced by INEC. But the truth cannot be hidden for too long as there are already dissenting voices from the ranks of the political party as epitomized by the rejection of the INEC announced result by the candidate for the PDP. Biafrans should be rest assured that we the Indigenous People of Biafra shall expose the fraudulent INEC result for what it is and the Nigerian establishment and media of liars for what they are.
We have taken our time to come out with this Press Statement in order to ensure that we have the facts on our side. The indisputable result flowing from the successful boycott of the November 18 Anambra election by the Indigenous People of Biafra is that the occupant of the office of governor of Anambra State based on the fraudulent and falsified result announced by INEC has no legitimacy to govern our people in Anambra state and the international community must take note of this fact.
It therefore follows that taking cognizance of the overwhelming and unassailable boycott of the election we urge the international community through the United Nations to as a matter of urgency set a date for a referendum in Biafraland so that the more than 95% of Biafrans in Anambra state who have unequivocally expressed their repugnance to the Nigerian commercial enterprise together with the rest of Biafrans both in Biafraland and in the Diaspora are afforded the right and opportunity to determine their future, that of their children and generations unborn.
The Directorate of State of the Indigenous People of Biafra (IPOB) under the leadership of Onyendu Mazi Nnamdi Kanu once more salute the commitment and resolve of our people in Omanbala and the whole of Biafraland to bring to a speedy end the servile and oppressive condition into which we have been compelled to live under for a very long time. Because CHUKWUOKIKE ABIAMA is our help and at the helm of this struggle, we are assured of victory in the end to the glory of HIS name.
Signed
Mazi Chika Edoziem
Head of Directorate of State of
THE  INDIGENOUS PEOPLE OF BIAFRA
Facebook
Twitter
LinkedIn
PrevPreviousBiafra: Press Release!!! Anambra have spoken loud and clear that they want Biafra
NextChief Nwodo have confirmed that he was one of those that sanctioned the use of lethal force against unarmed, peaceful IPOB family membersNext