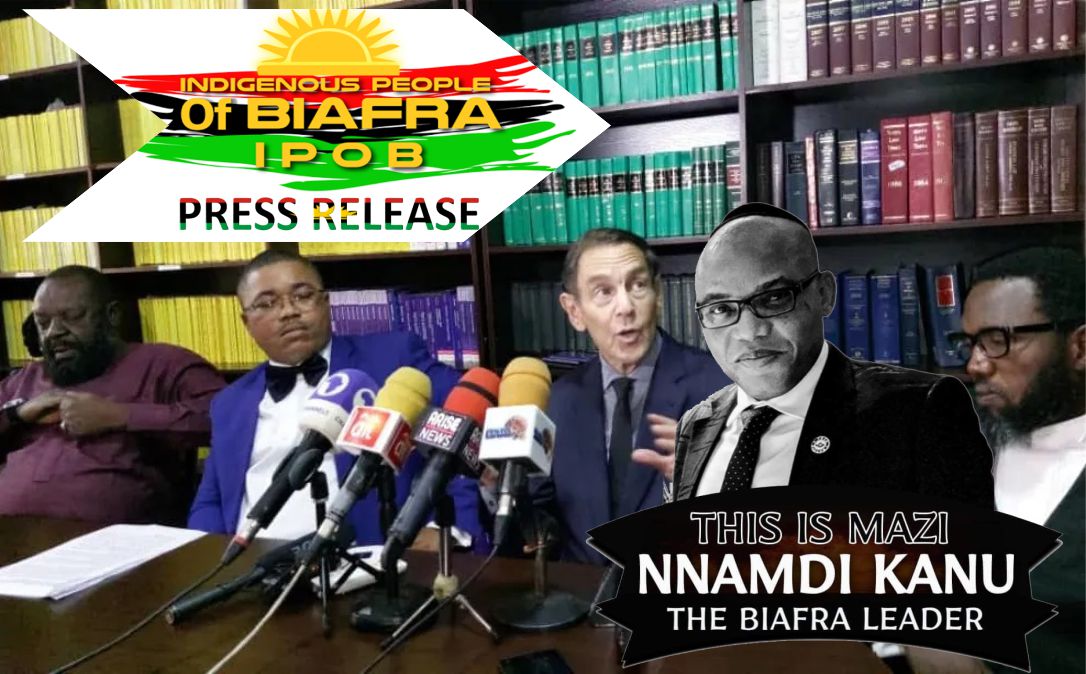 IPOB Press Release
March 04 2022 | IPOB
Following the recent publication by Sahara Reporters, purporting a demand letter by Mr. Bruce Fein, we the global movement and family of the Indigenous People of Biafra (IPOB) under the command and leadership of our great leader Mazi Nnamdi KANU wish to categorically make it known to the public that Mr. Fein has no authority whatever to decide or make pronouncement on the choice/status of neither the legal team of our Leader, Mazi Nnamdi Kanu nor of the IPOB Lead Counsel.
Mr. Bruce Fein should recall that he was in the first place appointed Mazi Nnamdi Kanu’s International Spokesperson/Legal Representative by this trail blazing IPOB Lead Counsel – Sir Ifeanyi Ejiofor, Esq whom he today, is trying to castigate and defame because of little token of fifty thousand dollars offered to him every trip he made to Nigeria by these infamous Umuada highway in USA and the man in Finland claiming to be unfortunate disciple.
We are baffled that Mr Bruce Fein could belittle himself and reducing himself to allowing them to deceive him by talking like a demented fellow. How could a well intelligent and professional lawyer would be using this kind of words to his fellow lawyer in the world.
The women in America sent Bruce Fein to Abuja to persuade our leader Mazi Nnamdi KANU to order him and women to inaugurate government in exile which when this aberration failed to materialise as it is unconscionable to be contemplating forming a Biafran government in exile when our leader is in the hand of our enemies. After this unsuccessful move to set up a government in exile, the grudges against Sir Barrister Ifeanyi Ejiofor began to take form.
These traitors in America and infiltrator in Finland thought that our Legal Representatives were the ones who stopped their gimmicks and antics, without knowing that IPOB have surpassed government in exile.
The powers conferred on Mr. Bruce Fein by our Leader via the IPOB Lead Counsel is to be exclusively exercised in the United States of America and other foreign jurisdiction, with the exclusion of Nigeria.
Pertinent to note is the fact that Mr. Bruce Fein set his feet in Nigeria shortly after the abduction and extraordinary rendition of our Leader via the invitation letter extended to him by our Lead Counsel – Sir Ifeanyi Ejiofor, which visa issued in respect thereof still subsist till date.
Several attempt to visit our leader either in Court or the DSS facility by Mr. Bruce Fein were all rebuffed by both the DSS and the Court respectively. All formal correspondences towards making those visits feasible were exclusively handled by the IPOB Lead Counsel.
We however, observed that Mr. Bruce Fein started avoiding our Lead Counsel after our Lead Counsel declined to cooperate with him in getting our Leader to sign a totally strange document that could have negatively impacted on the status quo.
From that moment, Mr. Bruce Fein pitched tent with sworn enemies and detractors of our struggle. No wonder he is today, ranting from a foreign land.
The general public is hereby, respectfully urged to disregard Mr. Bruce Fein’s claims as they are baseless because he is being induced into ranting these infamous statements. We reiterate that the IPOB leadership have implicit and unshaken confidence in our erudite teams of lawyers, who have creditably distinguished themselves as a sound and indefatigable advocate.
Mr. Bruce Fein is advised to focus on the international briefs provided to him to handle on behalf of our Leader, which we have not seen any tangible results since he started handling them in the USA and desist forthwith from further defaming our amiable Legal Luminary. IPOB appreciate and love his commitment and focus in handling our leader’s and our case.
The IPOB Lead Counsel has since taken to court, the authors of the libellous publication, upon whose original defamatory publication Mr. Bruce Fein relied on.
We therefore, appeal for calm while the court decides. Let good conscience and wise counsel prevail.
Barrister Ifeanyi Ejiofor led team of lawyers worked relentlessly for the release of our leader Mazi Nnamdi KANU in 2017 until he was granted bail. So, Bruce Fein should ask questions if he don’t know about that.
COMRADE EMMA POWERFUL MEDIA AND PUBLICITY SECRETARY FOR IPOB.
Published by:
Chibuike Nebeokike
For: IPOB
Facebook
Twitter
LinkedIn
PrevPreviousReal Reasons Behind Buhari’s Kenya, London Trip Exposed By IPOB
NextInternational Violation As IPOB Exposed FG Plot To Abduct Its Top Diaspora Based OfficialsNext