Nigerian Army panel exonerates self of allegations of IPOB Killings 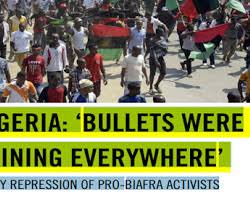 By Paul Obi in Abuja
The United States and British embassies in Nigeria has withdrawn and denied entry visa to some serving and retired Nigerian Army (NA) officers, a report of a Board of Inquiry set up by the army to investigate allegations of human rights abuses by the military in the country, has revealed.
This is even as the Nigerian Army exonerated itself over allegations in its confrontations and treatment of Boko Haram terrorists and internally displayed persons (IDPs) in its operations in the North-east, as well as members and sypathisers of the Indigenous People of Biafra (IPOB).
The report was presented late wednesday by the Head of the Nigerian Army Civil Relations, Maj-Gen. Nuhu Angbazo, alongside the Director of Army Public Relations, Brig.-Gen. Sani Usman.
The army had set up the Board of Inquiry to investigate the allegations contained in a series of Amnesty International reports accusing military officer of human rights abuses and extrajudicial killings during their engagements with Boko Haram and IDPs in the North-east, and member of IPOB in the South-east.
Curiously, the board members that carried out the investigation into the rights abuses were all absent at the presentation of the report by officials of army headquarters in Abuja.
Angbazo, while presenting the report, said: “You will recall that Amnesty International (AI), in their reports about the NA in the North-east, had alleged cases of arbitrary arrests, unlawful detention, torture, forced disappearance and extrajudicial executions against some senior army officers.

Likewise it alleged same case against the NA regarding IPOB.

“The Board limited its investigation to the roles played by the NA during the rallies by IPOB in Aba on 9 Feb, 2016 and Onitsha on 29-30 May 2016.
“The AI alleged that on 9 Feb 2016, during a peaceful rally by IPOB at the National High School in Aba, Abia State about 17 of its members were killed and 30 injured by personnel of the NA.
“AI also alleged that it had evidence of mass extrajudicial executions by security forces, including at least 60 people shot dead in the space of 29-30 May 2016 in connection with events to mark Biafra Remembrance Day.
“The Board reviewed videos, photographs and eyewitness testimonies relating to demonstations and other gatherings of IPOB members provided by non-government and military sources.
The Board also had extensive discussions with the governors and senior government officials of Abia and Anambra States.

“The Board visited the National High School, Abia where it was alleged that members of the IPOB were shot by security forces on 9 Feb 2016.

“The Board met with the schools security man on duty on the said day (name withheld).
“The Board took note of the AI allegation that the bodies of at least 13 members of the IPOB allegedly killed at the National High School, Aba were buried in a shallow pit along the Aba-PortHarcourt expressway.
“The Board observed that there was no specific description of the location of the alleged shallow pit in the AI report.”
On the incident on May 30 2016, Angbazo stated that with regards to that incident at St. Edmund’s Catholic Church Nkpor, where AI had alleged that soldiers opened fire on worshippers in the church compound, members of the board had held individual and group discussions with the resident priest (name withheld) of the church, the chief security officer of the church and residents within the vicinity.
“The Board found that there were protests by IPOB members at Aba on 6 Feb 16 and at Onitsha on 30 May 16.
“The Board found that the IPOB protests were not peaceful and that the lives and properties of citizens in the protest areas were threatened.
“In the words of one of the governors that met with the Board ‘the IPOB may have set out to have a peaceful protest, however, criminals infiltrated their ranks and turned these protests into violent ones’.
“In particular, the board found that IPOB members converged at Onitsha on 29 May 2016 to mark the anniversary of the declaration of the Sovereign State of Biafra.
“The Board also found that the IPOB members occupied the Niger bridgehead, stopping free flow of traffic and threatened to blow it up.
“That it was the inability of the Nigeria Police to enforce law and order that led to the deployment of the military.

“The Board found that there was a joint operation of the police and the NA to contain the protesters on all the days when there were protests.
“The Board notes the statement of governors and senior officials interviews revealed that there were no reports of any killings by the military on any of the days of the protests and they had no information of 13 persons allegedly buried in a shallow grave along the Aba-Port Harcourt expressway.
“The Board notes that the statement of the gateman at the National High School, Aba, who testified that he heard gunshots and stated that he saw one person fall to the ground. He could not recollect what happened to that person,” Angbazo said.
He stressed that the board also interacted with the Anambra State governor, state Commissioner of Police, State Director of DSS and some residents.
“They testified that no one was killed during the incident at Onitsha bridgehead. However, the police report showed that 14 people were arrested on the day,” he said.
On North-East, Angbazo quoted copiously from the report of Amnesty International, stating: “The Board observed that in all AI reports on the human rights situation in Nigeria, specifically as it concerns military operations in the North-east, allegations of human rights violations were made against units, formations and personnel of the NA in general.
“However, in its report, reference above, specific mention was made against certain senior officers who Amnesty International believed should be investigated for the war crimes of murder, enforced disappearance and torture.
‘During this period, AI documented arbitrary arrests and unlawful detention of thousands of people in inhumane conditions, the deaths in custody of large numbers of detainees, and extrajudicial executions by top the command. Maj.-Gen. Ahmadu Mohammed was the Commander 7 Div from 24 Feb till 16 May (year not given).

“During this period, AI documented arbitrary arrests and unlawful detention of thousands of people in inhumane conditions, the deaths in custody of large numbers of detainees, and extrajudicial executions under his command.

“He was in charge of military operations when the military executed more than 640 detainees who escaped from Giwa barracks after a Boko Haram attack.
“Maj.-Gen. Austin O. Edokpayi was Commander of the MNJTF based in Baga from at least Apr 13 until Dec 13 (year not given), where Nigerian soldiers were responsible for arbitrary arrests and unlawful detention, the extrajudicial executions of more than 185 people on Apr 13, and death in custody at the Baga detention facility.
“Brig.-Gen. RO Bamigboye (rtd) was commander of the 21 Armoured Brigade (stationed in Giwa Barracks) from Feb 12 till Sep 13 (year not given). He was in charge of the barracks during the period when at least 5,000 detainees died in custody, and when torture and ill-treatment where used routinely.
“AI further alleged that a number of high-level military commanders should be investigated for their potential command responsibility for crimes committed by their subordinates, on the basis that they knew or should have known about the commission of the crimes and failed to take adequate action to prevent the commission of war crimes to stop the commission of war crimes, and to take all steps necessary to ensure the alleged perpetrators were brought to justice in fair trials.
“These officers are: Lt.-Gen. Azubuike Ihejirika, former COAS (Chief of Army Staff), Admiral Ola Sa’ad Ibrahim, former CDS (Chief of Defence Staff), Air Chief Marsahl Alex Badeh, former CDS, Lt.-Gen. KTJ Minimah, COAS.”
Angbazo further revealed that the board noted despite the fact that there was no finding of human rights abuses against any serving or retired military officers by any court of law or military Board of Inquiry, at least two diplomatic missions either revoked or denied their country entry visas to a number of senior officers who held command responsibilities during the military operations in the North-east.
The committee also exonerated the army of any alleged sexual abuse of IDPs in the North-east, he added.
Angbazo also revealed that these allegations led to the withdrawal and denial of U.S. and UK visas to some serving and retired senior officers.
“There were cases of officers whose names did not appear in the allegation but were also denied visas.
“AHQ (army headquarters) subsequently conducted an investigation and disseminated the reports to all relevant authorities, including the U.S. authorities through the DA (defence attaché) Washington.
“The U.S. however conveyed its dissatisfaction with the report and requested that a more comprehensive inquiry be conducted.
“Thus a Special BOI (Board of Inquiry) was constituted to investigate the allegations,” Angbazo disclosed.
The panel had Maj.-Gen. AT Jibrin (rtd.) as president. Other members included Mr. Olawale Fapohunda, Col. PC Izukanne (rtd.), Mr. Tony Ojukwu, Brig.-Gen. A Dadan-Garba (rtd.), Brig.-Gen. OL Olayinka, Col. LB Mohammed, Col. UM Wambai and Lt.-Col. CM Akaliro as secretary.
Source
Facebook
Twitter
LinkedIn
PrevPreviousIPOB Press Release on Quit Notice !!!we sincerely thank the Arewa Elders Forum, Arewa Youths and Arewa Consultative Forum for seeing sense in what IPOB has been saying
NextBiafra: Gov. Obiano testified to Hausa Fulani Islamic Nigerian Army panel that no IPOB member was killed last year at NkporNext