Nnamdi Kanu: Okezie Ikpeazu is a coward, criminal and congenital liar, complicit to the plot to assassinate Kanu – IPOB 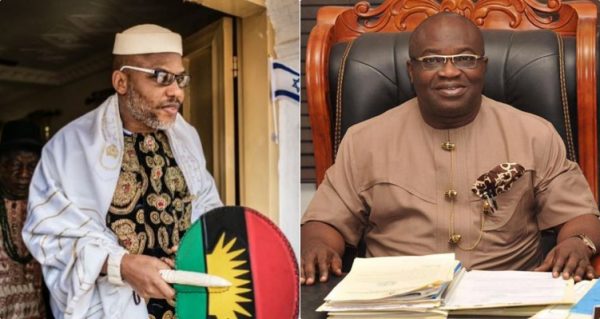 We the Indigenous People of Biafra (IPOB) find it beneath contempt that a failed governor and a stooge of the northern cabal in the person of Gov. Okezie Ikpeazu will callously seek to endear himself to the traumatised Afaraukwu community by mouthing what amounts to gibberish before a rented crowd of hungry individuals as part of his efforts to get re-elected in 2019. Not only is Okezie Ikpeazu a congenital liar and coward, he is criminal in receipt of stolen goods from the palace of Eze Israel Okwu Kanu. IPOB Intelligence Unit is in receipt of incontrovertible photo and video evidence of Ikpeazu receiving items stolen from Eze Kanu’s Palace by the Nigerian military. We are waiting for commencement of election campaigns to release them for maximum impact.
Okezie Ikpeazu, Dave Umahi, Willie Obiano, Nnia Nwodo and others are the prime instigators of Operation Python Dance which they have never denied. They know where the military kept Eze Israel Kanu and Ugoeze Sally Kanu, to pretend otherwise is an exercise in futility. At the appropriate time all those responsible for the military invasion of Afaraukwu and the loss of 28 IPOB family members will be held to account. It is not a question of if but when. Feigning ignorance or knowledge of the invasion of the 14 September 2017 shows what a dubious criminal Okezie Ikpeazu is.
South East Governors Forum in collaboration with Ohaneze Ndigbo and a few others based in Lagos/Abuja, worked hand-in-hand with Fulani caliphate to plot the assassination of Nnamdi Kanu and his parents. This is a fact! Okezie Ikpeazu thinks that a few weasel words and paltry 2 Million Naira shared amongst impoverished hungry people presented to him at the Banquel Hall of Abia State government house, will eradicate the sacrilegious invasion of the home of an Igbo traditional ruler.
Teachers and other civil servants in Abia State are owed upwards of two years salary with no hope in sight of when they are likely to get paid but Okezie Ikpeazu is busy distributing money in the hope of buying the conscience of the people. Such gimmick may have worked in the past but not in this era of IPOB. Okezie Ikpeazu is a one term governor because he is a traitor to the people of Biafra in general and Abia in particular.
No amount of stomach infrastructure initiative, like this one organised for him by a certain Udochukwu Ogbonna an indigene or Isiama Afaraukwu, who is unsurprisingly an Abia civil servant- hopefully seeking to secure his unpaid salary, will save him. INEC’s world famous rigging antics will not save him either because IPOB High Command has determined that all those that had in a hand in bringing Operation Python Dance to Biafraland will pay a heavy price for their betrayal. Any person, persons or political party investing in Okezie Ikpeazu to be re-elected governor of Abia State is not only mistaken and wasting their resources but naive to the point of stupidity.
Okezie Ikpeazu cannot superintend the mass killings of Biafrans in Abia State and expect to be returned to power. Have we forgotten Amnesty International report on the massacre of civilians at National High School Aba? It was the same Okezie Ikpeazu that oversaw the cold blooded execution of those asking for their  freeeom. The household of Okezie Ikpeazu and their generations unborn will be held accountable in life and death for the atrocities Okezie Ikpeazu used Fulani soldiers to commit in our land. It will be a monumental insult and a desecration of the memory of the dear departed for Okezie Ikpeazu to return as Abia State governor in 2019, his hands are soiled with the blood of the innocent. The same fate applies to all those implicated in Operation Python Dance. Current Igbo governors are unrepentant Fulani slaves and their continued stay in power will represent a formidable obstacle on our road to freedom. They cannot return in 2019 no matter what Fulani controlled INEC does.
If Fulani soldiers under the cover of Nigerian Army can invade Biafraland, kill, torture and detain innocent people including our mothers with such impunity, then the title of Chief Security Officer of the State is lost on these quislings occupying government houses in the east. The likes of Okezie Ikpeazu and Dave Umahi exist to please the northern caliphate even it means poisoning all Igbos to death in the process. All they care about is exalted political office and unfettered access to money allocated to their state. Their time has come to an end. 14 September 2017 was the day Okezie Ikpeazu murdered sleep. Those offering what amounts to mere sycophantic value to his campaign for re-election are doing so at their own risk. IPOB and Kanu family cannot be bought with money or material, Biafra freedom is the ultimate.

Facebook
Twitter
LinkedIn
PrevPreviousAtiku Abubakar Presidential Race And The Nonsense Of Igbo Politicians
NextIPOB Reassures All Biafrans, Says Leader, Mazi Nnamdi Kanu Is Out And Determined To Set Them FreeNext