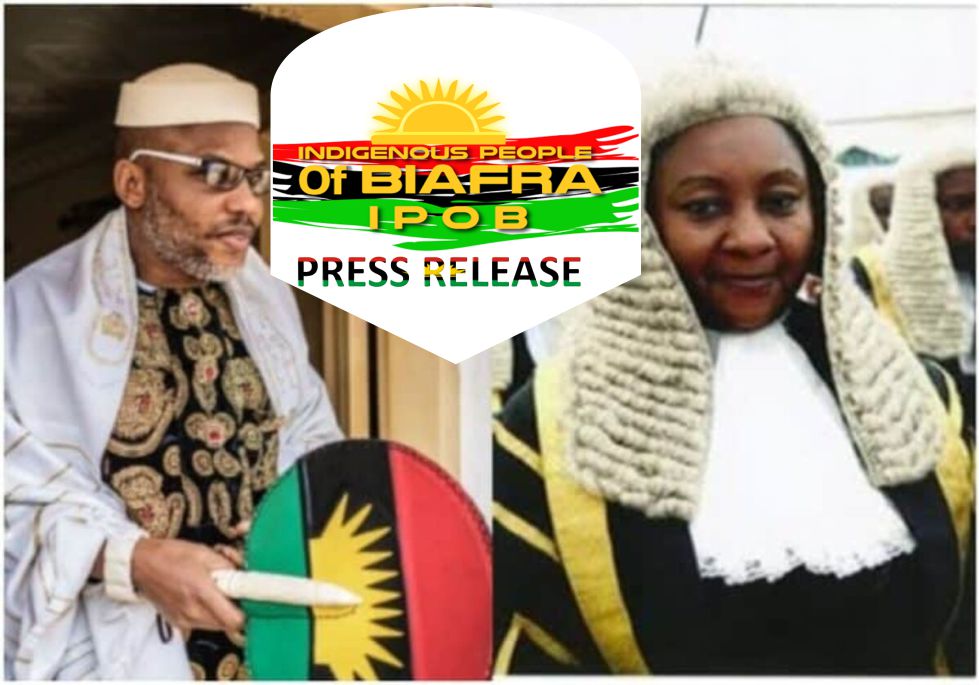 IPOB Press Release
March 09 2022 | IPOB
The global movement and family of the Indigenous People of Biafra (IPOB) ably led by our great leader Mazi Nnamdi KANU wish to state unequivocally that the introduction   of empty charges are simple delay tactics by the Nigerian govt to drag on the issue of releasing our liberator and prophet Mazi Nnamdi KANU unconditionally from the DSS custody.
The Federal Government of Nigeria in their desperation to manufacture offences that may provide suitable grounds to proffering charges where no offence known to law existed, severally carried out 6 successive amendments to the frivolous charges filed against Mazi Nnamdi KANU.
If we may ask, what happened to the Charge of treasonable felony earlier proffered against Mazi Nnamdi KANU? This they have now amended it to the present new 15 count charges which still hold no water. If Nigeria government and its AGF knows what they are doing they should save themselves from the disgrace that is about to befall them because Nnamdi KANU committed no offence known to the laws of Nigeria and the world for that matter.
It is to be pointed out that as far as the manner in which Mazi Nnamdi Kanu was brought into the country is concerned, Extraordinary rendition is a grievous infraction on International Conventions, treaties and protocol to which Nigeria is a signatory.
As such there is no court in Nigeria that has the competence to ever conduct hearing on any of the frivolous charge filed against Mazi Nnamdi Kanu without first undoing the illegality that brought him to Nigeria in the first place by taking him back to the country where he was brought from.
Even the Attorney General of the Federation Malami SAN in an erudite Extract he endorsed with his Foreword, from a United Nation Study on Extradition concerning Nigeria) totally agreed that extraordinary rendition is in itself, a crime against humanity, the extract is quoted verbatim as follows;
Rendition is a general term for all procedures including extradition, for returning wanted persons or aliens generally from one jurisdiction to another.
Unlawful or irregular forms of returning persons wanted for trials or punishment include abduction, kidnapping and the notorious Extraordinary rendition.
Extraordinary rendition is a government sponsored arrest, kidnap and abductions of persons wanted, accused or convicted of a criminal offence either against the state who sponsored the arrest, kidnap or abduction or to a willing third party.
Extraordinary rendition denies a person of the right to challenge his transfer to the requesting or receiving state. It involves the violation of the principles of international law especially where the person transferred are subjected to torture or sham criminal charges or trial.
The Dikko Affair of 1984 is an example of an attempt at unlawful rendition. After a Coup d’état in 1983, the Federal Military Government of Nigeria requested the British Government to surrender Umaru Diko, a former Minister alleged to have been involved in corrupt practices.
Before the British Government responded to the request, an intelligence officer from Nigerian security forces with three Israeli Nationals abducted. Dikko and attempted to cargo him to Nigeria in a crate.
This an attempt was foiled by the British security apparatus, the abductors were jailed and the relationship between Nigeria and British became strained. Even though not successful it was an attempt by Nigeria to go against the international norms in expressing its political will. Source; Nigeria/Cases and Materials on extradition in Nigeria is clear anywhere in the world.
Above is a very incisive information on extraordinary rendition duly sanctioned and approved by the Attorney General of the Federation, a person who is very guilty of the very infraction he is preaching against.
Mazi Nnamdi KANU must be unconditionally released and without further delay.
COMRADE EMMA POWERFUL MEDIA AND PUBLICITY SECRETARY FOR IPOB.
Published by:
Chibuike Nebeokike
For: IPOB
Facebook
Twitter
LinkedIn
PrevPreviousInternational Violation As IPOB Exposed FG Plot To Abduct Its Top Diaspora Based Officials
NextTarnish Image Of ESN: It Is Needless To Conscript Children Into ESN While We Have Thousands Of Biafrans Willing To Join ESN – IPOBNext