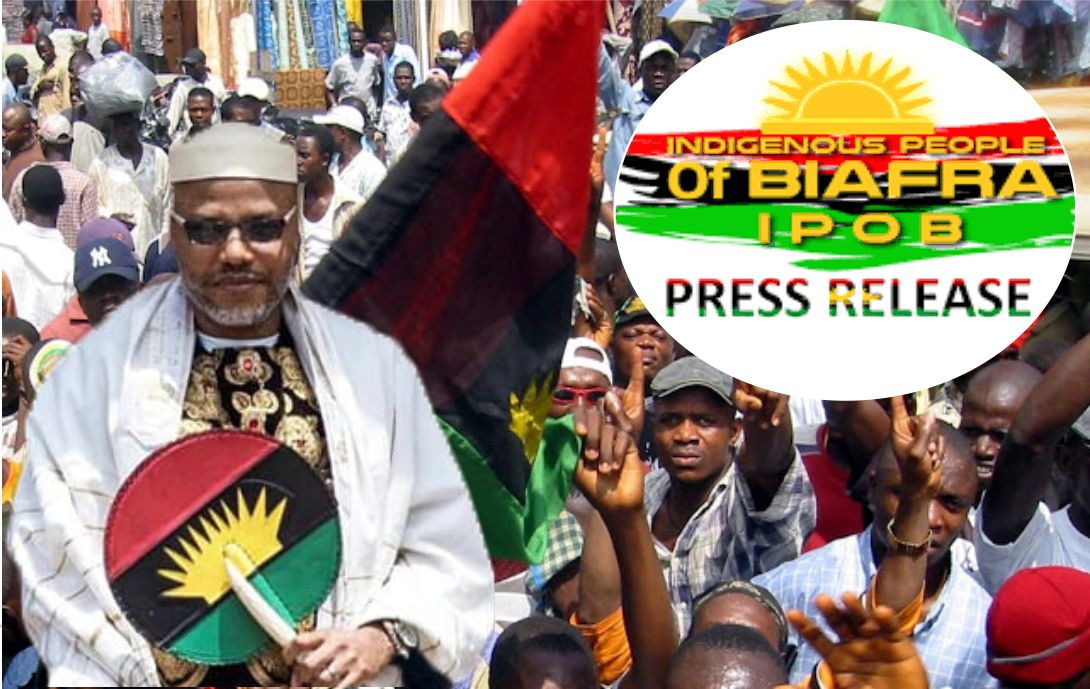 IPOB Press Release
January 15 2022 | IPOB
We are the Indigenous People of Biafra IPOB under the command of our indefatigable Leader, Mazi Nnamdi Kanu. Following our Leader’s upcoming court proceedings on the 18th, 19th and 20th of January 2022 next week, we wish to remind Biafrans that there will be only Sit-At-Home on 18th of January, and not 19th and 20th of January. In keeping with our avowed solidarity with our Leader, the entire Biafra land will be on lock down only on January 18 for obvious reasons.
Biafrans should understand that 19th January is the judgment day in the suit by our Leader against the Federal Government which is pending before an Umuahia High Court. So, there will be no Sit-At-Home on that day.
Again, we don’t want to compound the pains of our people, hence, we will limit the Sit-At-Home to only January 18. Biafrans and residents of Biafra are free to go about their businesses without molestations on 19th and 20th January. Anybody found enforcing non-existent Monday Sit-At-Home on 17th, 19th and 20th is criminal and must be treated as such, IPOB leadership have given order and that order is what our leader Mazi Nnamdi signed.
Everybody must be careful because these waves that are coming will consume many and every principal officer of IPOB, mostly the coordinators must know that it will bounce on their heads if they don’t checkmate the activities of their members and call them to order and report them to the appropriate authorities of IPOB.
IPOB is not a village meeting or social club where everybody has rights to behave untoward to the public like cultists. We will not accept that. Members of IPOB in Biafraland must be very careful from now onwards because the enemies want to create problems for them, but be rest assured that IPOB will overcome and win this fight we are into and our leader Mazi Nnamdi KANU must be released unconditionally whether the enemy likes it or not because he committed no crime known to law of Nigeria or international.
It is on the table and to the knowledge of IPOB leadership how some principal officers were encouraging evils in IPOB without minding the repercussions and consequences but we want to make it categorically known to them that it will come back to him or her who encourages evil against his or her fellow human beings.
No coordinator in Biafraland has the right to recruit ESN member into ESN camp, and those they recruited will soon be termed as criminals causing problem for IPOB members and ESN outfit.
For clarity sake, we reiterate that there will be no Sit-At-Home on January 19th and 20th. Nobody is expected to interfere with either human or vehicular movements in those days under any guise. Any detractor or agent of darkness caught obstructing people’s activities in Biafra land on January 19th and 20th in the name of enforcing Sit-At-Home will regret his or her actions.
We realized that some unscrupulous and traitors are trying to create confusion about these days and dishing false information and propaganda trying to create confusion in Biafra land. IPOB never declared Sit-At-Home on 19th and 20th of January 2022. Therefore, we want all Biafrans to go to their normal business on these days without fear.
Anybody issuing order for Sit-At-Home on 19th and 20th of January is not a member of IPOB. Such persons are working against the interest of our leader and the entire struggle for independence. They should be disregarded.
For the umpteenth time, IPOB is under one Central command and Control, and doesn’t have parallel or factional leadership. The Directorate of State (DOS) under the command of our leader, Mazi Nnamdi Kanu, is in charge of the global movement of IPOB.
Anybody who is not loyal to DOS is an impostor and should be disregarded.
We expect our people everywhere to adhere to this directive and refuse to be misled by sacked members of IPOB in Europe and America. IPOB remains unshakeable, built and rooted on the rock and will remain so until the freedom for Biafra is fully achieved.
COMRADE EMMA POWERFUL MEDIA AND PUBLICITY SECRETARY FOR IPOB
Published by:
Chibuike Nebeokike
For: IPOB
Facebook
Twitter
LinkedIn
PrevPreviousThe Presiding Judge Hon. Justice Binta Nyako Is An Accomplice To The Suffering Of Mazi Nnamdi Kanu – IPOB Alleges
NextASARI DOKUBO COLLUDING WITH THE FEDERAL GOVERNMENT AND SOME CORRUPT POLITICIANS TO RECRUIT CRIMIALS AND START KILLING BIAFRA AGITATORS – IPOBNext