OBIANO, IKPEAZU AND WIKE WANT TO WHITEWASH THE DAMNING AMNESTY INTERNATIONAL REPORT ON THE KILLING OF UNARMED PROTESTERS IN THEIR STATES 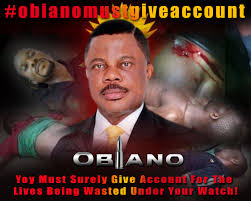 OBIANO, IKPEAZU AND WIKE CONNIVING WITH HAUSA FULANI SOLDIERS TO HIDE THE TRUTH OF THEIR BRUTAL MASSACRE OF IPOB MEMBERS & OTHER ATROCITIES
-They want to whitewash the damning Amnesty International Report on the killing of unarmed protesters in their states.
-IPOB calls for a fully independent international panel of enquiry headed by a non black African to investigate these crimes against humanity committed by the Nigerian Army and Police
The indigenous people of Biafra (IPOB) and it’s leadership worldwide raises alarm over the conspiracy between the FG and some State Governors to conceal the true impact of the Amnesty International reports on the killings of unarmed peaceful members of IPOB.
We wish to bring to the attention of the world the activities of the Governors of Abia, Anambra and River State who have been  in constant clandestine meetings with Nigerian Army to whitewash the Amnesty international reports which stated categorically the killings of unarmed peaceful members of IPOB in their respective states. Willie Obiano, Okezie Ikepeazu and Nyesom Wike supervised the repeated killings of unarmed defenseless civilians exercising their constitutionally guaranteed right to peaceful assembly.
IPOB Intelligence unit discovered how these three governors held series of meetings to rent a mob of poverty ravaged unscrupulous individuals in the society, to protest against AMNESTY INTERNATIONAL reports which indicted this current Nigerian Government and her security agencies especially the Nigerian Army.
We are minded of the current trend of this APC led government to rent a mob of miscreants for the paltry sum of 1000 Naira per protester, to put up a show of shame against any group or individuals that dares to challenge them with facts and figures.  A few days ago, such mob of recession ravaged miscreants were hired to shore up the crumbling, almost non-existent, reputation of President Buhari in Igweocha (Port Harcourt) Rivers State capital.
Also, it is on record that this visionless government of President Buhari are also in the despicable business of setting up phantom and in most cases completely fraudulent non-governmental organisations that nobody has ever heard of before, to protest against renowned organisations like the Amnesty International. The APC show of shame in the Abuja offices of Amnesty International last week, where the hired crowd were seen collecting their share of money that APC government promised them, serves as a warning to those involved in ensuring that justice is served in the case of the murdered IPOB protesters. A government that will take advantage of economic hardship to mobilise a mob at will should not be trusted to handle an inquiry of the magnitude being proposed, in order to uncover the reason behind the endless massacre of IPOB unarmed rally goers.
It is unfortunate that the Government of Nigeria and her security agencies especially the Army would allowed themselves to be at the forefront of deplorable human rights abuses committed and still being committed in a desperate attempt to stop Biafra restoration.
Therefore, we call on all Biafrans and lovers of freedom to beware of the proposed protest against the Amnesty International reports on the killings of unarmed peaceful members of IPOB sponsored by Willie Obiano and Okezie Ikepeazu with the help of a few Igbo and South South retired military personnel.
The facts are that the whole world are today asking questions as to why the Nigerian Government of President Buhari persistently kill innocent civilians on a peaceful protest. Buhari’s APC regime has now connived with two Igbo political desperados in Obiano and Ikepeazu to produce a false report that will claim that people were not killed. They have even perfected their plans to rent a few who will claim they are IPOB members to help cement their lies. Their whole aim is to thwart the arrival of an independent world investigative team that is slated to come to Biafran to conduct a thorough public enquiry.
IPOB is disappointed with the three governors who knew when the various Army and Police formations in their respective states went on unprovoked rampage, killing and maiming unarmed members of IPOB under the supreme leadership of Mazi Nnamdi Kanu. They have sold their soul and conscience to money and political power hence their willingness to use their executive powers as state governors to testify against what they know really happened in their states.
Anybody who is responsible or complicit in the killing of IPOB members, from Buhari to Obiano, Ikepeazu, Wike to the last army recruit that fired their riffle at peaceful protesters, will be held accountable. None will go unpunished because the blood of the dead will not allow us to forgive those responsible for these crimes against humanity.
COMRADE EMMA POWERFUL MEDIA AND PUBLICITY SECRETARY FOR IPOB.
Facebook
Twitter
LinkedIn
PrevPreviousTwitter Campaign: IPOB Cautions Justice Binta Nyako to remain Neutral and Stop aiding the Prosecution in the Trial of Nnamdi Kanu
NextIPOB TO LOCKDOWN BIAFRALAND ON 30 MAY 2017 IN HONOUR OF FALLEN HEROESNext