Onitsha Inferno: We Commiserate with families that lost their loved ones – IPOB 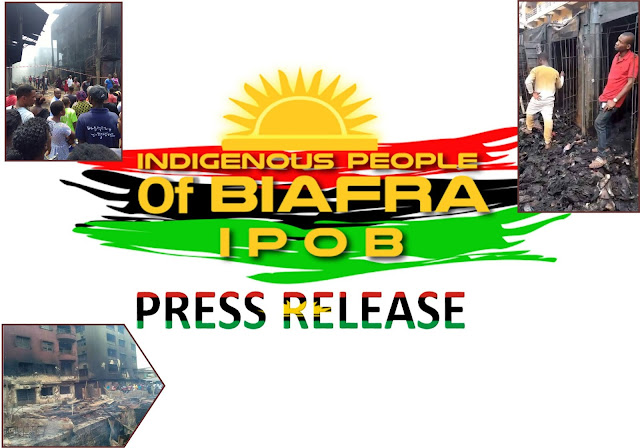 With a profound sense of deep sorrow and sadness, we commiserate with all the families and communities that lost loved ones over the terror attack in Onitsha on the 16 October 2019. This is not the first time an articulated Dangote lorry or a tanker driven by a terrorist ladden with inflammable liquid has been involved in mass fatalities in Onitsha or other parts of Anambra State. The story is always the same, its either their trailer had brake failure or their tanker exploded, all resulting in massive loss of lives and destruction of individually owned businesses.

We the Indigenous People of Biafra (IPOB) call these callous and wicked acts for what it is- a cowardly terrorist attack designed by those evil men determined to exterminate we Biafrans from the face of the earth and carried out by those that think they are serving a Jihadi cause that will bring about the Islamisation of Biafraland through terrorism. At a time when Fulani herdsmen sponsored by the caliphate are actively engaged in the forceful acquisition of our lands in Ebonyi, Enugu, Anambra, and Abia, aided by the Nigerian Army under the guise of Operation Python Dance 4, this massive loss of lives and businesses in Onitsha is most unwelcome.

The question we keep asking is, why are there no exploding tankers in crowded streets of Kano, Kaduna or Sokoto? Why must tankers driven by northerners always explode in the south or the brakes of their trailers always fail in Biafraland? It is time now for our people to wake up to this new reality of population reduction by those intent on the destruction of the Biafran race.

We Biafrans as a people are under immense siege from our enemies on multiple fronts. They are determined to conquer and subjugate us by all means but we IPOB shall continue to resist them regardless of human and material cost.

It is not a coincidence that at a time when Biafrans are being persecuted in India, South Africa, Togo, Congo, Indonesia, and Malaysia at the instigation of the Government of Nigeria, our land being forcibly given to Fulani terror herdsmen by weak South East governors; Ohaneze Ndigbo slavishly and treacherously going down on their knees to beg the caliphate to make Nnia Nwodo a lapdog president of the north, coupled with the closure of land borders in the south of Nigeria while those in the north remain open; using Operation Python Dance 4 to terrorise innocent civilians to submit to the will of the Fulani caliphate, are all well marshalled schemes designed to instil fear, strangulate Biafran businesses across West Africa, render Biafraland economically impotent and prepare Biafrans for total annihilation.

Every Biafran must wake up to this inevitable reality that our governors and Ohaneze have sold us and our children’s future to their Fulani masters. What awaits us all is slavery and servitude unless we rise up to support Biafra restoration as puritanically championed by IPOB. The fire outbreak in Onitsha was designed and orchestrated by a few individuals who used a Fulani driver to perfect this most heinous terrorists attack on the peace-loving people of Biafra. Even in midst of this terrible attack the incompetence and carelessness of Governor Willie Obiano shone through. Anambra State government was unable to mobilise paid firefighters or summon a fire engine to help with efforts to put out the inferno, instead, Willie Obiano ordered the arrest of those that volunteered to stop the fire from spreading.

One thing is certain, there is no way they can succeed because IPOB is already withstanding and confronting them in all forms and on all fronts.