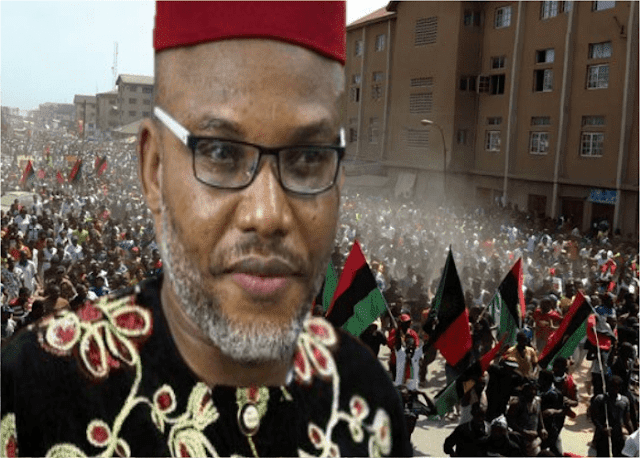 IPOB PRESS RELEASE
July 3, 2018
With recently leaked intelligence on the whereabouts of our leader, widely reported on all major news platforms, exposing where the Nigerian Government kept our leader Mazi Nnamdi Kanu, we expect the same Nigerian Army that abducted him to charge him to court or release him to the British government. Despite the best efforts of Aso Rock propaganda unit, in concert with Igbo Efulefus to sweep the deadly army invasion of Isiama Afaraukwu on September 14, 2017, that resulted in the death of 28 people under the carpet, this timely intelligence information have nailed their lies to the mast for the world to see.
It is now clear to all and sundry that orchestrated sightings of our leader in Cameroon, Ghana, Niger Delta creeks, Malaysia, London and other weird and wonderful places were lies concocted and planted in mainstream Nigeria media to fool and confuse the public. We the global family of the indigenous people of Biafra (IPOB) and it’s leadership wish to reiterate our call to United Nations, Britain, USA and other civilised nations to compel Nigeria to produce our leader. Nigerian Army abducted him when they raided his home with deadly intent.
We know Nigeria is fast becoming a failed state where there are no civilised rules or behaviour. This obvious fact notwithstanding, there is no law in Nigeria, ECOWAS, AU or United Nations that empowers the Nigerian armed forces to kidnap and detain people at will without recourse to a court of law.  Failure to release our leader is an invitation to anarchy because the leadership of IPOB cannot guarantee how long the simmering rage of the masses can be contained.
The periodic harassment of those that stood surety for our leader through Justice Binta Nyako’s court is a clever ploy to drum the false narrative into the brains of Nigerians that our leader jumped bail, when in actual fact it was the army that invaded his home and killed 28 people in the process. What the government may have succeeded in doing is convincing some gullible people that deadly invasion of Kanu’s home by Nigerian soldiers that led to many being shot dead and injured, doesn’t matter and should be forgotten.
This Nigerian Government headed by Major General Muhammadu Buhari and his soldiers must release our leader Mazi Nnamdi Kanu and others abducted alongside him last year during the invasion of his compound, without further delay. Or they can await the catastrophic consequences their extra-judicial killing spree will cause in the near future.
Those in the habit of condoning the excessive human rights abuses of this APC government must know, in the words of one Sir Arthur “Bomber” Harris, that he who sows the wind, will reap the whirlwind. When the inevitable breakdown of law and order starts,  amateur historians and government propagandists should not seek to shift the blame to anybody else. They should be brave enough to acknowledge their handling of the brutality of this Buhari’s regime was the catalyst for the inevitable violent demise of Nigeria.
Nigerian Government and her security operatives must produce our leader Mazi Nnamdi Kanu and others abducted with him last year. A near derelict naval vessel stationed in the high sea is not a court of law where guilt and innocence are determined, that remains the exclusive preserve of a court of law.
COMRADE EMMA POWERFUL MEDIA AND PUBLICITY SECRETARY FOR IPOB.
Facebook
Twitter
LinkedIn
PrevPreviousBombing of Nwodo’s home: Police, DSS and Ohanaeze are hell-bent to tarnish our image – IPOB
NextIPOB DECLARE SEIZE FIRE ON OHANAEZE NDIGBO AND MEETS OHANAEZE ON A ROUNDTABLE DISCUSSIONNext