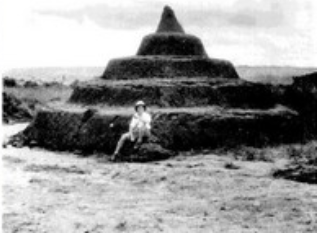 Pyramids, 10 in number, have been discovered in Udi, in Enugu state in Igboland of Nigeria.  Known as the Nsude pyramids, these ten circular stepped pyramids were associated with the Uto deity and were made of mud. Their reconstruction is needed, some tourists  and scholars, including Wikipedia have said.
The discovery, made in the early 1930s by an archeologist, G.I. Jones,  were not made public until a few years back. Now they have been published online, a research resource designed to make Jones photographs available to people who have a personal or professional interest in the art of Southeastern Nigeria.
The site says the limited information provided reproduces the notes written by Jones on the photos. Jones published the some of the photographs with additional documentation. Researchers are encouraged to consult the bibliography.
The copyright for these photographs is held by the  G.I. Jones Estate. The copyright is administered by the Museum of Anrchaeology of Anthropology at Cambridge University. 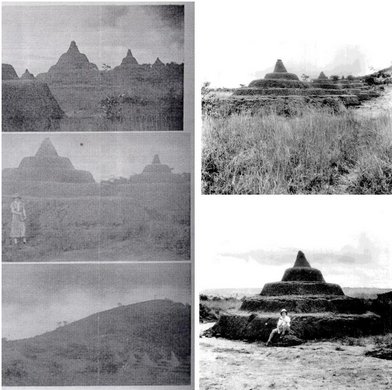 contact the Museum’s Senior Assistant Curator at
A report in Wikipedia on world pyramids says, “One of the unique structures of Igbo culture was the Nsude Pyramids, at the Nigerian town of Nsude, northern Igboland. Ten pyramidal structures were built of clay/mud. The first base section was 60 ft. in circumference and 3 ft. in height. The next stack was 45 ft. in circumference. Circular stacks continued, till it reached the top. The structures were temples for the god Ala/Uto, who was believed to reside at the top. A stick was placed at the top to represent the god’s residence. The structures were laid in groups of five parallel to each other. Because it was built of clay/mud like the Deffufa of Nubia, time has taken its  toll requiring periodic reconstruction.
One of the Igbo scholars who knew about this pyramids, Obi Nwakanma, said,”Yes, the Igbo built pyramids long before Egypt. There are much more that people do not know about “Uwa ndi Igbo” -and I have also said, that one of the reasons why the British suppressed archeological work on the Igbo is that they saw its complexity, and became frightened by what they saw: Yt was going to dismantle the frame upon which colonialism was built – the entire notion of the “civilizing mission” which like today’s “spreading democracy” was simply an excuse to dominate cultures. The Igbo are the most unstudied civilization . Igbo civilization preceded Egypt; Eze Nri Meabua – who had the ability to appear in numerous places at the same time – the traveling priest whom lores call Melchizedek, while some call him Thoth the teacher of Osiris, and the Greeks called him Hermes taught the ancient world the idea of Chi Ukwu, and spread the Igbo message of “Udo” and the end of the blood ritual.
“All these ideas had their roots in Igbo experience. I have said, on another occasion, that the story of Atlantis is the story of the Igbo world. It is not lost, people are just not digging in the right places. Listen carefully to the myth of Amadi-Oha the tyrant. Listen carefully to how the Igbo came to adopt the peace rite as the central basis of its religion. Ask yourself, who are those African faces that travelled through the ocean and had contact with great Indian civilizations which they retained in their stories; who were those black faces carved into the rocks of the Inca, now in Mexico, long before Columbus? These are questions we do not ask, although can recover their answers by listening to Igbo tales and proverbs which seem to be where fragments are preserved.

The unfortunate thing however is that those who have merely an ersatz knowledge of the Igbo, begin to interpret and describe the Igbo from its decline from the middle of the 17th century, when the impact of the first moments of globalization and the trade in slaves began to destroy the ethical base of the Igbo. In Greek cartography, the areas described in mythical terms as the land of great magic and gods, where Jason went to seek the golden fleece is clearly the Igbo world. But the gods have become men, and are today not only human, but such that have forgotten who they are: they have been fed an alien broth and the speak in tongue. The other tragedy is that we have failed to preserve some of these sites of heritage, such that it always begins to seem like the Igbo had no past, and are lost in limbo. Igbo studies programs may someday, hopefully, begin the actual work of recovery and ask, why is G.I. Jones collections in the backwoods of Carbondale, Illionois? A peculiar mess. Ndewo.
an Igbo blogger said, “Excavations have been done on how Igbo ancestors built many ancient civilizations such as the Ugwelle (6000 BCE), Afikpo (3000 BCE), Nsukka (3000 BCE), UmuEri/UmuNri dynasties (500 BCE), Igbo Ukwu (900 CE), and etc. We developed sophisticated architecture such as the Nsude pyramids in Agbaja, Mbari structures, and etc. Igbos developed writing scripts such as Uli, Aniocha writing systems, Nsidibi, Ikwu, and many more. The level of knowledge and scientific (especially metaphysics) discoveries and practices done by the Igbo Civilizations is most likely beyond our imagination. We have a long history of achievements.”