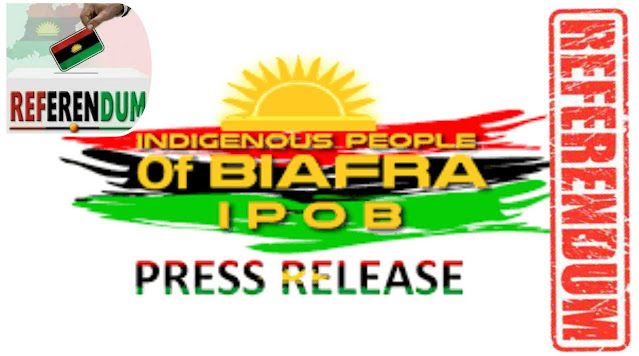 IPOB PRESS RELEASE
January 15 2021 | IPOB
It’s quite ironic that Nigeria is still remembering the genocidal war of 1967- 1970 – the war which was planned to annihilate the people of the Old Eastern region, yet perpetrating the same actions that gave rise to the avoidable confrontation.
One of the major reasons the memories of that war cannot be easily erased from the minds of Biafrans is that today the oppressors have continued to repeat the same actions they visited on us with more impunity. Instead of treating Biafrans as equal stakeholders in the affairs of the country they have continued to subjugate and hunt down our people with the help collaborators in government houses in the east and Igbo professional traitors based in Abuja & Lagos. IPOB family members and other Biafran agitators have remained daily targets of the oppressor and their security agencies who see the South as a conquered territory and its indigenous inhabitants ripe for elimination at all cost.
The question every rational being must as is this; Why is Nigeria living in self-denial? Despite repeated warnings, sometimes from those who previously worked against Biafra, that Nigeria is fast traveling on the same highway that led to the war in 1967, those at the helm of leadership in the Zoo that laughably refer to themselves as the ‘elites’ have chosen to play the ostrich.
Instead of playing to the gallery with warm words and empty promises, the time has come for these mischievous political hoodlums masquerading as elites in Nigeria to courageously do the needful and permanently address the root cause of the ever-growing agitations across the Lugardian contraption. There is only one universally acknowledged solution to the problems bedevilling One Nigeria, it is called Referendum. This will enable and more importantly give the various ethnic nationalities forcibly clamped together into the undesirable British engineered colonial cage, the choice to decide whether or not they wish to continue their miserable coexistence or not.
I understand the fear and apprehension of ethnic groups in Arewa core North living under Fulani hegemonic bondage. We would like to reassure them that Biafra won’t abandon them. The Biafra project is designed to set every oppressed group within Nigeria free, not just the long-suffering people of the East. A referendum or plebiscite remains the best tool to determine the fate of the masses not the dictates of half-educated semi-literate corrupt nonentities in Abuja.
This is 51 years after Harold Wilson’s failed attempt to wipe out the entire Igbo Biafran race from the face of the earth. The Fulani agents of neo-colonialism he used have now perfected the same art of using compromised individuals and Efulefus in the East to frustrate our march towards freedom for all. They cannot succeed because the people they have been deceiving over the years are now smarter.
We agree with most of the germane issues raised at the webinar conference organized yesterday by Nzuko Umunna which further exposed some of the atrocities committed against Biafrans in the genocidal war 51 years ago. This was purely to let them know that we have not forgotten what they did to our fathers and mothers between 1966 and 1970.
From the sensible contributions of eminent Nigerians in that gathering, it’s now obvious to the Fulani ruling cabal running the country that no one is happy with what is happening. Those frank observations emanated from the few prominent and respected Nigerians including politicians and religious leaders. This is a reminder to those thinking that they have pocketed Nigeria to stop living in self-delusion. The youths of Nigeria are rising to rescue the country from those who have taken it hostage. Biafra will soon bid farewell to the contraption and no force can stop this divine movement.
IPOB is perfecting arrangement to ensure that Biafra is restored without another war but if our oppressors refuse to heed our calls for referendum, then they will later realize that IPOB is determined to pay whatever sacrifice to free our people from this bondage.
COMRADE EMMA POWERFUL MEDIA AND PUBLICITY SECRETARY FOR IPOB
Published by:
Chibuike John Nebeokike
For: IPOB
Facebook
Twitter
LinkedIn
PrevPreviousNNAMDI KANU’S REPATRIATION CALL: AN ATTEMPT BY A CRIMINALLY COMPLICIT GOVERNMENT TO APPEAR RELEVANT
NextWhy We Can’t Recognize Obiozor As Ohanaeze President ~ IPOBNext