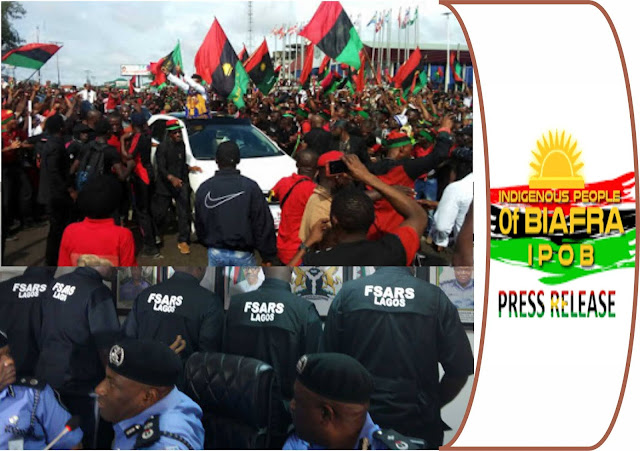 We the global family of the Indigenous People of Biafra (IPOB) ably led by our great Leader, Mazi Nnamdi Kanu wish to bring to the notice of the international community the unabated secret abduction, torture, detention, and killing of our members by the wicked Nigeria security agents. These callous beings in security uniform also sell off the body parts of some of their victims to ritualists. At the helm of this atrocity and inhumanity is the Special Anti-Robbery Squad (SARS).

The Nigeria Police SARS in Awkuzu Anambra State and Obigbo in Igweocha Rivers State as well as Anti kidnapping squad security stationed at Enugu Ukwu in Anambra State are in constant hunt for IPOB member. They have also been responsible for the disappearance of many innocent Biafrans some of whom they have wasted thinking they are IPOB members.

Many Biafran youths detained illegally in their different cells have disappeared mysteriously without any trace of their bodies until recently when our intelligence revealed that body parts of these innocent victims are being sold to ritualistic, while some are destroyed with acid to conceal evidence. IPOB members in Anambra, Enugu, Igweocha Rivers, Delta, Abia, Imo and other states are missing every day.

It is regrettable that many parents and families looking for their children detained illegally in the SARS cells across Biafraland, may not see them again. For instance

Mazi Isaac Okwuchukwu from Ogidi, Mazi Solomon Nwankwo from Oraifite and Mazi Tochukwu Onyebuchi from Nkpor and many others, were all taken away and killed by the men of Nigeria SARS at Awkuzu in Oyi LGA of Anambra State.

Since 1945 the elimination of Biafra civilian population and unarmed citizens has been continued unabated in Nigeria. But it’s time to stop this systematic massacre of Biafrans in Nigeria. IPOB will no longer tolerate this dastardly act and state -sponsored genocide.

The world must rise against this abomination.

It’s rather a shame and an international embarrassment that the same Nigeria security which could not protect Borno State Governor from Boko Haram terrorists who attacked his convoy and killed no fewer than 30 persons including security operatives, is busy chasing innocent IPOB members in Biafra land. Instead of dealing with the terrorists that are daily reducing the number of Nigeria soldiers and civilians, the security agents are busy crushing unarmed freedom agitators.

What a shame! We are sending Save Our Soul, SOS, message to the United Kingdom, UK High Commission in Nigeria, Amnesty International in Nigeria, Human Rights Watch, US Embassy in Abuja, Canada, African Union, Commonwealth, Europe Union, UN Human Rights, and civilised nations across the globe including civil society organizations to please come to our rescue.

We call for unbiased investigation of this matter. For God’s sake the international community should rise up against this wickedness. They must prevail on the wicked Nigeria security particularly SARS in Awkuzu SARS, Obigbo SARS, Aba SARS, and ENUGU SARA to stop killing our people without provocation. They should also stop desecration of their bodies by selling them off as humans’ parts to ritualists.

We demand justice for the innocent victims. The world should not keep quiet because it’s black. The perpetrator should be brought to book without delay.

We also want to state that IPOB has no hand in the alleged killing of a SARS operative in Obigbo Rivers State. The police should look for those responsible for the alleged killing and stop linking IPOB with the incident. We are a peaceful movement seeking the restoration of Biafra. We are not after security agents, but any day they push us into arms struggle they will live in regrets all through their lives. Our peaceful disposition should not be taken for a weakness.