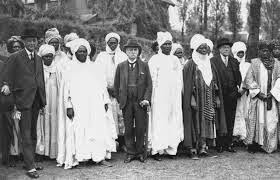 Selected Correspondence: The Royal Niger Company
GEORGE TAUBMAN GOLDIE AND FREDERICK  LUGARD
9th
The Liman came today, and went off to see the King and finally arrange about who was to represent him, regarding the business I wanted to speak of. He promised to be back again by 1or2 P.M. He duly turned up with two more ch1efs who with himself were deputed to represent the King. We went though the treaty very carefully, as before I explained and paraphrased every sentence, and those who understood Hausa re-translated it into Borgu for those who did not. The Liman of course speaks Hausa.

He led the way the moment Joseph had translated each sentence in saying ‘Keoh’ (good, excellent) with the air of a man calling for ‘3 cheers’. The other principal chief only spoke Borgu, and a man of his own, I think, translated it for him, when he too was quite pleased with everything. So we finished by sunset.
I have written a great number of English letters today. I showed them the
King of Ilorin’s letter, also Kaiama’s-one of the men read them. They took
IIorin’s letter as a sample to write me another like it to carry me on my way.

(A copy of the Nikki treaty was sent to the Fore1gn Office by the Niger Company and is in F.O. 2/167, p.194. The printed treaty form is used, with insertions copied by hand; here these insertions are given in italics.)

(Form No. 12.) (For Moslems.) Treaty made on the 10th day of November
1894, between The King of Nikki (which is the capital of Borgu), on the one hand, and THE ROYAL NIGER COMPANY, Chartered and Limited, tor them­selves and their assigns, forever, hereinafter called ‘The Company’, on the other hand.

1.    I, Lafia (also called Absalamu, son of Wurukura), King of Nikki and of all Borgu country, with the view of bettering the condition of my country and people, hereby give to The Company and their assigns, for ever, full criminal and civil jurisdiction of every kind over aJI Foreigners to my country, includ­ing the rights of protection and taxation, and I pledge myself and my suc­cessors not to exercise any jurisdiction whatsoever over such Foreigners with­out the sanction of The Company.

2. I bind myself not to  have any intercourse, as representing my tribe or State, on tribal or State affairs with any Foreigner or Foreign Government other  than The  Company;  but  this provision shall not  be interpreted  as authorizing any monopoly of trade, direct or indirect, by The  Company or others,  nor any restriction of  private or commercial intercourse with  any person or persons; subject, however, to such administrative measures as may be taken by The Company, as a Government, in the interests of order and of commerce.

3- I recognize that the Company, as a Government, represents Her Majesty the Queen of Great Britain and Ireland, and T  accept the protection of the British Flag, but I understand  that such protection against  the attacks  of neighbouring tribes can only be afforded as far as practicable.

4. I give to The Company and their assigns, forever, the sole right to mine or dispose of mining rights in any portion of my territory.

5. In consideration of the foregoing, The Company bind themselves to interfere with any of the native laws or customs of the country, consistently with the maintenance of order and good government and the progress of civilization.

6. As a pledge of their good £1ith, The Company have this day paid the said Lafia, King of Nikki and Borgu, a donation, receipt of which is hereby ac­knowledged.
This Treaty having been interpreted to us (the representation deputed to act for him by the above-mentioned Lafia, King of Nikki and of Borgu), we hereby approve and accept it for the King and for his successors forever.