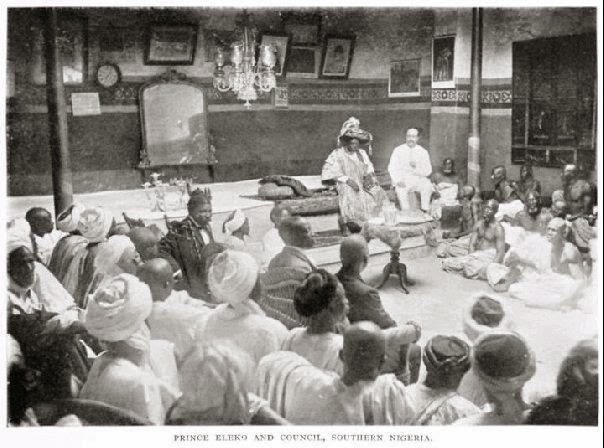 19th
We were to have left today, but there is now no chance of it. I would greatly have liked  to go  out  shooting this  morning but  refrained  lest  the  King’s message might come in my absence. Instead of this a message was returned by Joseph {whom I had sent to ask if the letter &c. was ready) to say that before writing it he wished to see us again, that today he had some ceremonies to perform in the vicinity of my camp near the river, about 2 P.M., and later in the evening would see us.

Bye and bye another message came to ask me to take my tent away as his horses must be tethered on the spot. So I had to pack up, strike my tent, and move to Watts’ house!-Quousque tandem! Later again a message came to ask for spirits as he was making holiday, tho’ he well knows they are prohibited. I replied we had not a drop public or private.

I asked Watts if all this is the customary procedure. He says it is, and that when he goes to Bida he prepares to wait 10 days! I asked if Macdonald was treated like this for he came as a Government Official and put on full uniform, with Ferryman as a Lieutenant, and hundreds of porters carrying every con­ceivable luxury, and with large presents. Watts replied that Bida refused to see him in a hurry thereupon M. said he would go, and would not give him his present. Bida replied he could keep the present for he did not want it! Mac­donald sent the present and left! The King of Yola was even worse, and refused to see Macdonald at all!

I don’t see my way dearly in this business I have undertaken. I am al-together the wrong man. The ‘intrepid French explorers’ who have succeeded in penetrating these countries with a handful of men and no goods or rifles, and have brought back packets of treaties, are roundly accused here of never having translated the real contents of these treaties. Facts seem to point to this conclusion. To secure a treaty with Sokoto, Thomson spent £500. Mac­donald’s futile trip to Bida when he never was received by the king at all cost £80. Bida gets presents of £500 at a time, and a subsidy of about £3000.

Even a petty chief like Bussa gets a small subsidy-how then could Frenchmen secure important treaties for nothing at all? Again they say here, that once a Frenchman has got his soi disant treaty he clears out, and if the French want to come into the country with which they have made a treaty they invariably have to fight, which shews that the treaty was Nil. Mizon’s methods of which we have some accurate knowledge are a case in point. Now I am not that class of man, so success on those Lines is denied me. The alternative is apparently a man who will eat any amount of dirt. Bida threatened to cut off Wallace’s head and he is deputy to Flint and Agent General when he [Flint] is at home. Nothing was done; MacTaggart was tied to a tree and shot at-and another agent was flogged! A man used to trading, arguing, haggling, and not to ruling or asserting himself might succeed but I could hardly have been chosen on those grounds!

Meanwhile yesterday and today the people I have sent to purchase food cannot get a single yam. The men in camp pick up some, but there are few if any women hawking goods, as at Yashikera, Kaiama &c. where the air re­ sounded from morning till night, with the monotonous cry of the women, crying their goods for sale. There is a report in camp that the King has given orders that no provisions are to be sold to us. I trust it may not prove true-for 415 rations are daily wanted. Borgu is a trying country to travel in!

The Liman was all the afternoon  with  the  King, and came as he  had promised to me after night-fall. He is an old man, somewhat garrulous but shrewd. I found out from him that the real obstacle is that the King-or rather the people-are possessed by this prophecy that if the King sees a European he will die within 3 months. He said that nothing would induce them to allow me to see the King. Moreover, as he justly remarked, supposing that the King, who is old and blind, did happen in the course of nature to die within 3 months, what would happen to the prince of Yashikera who had so strongly urged our coming, and to himself?

Mentally I went a step further and thought what a hole we should be in if the silly old pagan died now! The whole population  of Borgu would rise to rend us-ergo let us reduce the chance as far as may be by getting away as soon as possible.1thanked the old man, and said I was glad to know the real reason, and not to have evasive answers and false reasons. I had before once been placed in  this identical position (at Ankole), but the King agreed to send his son who made blood brotherhood  with  me, and 4 old Councillors  to whose words he pledged himself. The Liman said that he would be the King’s proxy, and would bring a confidential slave from the King who would witness everything he said or did.

I pressed the matter of 4leading chiefs, but it seems that they are as afraid to see a White man as the King is. I don’t believe this, for the King’s son came to see me yesterday, and later the old Liman said incidentally that so soon as the matter was settled I should be flooded with visitors. He wishes, of course, to keep the whole game in his hands, and aggrandise himself, and secure a regal present in conscquence. It will be a difficult matter to handle for if I offend him my chance is gone.

I then said that as he professed to be a man of such influence-he said that it was he who put the King of Kaiama on his throne, and the King was wholly guided by him-how was it that he came to see me secretly by night? This hit the root of the matter, for I well knew that the absence of any present of a single yam or of water meant that things were not yet right. The King had insisted on my messengers bringing a present. I had refused, and said that as his guest it was right he should first send me food and water at once on my arrival. We had not come to trade, nor was I a trader, but an officer, and his guest by invitation. It was on this subject mainly that the Liman had gone to the King. He now said he had wholly succeeded, that the King had had the drums beaten round the town, for everyone to bring yams, and tomorrow or next day they would be here, with the water.

It is the custom to send (as at Kaiama) a great number of women carrying gourds of water- not only I take it is this a civility to save our drawing it, but it means, I suppose, that we are welcome to the water (viz. to the country) an entirely African idea. Thus in East Africa it is for permission to draw water that Hongo is demanded. Till the King had sent these presents the Liman said he could not come openly­ all the people were most eager to see us, and to see our camp, but dare nor come till this had taken place, not knowing the King’s attitude towards us. If true I have scored a point, and made the King climb down. It appears, however, that the reason chiefs have not visited me is not because they fear the prophecy which refers to the King only, but because the King has not yet sent yarns and water.

After this interview I gave the old man a piece of brocade, and a quire or so of the crested Mohammedan paper. He was greatly pleased-it seems now as though everything depends on him at the moment.  I told him with great force the urgent necessity of haste. Traders come and settle down for a month to sell their goods, we have no such object but are bound for a distant country, and each day’s halt costs us a bale of cloth to feed our men. Nothing can be done till the King’s present comes, and he assures me it will be here tomorrow. I then told Joseph to take him off and have .t quiet talk, and broach the subject of the treaty, and tell him its main provisions from memory. This he says he did, and that the Liman said there would be no difficulty now that the matter was in his hands, I hope it may prove so.
Miscellaneous work today-completed the Caravan book, wrote up diary, wrote a few letters &c.