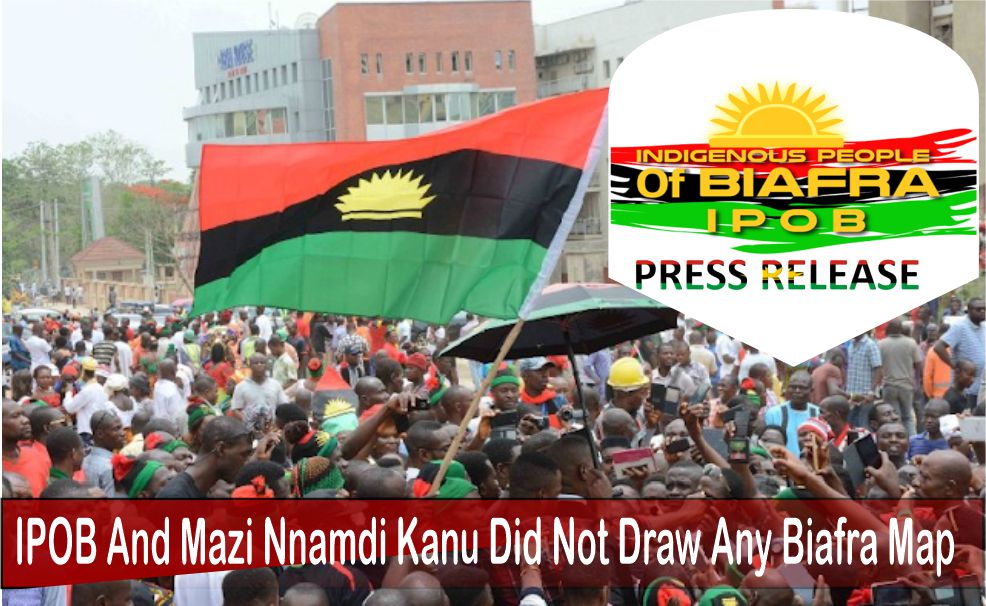 IPOB Press Release
January 22 2022 | IPOB
We are the global movement and family of the Indigenous People of Biafra IPOB under the command and leadership of Mazi Nnamdi Kanu. Our attention has been drawn to the blackmail being sponsored by our detractors that IPOB has drawn the Biafra map. We, therefore, want to debunk such fallacious narrative. We did not draw any Biafra map.
We understand that some people in the coastal region of Biafra are misinformed and deceived with false information that IPOB, Nnamdi Kanu and Igbo have drawn the map of Biafra. It is false and intended to set us against ourselves. The issue of Biafra map should not generate any heat because we know ourselves.
Ijaw National Council (INC) should understand and remember that their brother Dr Frank Opigo initiated the name Biafra which we answer today. They should stop saying that Ijaw wasn’t conquered pre-colonial and Colonial era because Igbo never said they were conquered.
Igbo people never conquered any tribe in the old Eastern region because our fathers saw themselves as one family, and today IPOB and Nnamdi KANU have towed the peaceful steps and accommodating spirits of our fathers but if any tribe undermined, no problem they can continue on their own. Being part of BIAFRA will never be by coercion but a voluntary matter through referendum.
Any tribe or ethnicity who doesn’t want to be part of Biafra will never be forced to do so. Such tribes are free to go on their own but you must conduct referendum for your people to decide their fate on the agitation for Biafra.
We can attest that Igbo people never fought against any tribe in olden days because Igbo believe in (“Onyeaghala Nwanne ya and, Ibiri Kamu biri” ~ live and let live). Again, Ijaw tribe and other tribes in the old Eastern region including Mid-Western region are Igbo brothers and sisters today, tomorrow and forever.
Igbo are not going to force anybody or tribe to join the fight for Biafra freedom. Let every tribe try what they can to wake up for their freedom because freedom is good and remains the best for all of us.
No tribe in the old Eastern region and Western region should allow themselves to be deceived because Nnamdi KANU and IPOB did not draw map for Biafra. Instead, we are staking our precious lives for all and it is the sacrifice we ought to pay for the realization of our and independence.
We are staking all we have for this freedom project, without Igbo tribe being in forefront of this struggle the struggle would have been a thing of the past and we must continue until freedom is totally achieved.
Again, we appreciate the move by Izon tribe and other tribes in the region to achieve freedom but they should not look by the side because if they do, they will lose their focus then the freedom will move out of their hands, let them focus and stop displaying their hatred against Igbo tribe without Igbo they are gone in this Nigeria designed and approved for Fulani to control. They should know that IPOB and Igbo are not their problems but Fulani and the compromised politicians in our midst.
COMRADE EMMA POWERFUL MEDIA AND PUBLICITY SECRETARY FOR IPOB
Published by:
Chibuike Nebeokike
For: IPOB
Facebook
Twitter
LinkedIn
PrevPreviousASARI DOKUBO COLLUDING WITH THE FEDERAL GOVERNMENT AND SOME CORRUPT POLITICIANS TO RECRUIT CRIMIALS AND START KILLING BIAFRA AGITATORS – IPOB
NextIPOB WARNS AGAINST PLOT TO SECRETLY EXECUTE DETAINED OBIGBO YOUTHS BY NIGERIA MILITARYNext