THE 1914 AMALGAMATION, THE BANE OF OUR EXISTENCE 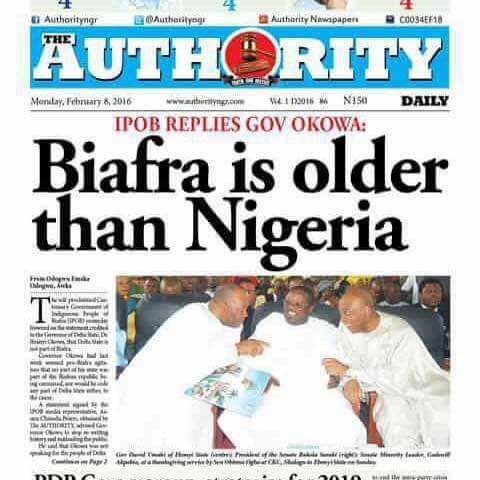 Every problem Nigeria has ever faced and will ever face can be traced to that demonic event of 1914 where the British merged the Southern and Northern protectorate into one country that is today known as Nigeria.
Britain had only one thing in mind while carrying out the amalgamation; their administrative and economic convenience. Nothing more.
The action of the British can be compared to a man who bought both herbivorous and carnivorous animals from the market and chose to put them in one cage to make it convenient for him to transport them home. This man knew that herbivores feed on herb and are very harmless and easy going while carnivores feed on flesh and are most times very aggressive and violent. In other words, the herbivorous animals in that cage might end up as meat for the carnivorous ones even before the man would reach his destination. He knew all these but still chose to put both animals together.
Do we need the brain of Albert Einstein to figure out the fact that the welfare of these animals was the last thing on this man’s mind? Rather, all he cared about was getting them all home whether dead or alive without spending extra money for another cage and extra transport fare for that new cage.
Even my 3-month old niece knows that the North and South has absolutely nothing in common. Not the same language, not the same culture, not the same religion, not the same ancestry, not even the same world views and as such, can’t possibly live together as one country.
Nigeria is many nations forced to remain within an unworkable forced marriage. The amalgamation was borne out of compulsion.
That line “one Nation bound in freedom, peace and unity” in our national anthem is one hell of a dirty lie. Where is the freedom? Where is the peace? Where is the unity?
I really think we’ve had enough of the rhetorics, the lies, the delusion. It is time we get down to the real business of paying ourselves the courtesy of being blunt.
The #OneNigeria slogan is one of the biggest organised lies of the century. There is absolutely nothing #One about Nigeria.
If we look at all the happenings in the country since 1914 till date, we will discover that the only thing that bind us together is mutual suspicion for one another.
it is beyond arguments that while the South wishes to live and compete in a new modern free world, the North only aspires to go back to the bondage of the dark ages.
A very influential Yoruba monarch once threatened to drown Igbos resident in Lagos in the lagoon, yet, not even a single shop owned by an Igbo man was burnt in Lagos as a result of that threat. Of all the cat and dog fight between the Yoruba’s and the Igbos, there has been no case of these two tribes attacking each other physically. It always end in long grammar which is how decent beings end their misunderstanding.
But, for the average Northerner, every disagreement must end in bloodshed.
A Northern Muslim doesn’t really need a reason to start spilling blood. No reason at all. He could start killing southern Christians living in the North for such a flimsy excuse as the shooting of a Palestinian by an Israeli soldier in the far away West Bank in the Middle East. Even a planned hosting of beauty pageants somewhere in Kano by the federal govt resulted in the killing of hundreds of Southerners living in the North. A cartoon of Mohammed drawn in far away Denmark by a cartoonist who was neither Igbo nor even an African ended in the death of hundreds of Igbos in the hands of these Northerners few years ago.
Even as I type this, the two terrorist groups (Boko haram and Fulani militants) currently killing and maiming thousands and displacing millions are from the North and they are all Muslims.
Despite all the brutalities of the govt, IPOB has never killed innocent people. Despite the volume of arms at its disposal, OPC has never attacked innocent people. Despite the gravity of environmental terrorism, the federal govt has carried out in the Niger Delta, neither MEND nor the AVENGERS ever bombed innocent people.
But even without provocation, the Fulani terrorists kill and maim innocent people and take over their land with the active support of the govt headed by a Fulani man and the security forces controlled by Fulani men.
Charles Ogbu is not accusing the North of anything here but the truth remains the truth and no matter how bitter it is, it must still be said.
It is the North that is drawing this country back.
All the killing of innocent people that have been carried out so far starting from the Igbo pogrom of 1945 in Jos and that of 1953 in Kano were all carried out by Northerners. And remember, those 1945 and 1953 pogrom against Igbos living in the North happened long before Nigeria gained independence. This is for you to understand how long the North has been in the business of spilling blood.
Are we all waiting for a Rwanda 1994 example before we summon up the needed courage to stop believing our own lie about Nigeria being one???
This country has since reached its elastic limit. It can no longer stretch again.
India and Pakistan were once a country. Today, look at India and look at Pakistan and tell me what you see.
The only solution to all the problem of this country is total balkanization. Anything short of this will only leave us with a peace of the grave yard which is no peace at all.
Facebook
Twitter
LinkedIn
PrevPreviousIPOB Press Release!!! ECOWAS Court trade Justice for Loans, Grant, Aid and Bribe from Buhari
NextIPOB: THE HYPOCRISY IN SSS INVITATION TO APOSTLE JOHNSON SULEIMAN WHILE LEAVING OUT ZAHRA BUHARI, SULTAN OF SOKOTO, AND NASIR EL RUFAINext