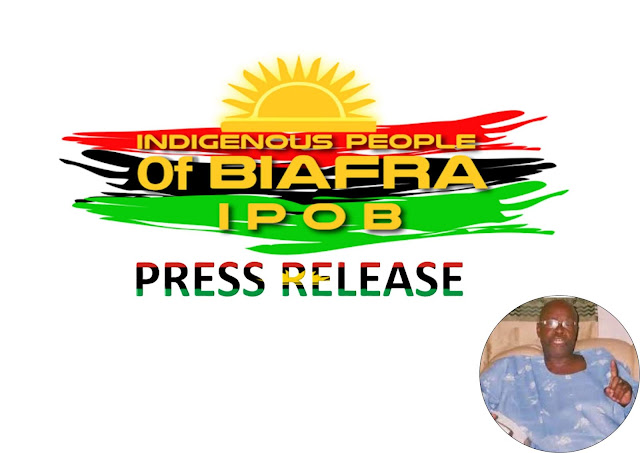 If the motive behind the sponsored news announcing the unfortunate demise of the Enugu based freelance “prophet” Anthony Nwoko and his previous association with our leader, is to dampen or deflect attention from the earth-shattering worldwide broadcast scheduled for Saturday, April 20, 2019 on Radio Biafra, then they better be informed that their plans have failed woefully. Our leader Mazi Nnamdi Kanu will broadcast, that mankind may know the evil that Nigeria has become. This diversionary tactics of planting a sensational story in APC sympathetic newspapers is meaningless and will never work. Whoever it was within the Nigerian security apparatus that dreamt up this ruse is a colossal failure because we IPOB have faced worse and come out stronger.

Should independent autopsy confirm any foul play in the reported death of Anthony Nwoko, then DSS and Army will be held accountable. Their recent spate of abductions and killings across Biafraland is proof if any is needed, that they would commit whatever atrocity they can, in the hope of implicating IPOB.

We mourn the loss of every Biafran and in this regard, we remember those shot dead in Asaba a few days ago on Monday 15 April, recent victims of Fulani terrorist attacks in Anambra, Delta, and Abia. Our heart also goes out to those unlawfully incarcerated for the unspeakable crimes at a Catholic Church in Ozubulu who have only two days ago regained their freedom.

IPOB is well aware that the Nigerian government and her security agencies will go to any length to stain our unimpeachable reputation in the hope of using it as a cover to continue their ongoing unreported war against IPOB. The media should be mindful not to prejudice the uninvestigated circumstances surrounding the passing of Anthony Nwoko in order not to become unwitting agents of dark forces that wish to tarnish the image of IPOB at any given opportunity.

As a movement rooted in the principles of democratic values and all it entails, IPOB will always welcome criticisms from all quarters because the Biafra we are seeking to build will be an open tolerant society.

We must, however, caution that Biafrans should be mindful of the opportunities their perceived hostility towards Biafra liberation might present to those seeking to exploit it for the benefit of the Fulani ‘One Nigeria’ caliphate agenda.

Enemies of Biafra within and outside the East will seek out every available avenue to damage the stellar standing of IPOB and her leadership and they will never ever stop until we recognize the danger they pose to us all. Without the benefit of any official police report on the cause of death, or a cause of death determined by a medical examiner, some journalists of Igbo extraction have already filed a report to their Yoruba bosses in Abuja and Lagos indicting IPOB. Those whose headline screamed “butchered in his house” failed to tell us why no single trace of blood was found in his house or his clothes.

If this APC demonic dictatorship had their way, they would have blamed IPOB for the sacking and conviction of Onnoghen in order to engineer enmity between South East and South South. Nothing is beyond them in their desperation to subdue every opposition.

We will flush out Jubril Al-Sudani the great impostor from Aso Rock. He must provide his DNA and face charges of high crimes and misdemeanors alongside Abba Kyari and the rest. Nothing our enemies does, even with the help of a media that doesn’t investigate stories, will stop IPOB from liberating Biafra from the shackles of damnation and iniquity that Nigeria has come to represent.

Facebook
Twitter
LinkedIn
PrevPreviousIPOB Deduced Nigeria Judiciary As Most Corrupt, Fraduluent, Injudicious And Evil
NextEXCLUSIVE INTERVIEW OF THE LEADER OF IPOB, MAZI NNAMDI KANU ON 30TH APRIL 2019 IN GERMANY BY THE SOCIETY FOR THREATENED PEOPLESNext