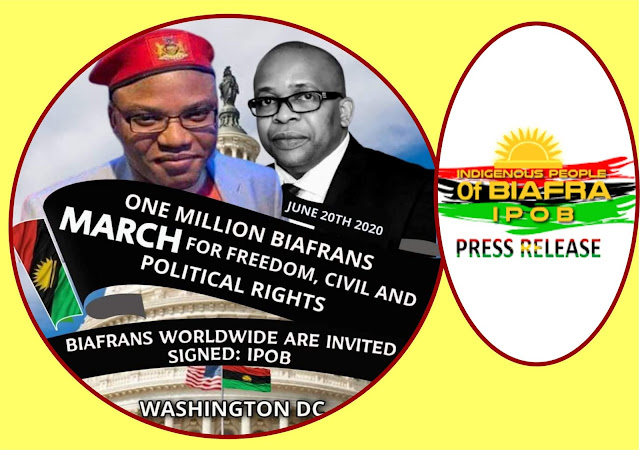 We the global and indomitable family of the Indigenous of Biafra (IPOB) ably led by our great leader Mazi Nnamdi Kanu wish to humbly notify Biafrans, friends of Biafra, persecuted Judeo-Christian communities in Nigeria, victims of Fulani terrorism and state sponsored genocide, including all who are reeling from brutal Fulanisation and genocidal land grabbing tendencies of the vandals from the Sahel aided by the regime in Aso Rock- about the upcoming IPOB One Million Man Match scheduled to hold in Washington DC on 20th of June 2020. Our great leader Mazi Nnamdi Kanu and his entourage will lead this march of Biafrans, the forcefully dispossessed, all victims of Fulani religious persecution, the enslaved and oppressed minorities in Northern Nigeria, friends of Biafra and lovers of freedom all over the world on the match towards the liberation of victims of neo-colonial subjugation in Nigeria on that fateful day near Capitol Hill Washington USA.

We are delighted to announce that we have sought and have been granted relevant permits by the various US  state and federal law enforcement agencies in Washington DC, Maryland and Virginia as millions of Biafrans and non-Biafran persecuted Christian communities from across the globe are expected to storm Washington DC for this once in a lifetime march to draw global attention to the unspeakable human misery and rivers of blood flowing throughout Biafraland and Nigeria at large.

IPOB’s determination to set free all captives trapped in the British created Zoo is unwavering and relentless. We have reached many and are continuing to reach out to all representatives, groups and associations of marginalised, opressed and subdued communities across Nigeria domicilled in the USA to be part of this historic event.

This unique event in Washington DC will bring home to politicians and policy makers in Capitol Hill the true state of deplorable human rights abuses, lawlessness and premeditated genocide of the Abba Kyari led regime of Fulani cabals in Nigeria ruling in the name of the late Buhari. The reign of Fulani terrorism, despotism, impunity, genocide against Judeo-Christian ethnic groups and judicial rascality of the Supreme Court of Nigeria will laid bare for the American audience to fully grasp the level of evil going on in Nigeria. It would also afford IPOB an opportunity to demonstrate our unsurpassed global might and prove to the entire world how serious, determined  and focus we are towards the enthronement of universal freedom, democracy and rule of law for all not just for Biafrans alone.

Only after this march will the world finally appreciate the level of human misery and pain inflicted by cattle herding, uneducatable and violent minority from the core Sharia Arewa North on the rest of the populations unfortunate enough to find themselves trapped in the British Colonial Experiment (BCE) gone wrong called Nigeria. What is happening today in Nigeria, with the help of a corrupt judiciary, is far worse than what obtained during the darkest days of apartheid in South Africa. All the ethnic cleansing going on in the Middle Belt, religious persecution of Christians in the north, genocide in South and forceful Islamisation of Christian enclaves will be better appreciated by opinion leaders right across the world after this march.

We are going to let the world know how Fulani illiterate ‘elite’ have steadily relied on British colonial patronage to float five of the world’s deadliest terror groups. How this same Fulani group have successfully perverted the judiciary especially the SupremeCourt in their now successful quest to perverse democracy. Not since the reign of the demonic Idi Amin Dada in Uganda has Africa witnessed such complicit judiciary in the persecution of innocent citizens and subversion of the spirit and letters of the law. Boko Haram, Fulani terrorist herdsmen, Al-Qaeda in the Mahgreb, ISWAP (ISIS in  West Africa Province) Ansaru and Fulani Bandits are all terror groups and killing machines set up by Fulani ‘elite’ who enjoy unlimited British support and patronage. The public in the USA will finally know that both Nigeria Senate and House of Representatives are busy promoting laws to give greater funding to terrorists who will one day attack American interests. Nigeria have succeeded in becoming the only state in Africa where terrorists actually run the central government.

We are calling on all Biafrans (Ijaw, Igbanke, Igala, Idoma/Igede, Annang, Efik, Ogoni, Igbo, Itsekiri, Urhobo, Isoko) all peace loving religious groups and associations from Southern Kaduna, across the Middle Belt down to the east and west living in America and other parts of the world to come out with their children and march for Freedom for All on because the pathway to our freedom is in our hands.