We Will Launch Radio Biafra In Daura, IPOB To President Buhari 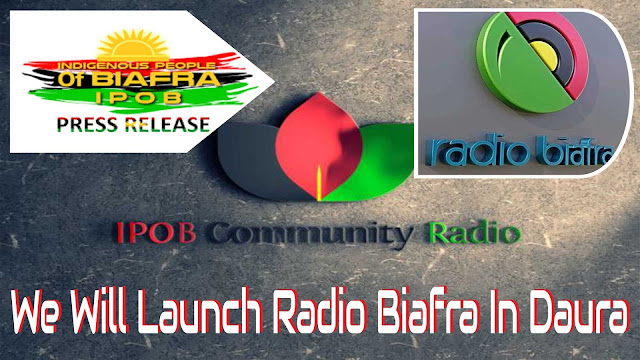 The attention of the global movement of the Indigenous People of Biafra (IPOB) ably led by our great Leader, Mazi Nnamdi Kanu, has been drawn to the approval of N654m by the Federal Government of Nigeria to monitor and crash Radio Biafra frequencies in the country particularly in South East and South-South geopolitical zones. This wicked but futile decision was taken during their Federal Executive Council meeting held Wednesday, 7th of October 2020.

That the Federal Government of Nigeria headed by a mask-wearing impostor, Yusuf Muhammad Abubakar, mapped out such a whopping amount of money for this unreasonable project despite its precarious economic state only confirms its jittery over the name IPOB. We thought they said we are miscreants? How come they are now losing sleep over miscreants?

The Nigerian Government and its agents have spent more than this amount in the past and nothing came out of it. We are expecting them to approve more money for the fight because they must understand that they will try but cannot withstand IPOB and its Leader Mazi Nnamdi Kanu. Such attempts in the past amounted to efforts in futility, and this time, they will fail again.

In fact, to prove to them how formidable we are, within six weeks from now, IPOB will launch Radio Biafra in Daura, the home town of the dead Buhari whose impostor presided over the FEC that took this foolish decision. Any time the impostor or his concubine, Aisha visits Daura she will receive Radio Biafra frequency and listen to the gospel of freedom by our Leader, Nnamdi Kanu. Then he will know that the cabal, their sponsors and slaves are no match to indefatigable IPOB.

In case they are unaware, Radio Biafra is not only received in Biafra land but in various parts of Nigeria. It is also the choice radio station of millions of audiences in over 100 countries of the world. We are well ahead of Nigeria, and it’s far too late to stop Biafra. We are a divine movement ordained by the Most High God in Heaven (Chukwu Okike Abiama) who created Heaven and Earth.

The Nigerian Government has failed in the past and it will quickly fail again in this fight. IPOB cannot be decimated until Biafra freedom and independence are fully achieved. Biafra is a divine project!

We know that the Presidency as usual, will try to use their slaves and ‘Efulefus’ (fools) in Biafraland and Nigeria to fight IPOB but without success. We are miles ahead of them all. We are aware that government recruited, and pays some of them just to use them for odd jobs but they should not forget that eternal regret is the reward of treachery.

We now understand why some traitors and saboteurs among Biafrans are making frivolous and concocted press statement on the pages of newspaper, attacking IPOB Leader, Mazi Nnamdi Kanu, in a way of showing their loyalty to the caliphate so they could collect more money from the windfall.

No wonder these Efulefus in Biafraland were busy mouthing their rubbish on social media and newspapers last week because they probably got a tip off that the Federal Government was about approving more money to fight IPOB.