We will shut down Imo state, if our detained mothers are not released – IPOB spit fire 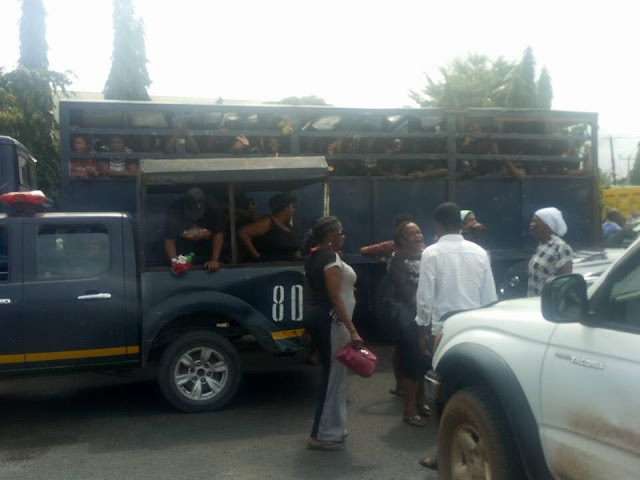 We condemn the sacrilegious arrest, illegal detention and barbaric torture of grandmothers arrested and held in military custody by Nigerian soldiers and police under the most appalling conditions. It is unheard of anywhere in the world that old women, some of them grandmothers, were arrested by army or police, teargassed, locked-up and tortured for exercising their constitutionally guaranteed right to peaceful assembly. 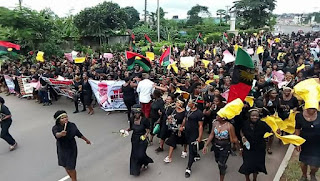 If there were any doubts before that Ala-Igbo and the rest of Biafraland is a Fulani conquered territory, the abominable treatment of elderly women on a peaceful March, arrested, tortured and interrogated like common criminals, have all but dispelled it. That Imo State government gave the go-ahead to northern Islamic army and police formations across Imo State to abduct and torture our mothers, is a clear confirmation that Rochas Okorocha and his government has no regard for us as a people.
The intention of the Islamic APC government is to intimidate and humiliate our people, women and the elderly. The abduction of grandmothers, some of them in their late 70s, is the worst kind of abomination. It is an invitation to anarchy because if by the close of business on Monday, August 20, 2018, IPOB will call for a civil uprising against the oppressors and their agents in Ohaneze Ndigbo and government houses across Biafraland.
This level of desecration and sacrilege will not happen in Arewa North neither will it be condoned in Yorubaland. It is happening in Biafraland because those that parade themselves as leaders (SE governors and Ohaneze) are cowards, appointed by the caliphate to act as their agents.
When Fulani terrorist herdsmen rape our mothers in the farms, destroy our crops and means of livelihood, you don’t see any army or police rushing to protect them. No Fulani terror herdsmen has ever been arrested by the Nigerian army or police. But the same long-suffering mothers, with nobody to protect them, are the ones being arrested, detained and tortured for exercising a constitutionally guaranteed right.
As with other conspiratorial atrocities in Biafraland perpetrated by the Nigerian army, DSS and police, Igbo governors as the chief security officer of their states alongside Ohaneze Ndigbo, must be held responsible. Even in the North where Rochas Okorocha comes from, they don’t arrest elderly women on a protest march.
It’s a pity that Nigeria security who cannot afford to stop or curtail Fulani herdsmen and Boko Haram terrorists rampaging and killing people in every part of the country, only demonstrate their might against elderly women who only came out to demand for their right. IPOB will not hesitate to alert the world that Okehi Police Station in Etche Rivers State is where the torture of Biafran women is taking place.
COMRADE EMMA POWERFUL MEDIA AND PUBLICITY SECRETARY FOR IPOB.
Facebook
Twitter
LinkedIn
PrevPreviousImpending Operation Python Dance III: Another License to Murder Biafrans – IPOB
NextIPOB: Release Our Mothers Biafra Worldwide Million Man Phone Call CampaignNext