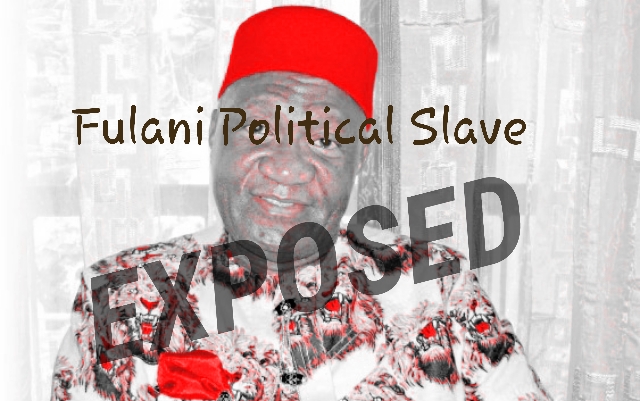 IPOB PRESS STATEMENT | 19 May, 2018
What the world will witness in Awka on Monday is a battle between good and evil, light versus darkness. On Monday the 21st of May 2018 at Ekwueme Square in Awka, the long-suffering downtrodden people of the East will rise up to say enough is enough. Our 50 years of Fulani captivity, aided and abated by Ohaneze Ndigbo will finally come to an end. All agents of darkness and iniquity with red caps, recruited by the caliphate immediately after the war in 1970 to serve their interest and enslave Igboland, will be exposed.
We know Ohaneze Ndigbo and their Hausa/Fulani masters have only three options left.
1. To seek to influence the media in Lagos and Abuja to report them favorably. We also know that Aso Rock media compliance and enforcement unit under a certain Brigadier of Arewa extraction has been putting pressure on some media outlets, without much success, to report prepared speeches by Nnia Nwodo and Chukwuma Soludo even if they are not read.
2. We are also aware of their plans to hire some Hausa/Fulani youths from Ebonyi State and Obiano’s political thugs to attend the event in Ohaneze Youth Congress OYI uniform to provide them additional security. Dave Umahi, Okezie Ikpeazu and Willie Obiano promised to supply the majority of these street urchins. These hired thugs will be paid a paltry 2,000 Naira each whereas Aso Rock budgeted and gave Ohaneze Ndigbo 25,000 for each thug they can manage to bus to the event.
3. Their last and final strategy, upon which all their hope rests is to prevent IPOB from getting to the venue or entering Anambra State altogether. Nnia Nwodo is presently in Onitsha, not Awka. IPOB Intelligence unit has assured that he will soon be located and his hotel made public.
We are fully aware that Ohaneze Ndigbo and Igbo governors have secured the assurances of their Fulani masters that army formations in the East would be in Awka to protect them. We expect existing number of roadblocks and checkpoints to be quadrupled. This was the same Nnia Nwodo that made reducing the number of checkpoints in Igboland his top priority. He has made a full u-turn and is the one now begging his Fulani masters to bring their army to occupy his father’s land.
If Ohaneze Ndigbo is genuinely loved by the people, why would they rely on Hausa/Fulani soldiers and hired thugs to defend them from the same people they claim they are representing. Such hypocritical stance is the reason why Ohaneze Ndigbo is bad for our people, bad for our survival and bad for generations unborn. They say one thing but do another.
They hope by distorting the news and reporting falsehood they can persuade the masses that they are the authentic mouthpiece of the people. We want to make it clear that it doesn’t matter how many Northern Muslim soldiers that come to their rescue, IPOB will break their lines of cordon as we did at Ebonyi and Ekwulobia in 2017. Willie Obiano and Dave Umahi seem to have forgotten what happened at Abakaliki and Ekwulobia. We shall remind them again on Monday.
Each checkpoint we encounter on Monday will be video recorded and streamed live on social media platforms for the world to see what Ohaneze and their Hausa/Fulani have turned our land into. Whereas other parts of Nigeria have dispensed with military occupation, in Igboland Ohaneze Ndigbo and Igbo governors have actively encouraged it as a means of holding the people down for their northern masters.
With the active connivance of Ohaneze Ndigbo and South East governors, Igboland is now effectively a Fulani colony where Hausa/Fulani soldiers are encouraged to kill, torture and detain at will. The inevitable brutality and actions of the Fulani military on Monday will confirm that previous massacres, torture, illegal arrests and detention of IPOB agitators were sanctioned by Ohaneze Ndigbo and South East governors. Monday is a date with destiny. We pray that journalists should remain neutral and report the events accurately without fear or favour.
Anybody seen with Ohaneze Ndigbo t-shirt will be regarded as a hired Hausa/Fulani thug and will be dealt with accordingly. In our finest tradition, we tell the world what we are going to do before we do it because we are freedom fighters. Any hired thug that wants to waste his life should join anything called Ohaneze Ndigbo Youths on Monday.
COMRADE EMMA POWERFUL
MEDIA AND PUBLICITY SECRETARY FOR IPOB
Facebook
Twitter
LinkedIn
PrevPreviousWhy We Are Against Nnia Nwodo’s Ohanaeze Ndigbo Summit – IPOB
NextBIAFRA: ONLY TRAITORS, QUISLINGS & COLLABORATORS WILL BE AT OHANEZE AWKA SUMMIT BUT THEY WILL NEVER GO UNPUNISHED – IPOBNext