Why We Are Against Nnia Nwodo’s Ohanaeze Ndigbo Summit – IPOB 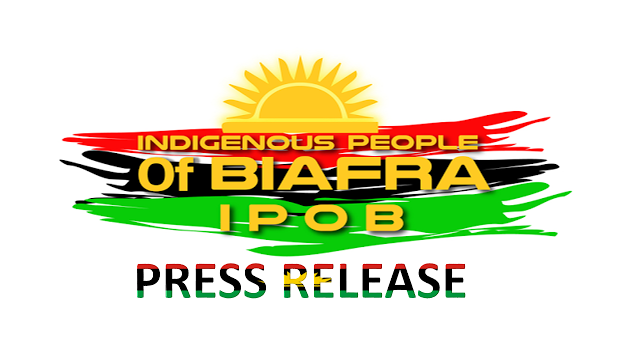 IPOB PRESS RELEASE | May 16, 2018
We the global family of the Indigenous People of Biafra (IPOB) feel the need to clarify why we are opposed to this particular Ohaneze Ndigbo jamboree slated to be held in Awka on the 21st of May 2018. Anybody or group that attends this event will be seen as an enemy of the people and a direct supporter of Operation Python Dance which was instigated by the organizers of the said Ohaneze Ndigbo Summit to eliminate Mazi Nnamdi Kanu and his family thereby leaving our land open to Fulani dominance in perpetuity. To associate with Nnia Nwodo’s summit is tantamount to an endorsement of mass murder of innocent agitators fighting for the freedom of everybody.
IPOB is not against those that hold the legitimate view that restructuring will best address the myriad of problems afflicting the masses. We are firm believers in democracy, plurality of opinion and divergence of views, so if during a referendum a majority of the people vote to adopt restructuring as the preferred option to outright break from Nigeria, we would be bound by it.
What we have issues with are traitors and collaborators using the cloak of restructuring to advance their personal political ambitions at the expense of the well being of the suffering masses. Dr. Alex Ekwueme, Prof. Tunji Braithwaite, Pa Anthony Enahoro, Prof. Ben Nwabueze, Pa Ayo Adebanjo, Chief Mbaziluike Amechi, Admiral Ndubuisi Kanu and many more notable elder statesmen have been at the vanguard of restructuring for over 20 years. None of those trying to use this jamboree in Awka now to advance their personal political interests ever supported the great champions of restructuring mentioned above. It wasn’t until the coming of IPOB led by Mazi Nnamdi Kanu that restructuring gained the irresistible traction it has today in Nigeria. To pretend otherwise will be an exercise in grand deceit.
That Britain, USA and other influential nations are exerting pressure on Fulani rulers of Nigeria to agree to restructuring is due to the determination of the IPOB led agitation for Biafra. What Nnia Nwodo and others in Ohaneze Ndigbo cunningly did was to seek the death of Nnamdi Kanu and those in IPOB that are responsible for shaking the fraudulent foundations of Nigeria to the point where restructuring has become inevitable so they can take over. Before anybody identifies with Nnia Nwodo’s Ohaneze Ndigbo summit, first ask yourself, why did he arrange with his northern friends to send  Fulani soldiers to storm Isiama Afaraukwu the home of Nnamdi Kanu to kill him and his parents? The harassment and intimidation of the Kanu household and IPOB has continued till today. What does Nnia Nwodo and Ohaneze Ndigbo stand to gain from the death of Nnamdi Kanu? These are questions every conscientious and morally upright person must ask.
What we IPOB are against are the murderers in Ohaneze Ndigbo trying to use the cover of a restructuring summit to hoodwink the people when all along these same men were against restructuring and acted against the interest of the very IPOB whose activism made restructuring widely acceptable. The same host governor Willie Obiano of Anambra State that superintended the countless massacres of IPOB in Anambra State is now proudly hosting a restructuring summit made possible by the same people he allowed the Fulani army to kill at will. What an irony!
Another reason why any respectable man or woman should stay away from Awka on Monday is this; never in the history of socio-cultural associations in Nigeria has any group done what Nnia Nwodo’s Ohaneze Ndigbo did in Biafraland. For Ohaneze Ndigbo to invite Fulani soldiers to kill Nnamdi Kanu, his family and IPOB members whilst pretending nothing happened portrays a man at peace with evil. Can anybody ever recall Afenifere inviting the Nigerian Army into Yorubaland to kill OPC members? When did anyone hear that Arewa Consultative Forum ever called on the army to go after Boko Haram or Fulani herdsmen both of which are Fulani dominated globally recognised terrorist groups that go about killing innocent people?
Now compare that with the attitude of an Ohanaeze Ndigbo that actively begged Abba Kiyari, Ali Monguno and DG DSS Lawal Daura, all Fulani men that never moved against their fellow Fulani herdsmen, to come to Biafraland to kill Nnamdi Kanu and IPOB members that made the restructuring agenda what it is today. Only a man without conscience and morally bankrupt will buy into the Nwodo charade in Awka. Look at all the organizers and tell us what they have done for the people either individually or as a collective. When Fulani terrorists invaded Enugu what did they do? The answer is nothing. It was the same IPOB that Ohaneze Ndigbo wants destroyed that chased away the marauders. Where then is the moral of anyone planning to attend this summit we ask.
Nnia Nwodo’s treachery cannot be wished away. He may have endeared himself to his Fulani masters but next week Monday will seal his fate forever. A new and bright version of Igbo history will be recorded from Monday the 21st of May 2018 onwards. Murderers should be punished not rewarded.
COMRADE EMMA POWERFUL MEDIA AND PUBLICITY SECRETARY FOR IPOB.
Facebook
Twitter
LinkedIn
PrevPreviousDerogatory Comment By Alhaji Abdulkarim Daiyabu: Ohaneze Ndigbo, SS, And SE Leaders, Brought This Insult On Biafrans – IPOB
NextWhy Nnia Nwodo Insist On Holding Ohanaeze Awka Summit At The Expense Of The Blood Of Igbo YouthsNext