why we set up Biafra guards: IPOB is against all forms of lawlessness, from the menace of Fulani herdsmen to kidnapping, armed robbery and cattle rustling 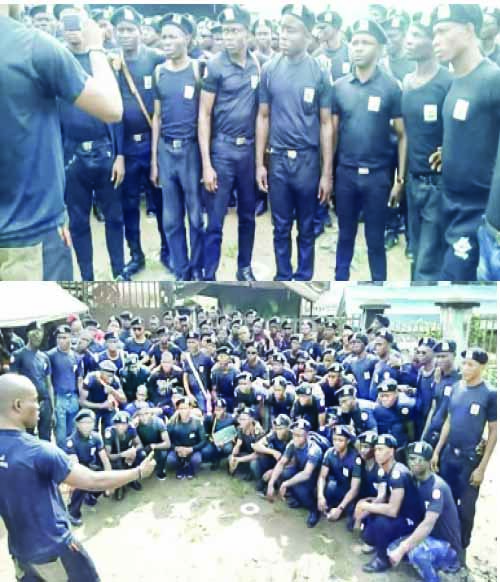 Publicity Secretary of IPOB, Comrade Emma Powerful
the Indigenous People of Biafra (IPOB) has debunked insinuations that it has set up a standing army, stressing that what it established is a vigilance group, Biafra Security Service, BSS, which would only gather intelligence and ensure that criminal elements do not compromise the safety and welfare of people residing in Biafraland.
Publicity Secretary of IPOB, Comrade Emma Powerful, who spoke exclusively to Sunday Sun, was very emphatic that the group would not be militarised as erroneously construed in certain quarters and in various online media reports.
Powerful said that members of the group were naturally peace loving people. He also dismissed as untrue the story that made the rounds that the leader of the group, Mazi Nnamdi Kanu, made uniforms for members of the vigilance group.
He noted that IPOB was interested in the well being of the people and ready to ensure the safety of its people returning from the North over the October 1 quit notice served on Igbo people in the North by a coalition of Arewa youths.
His words: “Mazi Nnamdi Kanu, the leader of IPOB, did not sew any uniform for these volunteers erroneously called Biafra soldiers. There is no standing Biafra Army and we emphasize the word NO. We have security volunteers just like you have vigilance groups. IPOB is legitimately concerned about the well being and safety of Biafrans all over the world.
“With October 1, 2017 looming, it has fallen on IPOB to ensure the welfare, safety and well being of Biafrans returning home to prevent what happened in 1966 from happening again. IPOB will not fold its arms and watch Hausa Fulani Janjaweed embark on another orgy of bloodbath directed at southerners living in the North. That’s why BSS was inaugurated to gather intelligence and to safeguard those returning home to Biafraland from the North.
“IPOB is against all forms of lawlessness, from the menace of Fulani herdsmen to kidnapping, armed robbery and cattle rustling. All these vices will be stamped out in the coming months without recourse to armed confrontation.”
On what the development portends, Powerful said: “It means that Biafraland will be the safest part of Africa where inward investments will drive the new industrialization policy championed by IPOB. We are concerned about the high level of hopelessness brought about as a direct result of decimation of the socio-economic landscape in Biafraland. High level of both youth and adult unemployment, galloping inflation indices, unbearable hardship leading to premature deaths everywhere. Biafrans can no longer tolerate this unacceptable level of human degradation.”
Asked if the world was seeing the initial stage of the militarization of IPOB, against the background of the establishment of BSS, Powerful retorted: “IPOB can never be militarized because we are naturally peace loving people. More importantly, we consider peaceful agitation to be far more potent than armed struggle, so IPOB will never resort to armed struggle.”
He observed that IPOB was not unmindful that some hawks who have been responsible for the hard line stance of the Federal Government towards Kanu prior to his release on bail were ever ready to cause trouble for the group by denigrating its name.
He said: “There are those who are naturally incompetent at running government that litter the corridors of power in Abuja, who see jumping on the anti-Kanu bandwagon to hide their incompetence and wickedness towards the masses. They are the same people that arranged for Almajiri children to attack Charly Boy who was merely expressing his opinion.
“These evil men at Aso Rock will go out of their way to foment trouble for IPOB. These are the evil men plunging Nigeria into crisis not IPOB.”
On whether Kanu was on a headlong quest for martyrdom, Powerful said: “Our leader has made it abundantly clear of his preparedness to make the ultimate sacrifice to ensure the restoration of Biafra. Therefore, threatening him with arrest, detention or anything else makes no impression on him. There is nobody like our leader and by the end of this epic battle mankind will testify that Mazi Nnamdi Kanu is a special breed. History will define and remember this generation because of Nnamdi Kanu and nobody else.”

Abia State Commissioner of Police, Adeleye Oyebade has declared the Biafra Security Service (BSS), which the Indigenous People of Biafra (IPOB) formed recently illegal.
The police commissioner warned at a press briefing in Umuahia, the state capital that those behind the security network, which he described as “unlawful and illegal” to retrace their steps.
According to Oyebade the Nigerian constitution recognizes only the Nigerian Police, Nigeria Army and the Department of State Service. He said that any other group claiming to be providing security without the backing of the constitution was illegal.
He further warned that the full weight of the law would be brought upon the promoters of the security outfit whom, he noted, were displaying videos of the “illegal” BSS on their social media network.
Oyebade said the police and other security operatives in the state would not fold their hands and watch unscrupulous elements to disrupt the relative peace in the state.
He restated that the police in synergy with sister agencies would make the state safe for business and economic activities.
Source
Facebook
Twitter
LinkedIn
PrevPreviousIPOB press statement: To Nigerian News Editors
NextPaul Unongo a minorities Northern willing tool, A man who could not rise in defence of his own people being slaughtered by the same Fulani cattle interest, should be grateful to IPOB leaderNext