PRESS RELEASE!!! ALERTING THE INTERNATIONAL COMMUNITY ON ANOTHER ROUND OF BIAFRA GENOCIDE BY NIGERIAN ISLAMIC ARMY 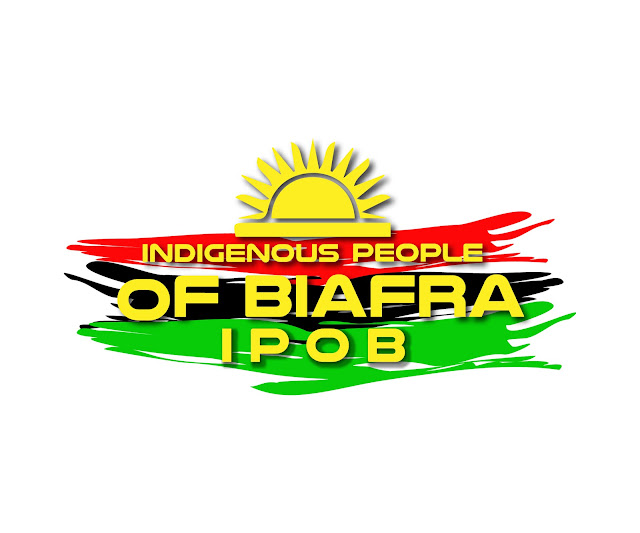 Nigeria is an enclave without laws something akin to animal farm and ruled at the whims and caprices of the Sokoto Caliphate. Nigeria is the biggest drawback to the emancipation of the black race from their current state of underdevelopment despite the enormous presence of both material and human resources. Nigeria having the highest concentration of black people in one geographic space has made it so impossible to advance both the mental and physical infrastructural development of the African continent resulting in lack of respect for the black man. Nigeria is not only a fantastically corrupt enclave but is as well a place where those who are ruling and those being ruled acquiesce to continue living in mediaeval times when nations and peoples of different color (except the black man or course) are exploring the boundless opportunities of the 21st century. It is essential to lay this background and imperative to assimilate its import in order to put in perspective the current dance of shame by the Nigerian Military in Biafraland.

The Nigerian army is a product of the Nigerian society and therefore it will be asking and expecting too much to assume that the military establishment will be any different from the environment it emanated from, after all the members of this institution are drawn from the same fantastically corrupt enclave. Nigeria and Nigerians are not only corrupt in the classic case of financial mismanagement they are unfortunately fantastically corrupt intellectually as well. This explains why the Nigerian military establishment does not know the fundamental reasons for which it was set up. Nigeria is a place where two opposing and diametrically different legal systems contest for supremacy. On the one hand, you have the sharia law operational in at least 12 states in the Arewa region and on the other hand the fraudulent Abdulsalami Abubakar 1999 Constitution. To make the situation worse, the fraudulent Nigerian Constitution which is regarded as the grund norm guaranteeing certain rights and duties on the citizens is implemented in breach because it is interpreted and applied to the citizens differently depending on which part of the contraption you come from. This explicates why the Nigeria military have decided to abandon its constitutional duties of defending the territorial integrity of the contraption from external attacks to take up not only the duties of the internal security agencies such as the police but also the function of law making as if they are in their comfort zone of decreeing everything decreeable.

The defense headquarters of Nigerian military had on the 15th of September through the director of defense information John Enenche a Major General (office general) declared the Indigenous People of Biafra (IPOB) under the leadership of Onyendu Mazi Nnamdi Kanu a terrorist group after enumerating what to him are the reasons which qualify the indigenous People of Biafra as a terrorist group. Wonders shall never end, I am convinced without a doubt that the Nigerian military is completely and sadly I must say out of touch with the real world. Who has ever heard of a whole nation being declared terrorists? We are at alert because we know that this is the prelude to their game plan of commencing their final solution to the Biafran questions which is to commit another genocide against the Indigenous people of Biafra and exterminate them from the face of the earth with the full connivance and support of the British government. When one considers the reasons enumerated by this “Major General John Enenche” that makes the whole Nation of the Indigenous people of Biafra terrorists, you wonder if he and the intellectually corrupt institution he represents are really of this world or from a very distant planet.

According to this “Major General John Enenche” the more than fifty million (50 million) Indigenous People of Biafra (IPOB) qualified to be tagged terrorist because they among other things blocked public access roads, extorted money from the public, attempted to snatch the riffle of a female soldier and possessed such very dangerous weapons as stones and broken bottles. How pathetic could a “Major General John Enenche” and the Institution he represents be. The truth of the matter is that the peaceful and nonviolent agitation of the Indigenous People of Biafra (IPOB) under the leadership of Onyendu Mazi Nnamdi Kanu has frustrated the Nigerian government from carrying out the wicked plan of the Arewa North of exterminating the Biafran People. Despite continuous provocations, intimidation, harassment and constant killings of peaceful agitators, the Indigenous People of Biafra have remained disciplined and nonviolent in their agitation. Notwithstanding unlawful arrests torture and all forms of inhuman and degrading treatment meted against Biafran people, extra judicial killings some of which are well documented, and rape, by the predominantly Islamic Armed Forces of Nigeria, the indigenous People of Biafra have remained peaceful in the exercise of their inalienable right to Self determination as recognized, enshrined and guaranteed by both the United Nations and the African Union charter. Their frustration that these Nigerian state sponsored acts of violence and instruments of terror to terrify our people into submission or push us into violent agitation which will in turn provide them with the needed ground and excuse to unleash mayhem and massacre us did not achieve their desired and intended purpose was the reason why the Arewa Islamic North working through the Nigerian Islamic military decided to embark upon this journey of no return and having committed these crimes against humanity shamelessly tried to justify their crime by declaring a whole nation of fifty million people as terrorist.

The Directorate of State of the Indigenous People of Biafra under the leadership of Onyendu Mazi Nnamdi Kanu uses this medium to alert the International community that at the behest of Muhammadu Buhari the Nigerian Military has embarked upon another round of crime of genocide against the indigenous People of Biafra to exterminate the Biafran people if that is what it will take to stop our peaceful and nonviolent match to freedom. The Nigerian government and its military must understand that no militant or terrorist group will give it the opportunity to come close to the village of its leader not to talk of invading the privacy of his home. The Indigenous people of Biafra (IPOB) under the leadership of Onyendu Mazi Nnamdi Kanu has exposed the fraud called Nigeria by speaking out the truth and challenged the fraudulent establishment. It is this truth that terrorize the slave masters as they behold their estate crumbling before their very eyes.

The complicity of the governors of the South East, the Ohanaeze ndi Igbo in the ongoing genocide against the Indigenous People of Biafra which is driven by envy, jealousy and greed but most especially by cowardice is what has given the Hausa fulani Islamic army the boldness to humiliate, maim and murder our people in cold blood. These people who have sold their souls to the devil seeing as the Biafran people unequivocally chose a leader for themselves, and terrified that they are not only losing the little influence they may have had but authority as well, conspired with their slave masters to commit the ongoing crime against humanity upon our people. To protect their little sphere of influence and continue to work against the collective interest of the Biafran people, they entered into alliance with the murderous Nigerian military in the service of the Arewa north. At the appropriate time, the Biafran people will hold them accountable.

We urge the international community, men and women of good conscience to be alive to its responsibility now and call the Nigeria government to order by compelling it to desist from further harassment, secret abductions and massacre of unarmed nonviolent Biafran civilians. We urge world leaders not only to impress upon the Nigerian government to respect the right of the Indigenous People of Biafra to Self-determination as stipulated by both the United Nations and African Union charters, but to hold them accountable for the ongoing genocide being perpetrated against the Indigenous People of Biafra. We shall remain undaunted in our conviction, we shall remain resolute in our belief and we shall remain firm and committed in our pursuit of freedom for the Indigenous People of Biafra notwithstanding the clear provocations from the Nigerian Military and other security agencies. We are a movement built upon principle and discipline and will not allow them to provoke us to fall into their trap.

The Nigerian state sponsored acts of violence and terror to terrify our people into submission cannot stop our resolve to extricate ourselves from the oppressive and humiliating servile existence imposed upon us in the contraption called Nigeria. The Indigenous People of Biafra (IPOB) under the leadership of Onyendu Mazi Nnamdi Kanu affirms our immutable right to determine our cultural, economic and political system as a people, as well as our right to Self-determination as guaranteed and proclaimed by the United Nations Declaration on the Rights of the Indigenous peoples to Self-Determination and Articles V, VI, VII and XII of the African Charter on Human & Peoples Rights (ratified and domesticated by Nigeria in 1983.