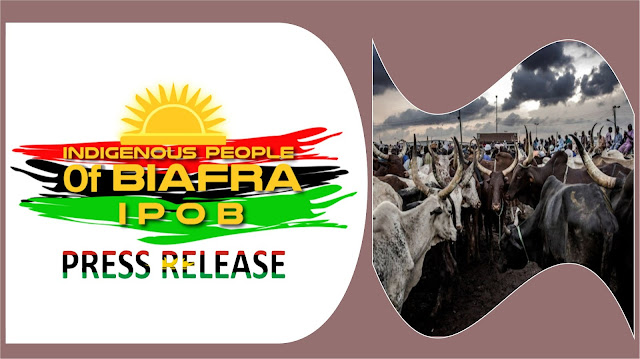 It is exactly the same way Satan asked Christ to bow before him in order to possess the riches of the earth is the same way Buhari and his Fulani brothers intended to force us Biafrans to bow and accept Ruga Settlement for riches that is in our land. We have rejected Nigeria forever and whatever that looks good and bad in her. Fulani people should keep their Ruga Settlement till eternity in the north, we don’t care about the gains and losses. Our total desire is to restore Biafra sovereignty and independence, nothing more.

Southern Nigeria, Middle Belt particularly Biafrans must understand that Ruga Settlement is totally to fix Fulani with the indigenous people that will cause them harm in the near future. How can Fulani kill pregnant women, children, displace people out of their homes and their God-given ancestral land and still government have the temerity to force them to release land for them? Nigeria government and her security agencies have refused to arrest these killers and ready to kill anybody who raised eyebrow against the Fulani terrorist Herdsmen and their mode of operation against the indigenous population that make up the British company called Nigeria.

The use of force to establish Ruga Settlement for Fulani in all the 36 states of Nigeria is a clear indication that Nigeria government is behind every attack on people by Fulani Herdsmen since year 2001. Federal Government of Nigeria realize that since their orchestrated attacks on innocent people wasn’t giving them much desired result, they decided to impose Ruga establishment program on the people. IPOB said no to it and that can’t happen on any of Biafran soil. Ruga Settlement for Fulani and National Livestock Transformation Program (NLTP) are the same but cannot be allowed here in Biafraland no matter the high level they take it to because it is all about taking over our ancestral land by force.

We cannot rule out that Igbos are involved in the cattle business but don’t have Herdsmen who live and wander inside the bushes and forests across the country because our people are different set of race on this planet and does not behave like Fulani people who nomadic and marauders. We are still wondering why the federal government and Fulani people are desperate in looking for Ruga Settlement in our land, forgetting that our people cannot accommodate them in our little space where we occupy.

Fulani contributes nothing only violence and criminality in the society and Nigeria economy, you can imagine how they were killing people in Plateau, Benue, Taraba, Southern Kaduna, Enugu, Ebonyi, and Delta States. We must do the needful to defend ourselves and our properties by stopping this aggression, violent incursion and land-grabbing no matter what it takes to do so.

IPOB will support ranching business but in your own land not forcing people to release their ancestral land to anybody or Fulani people. IPOB is a peaceful movement and must remain so but cannot allow anybody to trample on us by forcing our people to release their ancestral land to them. We are aware that cattle business remains personal business in Nigeria and cannot change today. We advise the federal government of Nigeria and those behind this evil plan to retrace their steps before it spills over, claims more innocent lives and becomes uncontrollable.

The community ancestral lands are gifts from the Most High God handed over to them to dwell on which must not be taken over under any guise by the government or Fulani. We challenge Fulani Islamists terrorists to do their worst after the expiration of the so-called 30 days ultimatum as was widely reported in every national and international media, we are anxiously and eagerly waiting for them in whatever shape they may want it.